How Eighty Years of Man-Hunts Influenced My ‘Hunting Club’

Scott's note: Nick Kolakowski returns here this week, and he's come to talk about his new book, Boise Longpig Hunting Club.  As I know from reading a bunch of Nick's other stuff, including his two novellas, A Brutal Bunch of Heartbroken Saps and Slaughterhouse Blues, Nick has a particular talent for writing scenes of ferocious action.  Nick and I have talked about action movies on occasion, so I was curious to hear if he applies to his writing anything he's learned from watching these kinds of films.  What kind of action that works on film works, or doesn't work, in prose?

Well, let's hear what Nick has to say about it.

How Eighty Years of Man-Hunts Influenced My ‘Hunting Club’ 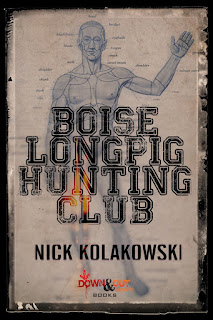 Many years ago, I heard a story about the filming of John Woo’s Hard Target (1993). And as the saying goes, if it isn’t true, it ought to be. Apparently Woo wanted the movie’s star, Jean-Claude Van Damme, to kill dozens of guys during the final battle, which takes place in a giant warehouse filled with moldering Mardi Gras floats. Someone else—maybe it was Sam Raimi, who was hired to oversee the set—told Woo that it would take too much time to kill that many guys; they had to keep the killings to a “reasonable” 20 or so.

I re-watched Hard Target when I was plotting my new thriller Boise Longpig Hunting Club. My book’s protagonists end up hunted by a lot of heavily armed dudes, and I was watching and reading everything that had a similar plot. At the root of this peculiar sub-genre, its urtext, is "The Most Dangerous Game,” a 1924 short story that was adapted into a 1934 movie starring Joel McCrea, Leslie Banks, and a pre-King Kong Fay Wray.

As a film, The Most Dangerous Game follows the plot of Richard Connell’s iconic short story relatively closely, albeit with the addition of a romantic subplot. It must have been exciting to viewers at the time, although its action seems incredibly corny in the context of modern, high-budget filmmaking. There is a moment with a mounted head that’s shocking, if only because we’re so used to black-and-white films being sanitized by the Motion Picture Production Code, which took full effect roughly two years after The Most Dangerous Game hit theaters. 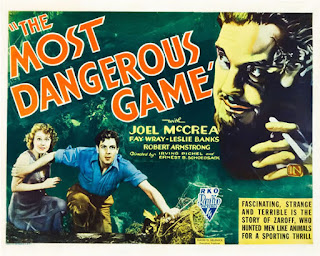 Decades later, John Woo riffed on the same plot with Hard Target,” which he layered with his signature action beats: white doves, slow-motion leaps, curtains of flame and shattered glass. If the movie feels clunky at moments, it’s because Woo had the final cut taken away from him in the editing room by Van Damme and a legion of studio executives. Nonetheless, you can still see flashes of his kinetic brilliance in the final product.

The variations don’t end there.  Surviving the Game is another 1990s movie that follows many of the “Hard Target” plot beats, but unless you really like Ice T or Rutger Hauer (surprisingly sane in this role), it’s a bit of a drag. The mounted-head gag from The Most Dangerous Game is revived, in slightly different format, and it’s easily the most memorable moment.

There’s also Battle Royale (2000), a Japanese film that features a school class abandoned on a deserted island, with students forced to kill one another if they want to survive. It’s very reminiscent of The Hunger Games, as well as the ultra-popular video game Fortnite, and your enjoyment of it is likely proportional to how much you like the idea of watching kids massacre their peers in creative ways for 113 minutes. (It does feature a cameo by Takeshi Kitano, who remains one of the coolest actors on the planet.)

All these films influenced Boise Longpig Hunting Club in one crucial way. Although I love action movies, I began to find the actual hunts monotonous. For all of its age-related issues and the hammy acting, the short running time of The Most Dangerous Game means the climax is pleasingly taut; by the time you get to the modern era, with Hard Target and Battle Royale, all the killing drags maybe 15 or 20 minutes too long. As someone tried to explain to Woo, there are only so many ways you can repeatedly shoot, stab, and vaporize people.

On the page, the potential for tedium is even higher. Pick up a copy of Battle Royale from your local library (it was a smash-hit book before becoming a movie) and give it a read; I found it very tempting to skim through the unending cascade of deaths, especially since they go on for nearly 700 pages. Or if you want a real insomnia cure, read any action-movie script—Walter Hill’s never-filmed adaption of John Woo’s masterpiece The Killer is a good example, and so is the House of Blue Leaves sequence in Quentin Tarantino’s original Kill Bill script. Blow-by-blow descriptions of violence become repetitive over the course of a hundred pages.

So when I sat down to write my hunt, I vowed to keep things as streamlined as possible; I didn’t want to test my audience’s patience with tens of thousands of words’ worth of people running around the woods. The ending is relatively quick, and it’s decisive in a very fiery way. If I’ve learned anything from my research, it’s that you need to give your audience what they want—whether they’re viewers, readers, or hunters.
You can pick up Boise Longpig Hunting Club here.

Actually the Hunger Games is reminiscent of Battle Royal since the movie was influenced by the book of the same name and it came first.