By Claire Booth
This week I have a cover reveal for you. The next Sheriff Hank Worth mystery will be called A Deadly Turn. 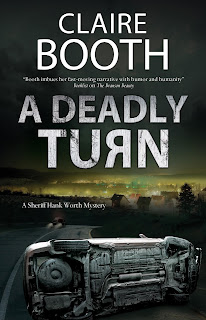 You’ll notice the cover is a lot different from the previous two books. That’s because I’ve switched publishers. Severn House, my new home, decided to take the look of the series in a new direction (but don’t worry—it’s still the same Hank, along with deputies Sheila and Sam). I love the way the graphics of the title echo the depiction of the car crash.
And that’s what A Deadly Turn is about:
Sheriff Hank Worth pulls over a speeding car full of teenagers on a Saturday night, but instead of giving them a ticket he delivers only a stern warning and instructions to go home. When he responds to an urgent call minutes later, he realizes he made a fatal error of judgement—the car is wrecked and each teen is dead.
Struggling to come to terms with his role in their deaths, Hank desperately searches for proof that foul play caused the crash. His suspicions grow when he discovers an unidentified body in the home of one of the dead teens, and a teenage friend of the crash victims is found after apparently attempting to commit suicide. Hank believes the incidents are connected, but those around him disagree.
Is Hank right, or is his guilt making him search for answers where there are none?
A Deadly Turn comes out March 1, 2018.
Posted by Claire Booth at 3:00 AM

Woohoo! A new one! Since it is March 2019, I was not suprised to just go check my library and find they do not have it listed yet.Bummer about that, but so looking forward to the new one.

Thanks, Kevin! I'll keep you updated!