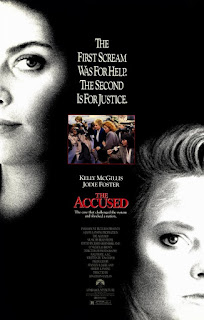 "The Accused" is more gut-wrenching today.

Thirty years ago Hollywood, whether by choice or chance, did something right. Directed by Jonathan Kaplan ("Over the Edge") The Accused, starring Jodie Foster and Kelly McGillis, was released in October of 1988 and would eventually become a highly regarded example of American cinema, winning Oscars, Golden Globes, BAFTAs and more.

The film is brutal and hard to watch, but important. Necessary. The movie begins, a young woman, Sarah Tobias (Jodie Foster), is seen beaten, terrified and running for help after being gang raped in the backroom of a bar. Despite the bar being crowded, no one comes to her rescue and some patrons even watch and cheer. After escaping she finds herself victimized again as she and her, at first reluctant, state appointed lawyer (Kelly McGillis) try to bring her attackers and the bystanders who did nothing to justice.

Details of the fictional, though inspired by real events, tale mirror current news and headlines. Within it’s clean, noir-inspired story telling "The Accused" highlights the public’s tendency towards victim-blaming and emotional separation.

We see Sarah viciously cross-examined during the trial. She is questioned about past relationships. What she was wearing the night of the rape. Whether she was drinking. What she was doing out alone in the first place. An insinuation that Sarah was complicit in her own attack. The questioning of a victim’s personal life, including sexual history and preferred dress, is a process that continues today. In 2016 a convicted rapist in London was granted a retrial after previous romantic partners of the victim gave testimony regarding their sexual relations with the woman. BBC

The nature of complicity is further examined in the movie when those who watched and cheered the rape are also put on trial. At a time when powerful men are finally being brought to task for their disturbing behavior, think Weinstein, Cosby and Nassar, we are beginning to underline the importance of taking down the environment that allows rape to happen. Imagine the amount of people who knew about Jerry Sandusky’s abuses and allowed those kids to be abused or helped in the planning and cover-up. CBS

The film echoes recent real-life examples of classicism, as well. One attacker is a young college student, aggressively supported by his wealthy and powerful father, pledged to a fraternity and looking forward to a bright future. His place in society is used against the victim and informs his lesser charge and lenient sentence. The disregard for the victim and compassion for the perpetrator is frighteningly similar to the Stanford rape case of 2015. USA Today

Recently, I watched "The Accused"again and it left me with the same feelings I had when originally viewing. Stomach turning sadness. Anger and rage, but my anger has doubled, as it seems our society has not changed so very much in these thirty years.
Posted by Marietta Miles at 10:16 AM