What follows is an interview with Chris Offutt, author of two novels, "The Good Brother" and his latest "Country Dark" which I review today over at Unlawful Acts. Offutt also has two short story collections "Kentucky Straight" and "Out of the Woods". He has written for TV and movies and has a couple of essay collections published as well.

David: Somewhere in the first few pages of “Country Dark”, your novel became a deliberate slow read for me as a way to increase my enjoyment of the book. There is a sense of sound in the words, each sentence as important as the last. I know this is kind of a broad question, but can you talk a little about the poetry in your writing and your process to get to the final draft? 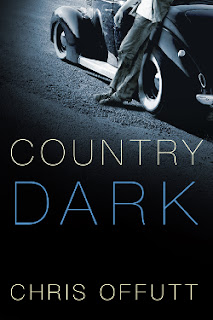 Chris: As you say, each sentence is important.  The precision of language is important to me as a writer, and also a reader.  When I work, I hear rhythm and cadence, off-rhyme, slant-rhyme, assonance, and tone.  Mainly I work in a visual fashion.  I see with great clarity what I imagine, then try to record it with care.  Dialogue is similar—I watch the characters and listen to what they say.

Writing fiction is the best way I’ve found to quell the restlessness of my mind.  By fully engaging the process—paying attention to everything the characters do and say, observing the landscape they inhabit—all this provides a kind of euphoric escape for me.  I feel better for having written, despite the challenge of the task.  The more I seek precision of language, the better I feel later.

I have long believed that language is the foremost tool of humanity.  Like any workman, I try to maintain my tools and use them in the best way possible.  I strive for meaning, sense, and clarity with every line.  The kind of book I like to read communicates multitudes in every sentence—description, action, imagery, emotional insight.

As far as getting to the final draft, I just keep revising until I’m satisfied.

David: One of the takeaways I had of your Harper’s essay, “In The Hollow”, is that the people of the Appalachians are not going to become a homogenized version of an American. You have become a spokesperson for the people of Appalachia. I’m not asking you to get political, but what is that we on the coasts and in the big cities get wrong with the area as well as the people? What is that we don’t understand?

Chris: What most people everywhere don’t understand are the limits of their own mind.  It’s easier to be close-minded and believe stereotypes and myths instead of learning about others. This is particularly true for people from big cities.  Often they consider themselves urbane and sophisticated by virtue of where they live.  It rarely occurs to them that they are provincial in their thinking.

When people in the northeast and the west coast learn where I’m from, the jokes start, jokes that are never funny.  Shortly after that comes the under-estimation, the assumption of stupidity.  It rarely occurs to people that they are dealing with an individual who is just like them, but with a very different background. In my work I try to provide insight and understanding of the eastern Kentucky culture. 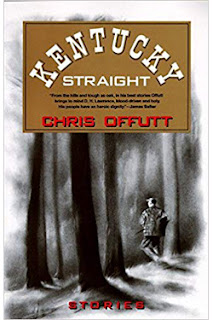 Chris: A good screenplay is a blueprint for production that must convey information to all the departments involved—props, wardrobe, director, actor, cinematography etc.  Then that group of strangers work together to make something that another group of strangers will watch on a screen.  Once I understood that, I was able to assemble a screenplay.  Movies and TV are a visual medium.  I suspect that working in that field helped hone the visual side of my imagination.  However, it’s too early to know for sure.

Teaching creative writing has the same influence on my writing as every other part-time job I’ve ever had—over 60 of them now.  Each job offers me the freedom to devote large chunks of time to my work.  Each job had its benefits and drawbacks.  Teaching puts me in a literate environment with access to libraries and bookstores.  Being a screenwriter paid more but took up more time, and was a very high-pressure environment.  I liked being a dishwasher best—simple task, free meals, and no anxiety.  Unfortunately it didn’t pay well.

The biggest influence on my writing has been observation, listening, talking with strangers, travel, solitude in the woods—and reading.

David: Second, are we going to have to wait another twenty years for your next novel? Or, maybe the politer question would be, what’s next for you?

Chris: I wrote two novels that I was not satisfied with.  They were set in Kentucky, one in Louisville and one in Lexington.  It turns out that in fiction, as with life, I’m more comfortable in the woods than cities.  I am currently at work on a novel set in the hills of Kentucky. 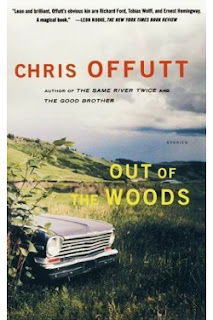 David: Your two short story collections, “Kentucky Straight” and “Out of the Woods”, are highly regarded. Every year critics talk about the death of short stories and yet the form persists in its existence. What is it the attraction to the form as a writer and even as a reader?

Chris: Readers buy far more novels than collections of short stories.  Publishers are reluctant to publish them except as a first book from a young writer.  Since there are few collections every year, critics start their incessant talk about the dying of the form.
As a writer, the attraction is very simple—I can experiment within a short story and learn the results quickly, good or bad.  If the experiment fails, it’s easier to discard fifteen or twenty pages than it is to shelve a 250 page novel.

As a reader, I’m always interested in short stories.  The form is compressed by its nature, and I can learn from reading stories.  Most collections are first books which means the writer has absolutely nothing to lose and is willing to take enormous risks on the page.  That gets harder the more you write, the older you get, and especially with novels.

David: Give me five (or more) Appalachian books or writers to read. Genre does not matter.


River of Earth, by James Still
The Hawk’s Done Gone, by Mildred Haun
The Stories of Breece D’J Pancake, by Breece D’J Pancake
The Tall Woman by Wilma Dykeman
One Foot in Eden by Ron Rash
Hell and Ohio by Chris Holbrook

A look at Northern Irish Noir

Anjili Babbar and Myron Strong are at it again. Inspiring. Organizing. Advocating. Doing. They are hear today to tell us about the Dashiell ...