By Claire Booth
I just finished watching the true crime documentary Evil Genius on Netflix and man, am I conflicted about my final opinion of it. It was both really good and disappointing at the same time.
On the one hand, it was a very well done look at the infamous "pizza bomber" case, where a delivery driver robbed an Erie, Penn., bank with a bomb locked around his neck. He was quickly caught by police, but the bomb exploded as he sat handcuffed in the middle of the street; he was killed instantly. (Warning: spoilers ahead.) 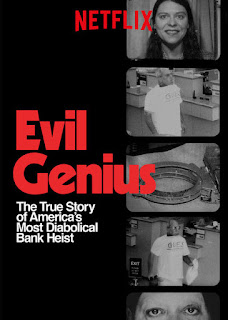 The four-part series lays out the bizarre crime and ensuing law enforcement investigation nicely. But if you’re looking for answers – like, say, who masterminded the plot and was the actual "evil genius" – you’ll be disappointed. I think this is the fault of the title more than anything else. It’s too definitive for what ultimately played out. The police investigation was unable to determine who came up with the idea to strap a bomb to a pizza delivery man and send him into a bank.
It could have been Marjorie Diehl-Armstrong, a woman with a long history of mental illness who was already linked to several suspicious deaths. Or it could have been her former boyfriend, a man named Bill Rothstein. Diehl-Armstrong is the evil genius of the title, but there was nothing specific presented in the documentary that clearly proved it was her instead of Rothstein. Both were intelligent, grandiose personalities who existed on the fringes of society.
Rothstein presented himself better, which made it easier to label the prickly, erratic, anti-social Diehl-Armstrong as the instigator of the plot.I’ll add an aside here that Diehl-Armstrong did have well-known homicidal tendencies. She’d been previously charged with murder and acquitted, and was accused of killing the boyfriend she had during the time of the pizza bomb plot. So she wasn’t some brilliant person who never got caught, and she wasn’t a person who was able to present a different, false face to the world. Those talents appeared to belong to Rothstein.
So who was really the genius? The documentary does a lot of things well, but answering that question isn’t one of them.
Posted by Claire Booth at 3:00 AM

I wrote a novel in 1995 with exactly this plot--a guy hooks a bomb to a guy and makes him rob his own bank. At the time, I titled it "A Perfect Crime." It ended up in an auction and eventually got down to Random House and St. Martin's. My agent at the time, Jimmy Vines, was shepherding it. At the end, St. Martin's offered a $50,000 advance and Random House offered $45,000. Jimmy told me it was my call and it was then I made the biggest mistake of my life and chose Random House, because they were... Random House. Shortly after our deal, Bertelsmann bought Random House and my novel got shitcanned. It later came out from a small indie as "The Perfect Crime" my original title (R.H. changed it to "Over Easy" a play on the setting, New Orleans, and they wanted a series based on it, with plays on The Big Easy on each one. Ann Godoff, then prez of R.H. told Jimmy that when it came out not only would it come out on the NY Times bestseller list, but would come out as No. 1, which they could guarantee as they planned the simultaneous launch of 50,000 copies in paperback from Ballantine and 5,000 copies in hardcover from Random House. And, then came Bertelsmann... As of now, it's available by the title of "Bomb" from another indie. When I wrote it in 1995, it was a crime I'd dreamed up and I was anxious to get it published before some real-life outlaw also thought it up and preempted me. It eventually happened, but not before my book got a contract. I'm still suffering from the financial aftershock this all caused. But, I can claim the idea of this robbery at least...

I wanted to like this one a lot more than I did. Watched the first few episodes and just didn't get a sense that there was concrete momentum. Diversions took too long without an overall sense of where things were going. Was bummed because it was put together in an appealing way.