One benefit of being a procrastinator is, if I have an idea for the blog but news breaks Friday morning that makes me feel I have something to say, I can often switch gears.

I was blindsided by the emotions I felt when I learned that Anthony Bourdain had died by suicide. I don't leave a lot of space in my emotional life for celebrities and people I don't know, but Bourdain's work had meant something to me. His book Kitchen Confidential, remains one of the only mainstream places I've seen Portuguese food described so lovingly, and set as inspiration. His attitude on his shows seemed to make the world smaller, and he never shied away from telling the viewer what was going on in a country he was visiting. I just liked him, and I don't feel I need to justify it, really. He was enjoyable, he hung out with Iggy Pop, he was a loud, angry male voice in the #metoo movement.

It makes me sad that he felt suicide was a better option than living. 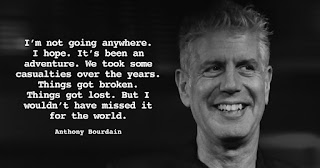 But if there is one thing celebrity suicide does, it is show you how the people around you view suicide. Two celebrity suicides in one week will inundate you with the opinions of everyone you know. I hate to see people angry at a person who has died by suicide. I'm choosing my words carefully. I'm not saying "killed themselves" or "committed suicide" because it elevates the role of the victim too much. Suicide occurs, most often, at the end of a long struggle with a debilitating illness. Suicidal depression and other mental illnesses are illnesses. Yes, it's horrible that Bourdain's daughter will grow up without him. But to say he is selfish, or that he didn't think of her is a strange take. Bourdain died at 61 years old. Kate Spade was 55. I don't know much about Kate Spade, but Bourdain had been open about struggles with heroin, self doubt, and other clear markers of depression for his entire career. To say it is selfish to finally lose the battle against an illness that has been with him since (at least) college is crass.

At worst - these ideas add to the stigma of suicide that makes it difficult, if not impossible, for those struggling to ask for help. If your mental illness is already telling you that you're a piece of shit, hearing people say that people who consider suicide are pieces of shit doesn't switch gears. If you believe that only selfish people who don't love their children complete suicide, you may tell yourself you can get through it on your own, because clearly you love your children. Often, with celebrity suicide, we discover that the unthinkable has happened in the middle of a tour, or a filming schedule. When the person has seemed productive and happy. Then, they are alone and they are gone.

People commit suicide for a lot of reasons, and not all of them are directly tied to mental illness. Almost all of them are tied to immense amounts of pain. If you wouldn't say what you're about to say about suicide to someone who's loved one died of cancer, think twice about saying it. What we need is a de-stigmatization of mental illness and specifically suicide, so people can seek help. What we need is to not panic any time someone says they have suicidal ideation, so they can talk about it without being judged or thrown into a hold.

The other thing we need to do, is look at the loved ones of people who have died by suicide and promise ourselves we will not state directly or imply that their parent/lover/friend/family member didn't love them. That we won't call this person they loved and are grieving selfish, or any other ugly term we reserve for people we don't like.