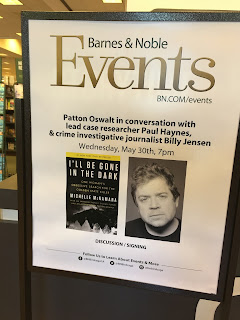 The nation has been riveted lately with the arrest of a suspect in the case of the Golden State Killer, who raped and murdered his way through California forty years ago and then disappeared more completely than almost any other serial killer in history.
But the rest of the country’s got nothing on the Sacramento area. This is where he started, breaking into homes and raping women. Known then as the East Area Rapist, he eventually upped his game by deliberately choosing houses where a man was home as well. In all, he was suspected in 27 rapes and five additional attempts here from 1976 to 1979.
If you lived in the eastern suburbs of Sacramento during that time, you have a story. Fathers kept baseball bats by the side of the bed. Families slept together in the living room, thinking it was safer. Gun sales skyrocketed. Children weren’t allowed outside. Each story is personal, not abstract. The fears were well-founded, and present night after night. The monster could quite literally be at your door.
And it turned out he was that close. Joseph DeAngelo lived mere miles from the scenes of the first reported rapes. The 72-year-old was arrested on suspicion of murder April 25 after law enforcement traced DNA left at crime scenes to a familial match in a database. And Sacramento reeled. The alleged killer lived here quietly for decades. And so a whole lot of us – including me – turned out on Wednesday to hear more about the only major book to be published on the case: Michelle McNamara’s I’ll Be Gone In The Dark: One Woman’s Obsessive Search for the Golden State Killer.
The event was held at ground zero – the Barnes & Noble only miles from where DeAngelo lived in the suburb of Citrus Heights. More than 450 people packed the place. I got in line at 4:30 p.m. for the 7 o’clock event. The prime chair seating was long gone, but I ended up with a semi-good standing spot. 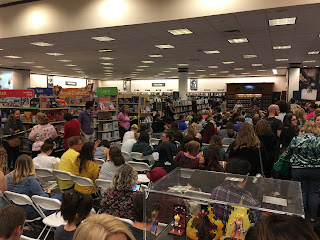 As everyone who’s paid even a bit of attention to all this knows, McNamara died in 2016, before she was able to finish I’ll Be Gone In The Dark. Her widower, comedian Patton Oswalt, has been on a publicity tour for the book, which was doing pretty darn well when it was released in February. (I’ve started calling this time period B.A. for “before arrest.”) Then DeAngelo was arrested. And now in the A.A. (after arrest) time period, the book and anything associated with the case has gone through the stratosphere.

Oswalt appeared Wednesday with the two collaborators who finished the book after McNamara’s death, researcher Paul Haynes and journalist Billy Jensen. They answered a wide range of questions from the audience, with Oswalt differing the more technical queries to the other two. He focused on his late wife and smiled when asked what he thought she’d be doing with DeAngelo under arrest.
“I’m a clown speaking on behalf of a crime fighter,” he said. “I can’t even begin to list what she’d be doing right now.”
I think she’d absolutely be following the DNA aspect of the case. Because, wow. This has such huge implications. A Contra Costa sheriff’s investigator created a fake profile on an open access DNA website called GEDmatch and uploaded the suspect’s DNA profile, which came from bodily fluids left at multiple crime scenes. (This is very different from well-known sites like Ancestry.com and 23andMe, which require an actual saliva sample and not just a on-paper profile, to help ensure fake profiles aren’t created.) There was enough of a familial match in the GEDmatch database for authorities to start tracing a family tree. That eventually led to DeAngelo.
The people who spoke Wednesday night were all clearly for using this kind of investigation to solve crimes. One person blithely dismissed privacy concerns. “Do you think people who feel that way will cause problems?”
“I think there will be some push back,” Haynes said, but within five years he thinks it will become standard. Okay. Having that opinion is one thing, but then he said this: “Who wants to be on that side, waving the flag for privacy and defending a monster like this?”
This is where I pause to catch my breath at the staggering incongruity and conceit of that statement. Being for privacy means you’re defending a rapist/murderer? Um, no. And one more time – hell, no. One does not equal the other. Haynes flat out demonized anyone with a legitimate concern about where this kind of genomic access is headed. This is pretty much brand new legal territory, and no one is served well by such blanket, inflammatory statements.
We’ll all be hearing a lot more on the DNA issue as DeAngelo’s charges proceed to trial, because I guarantee it will be litigated for years. As will the rest of the case. The crimes DeAngelo is charged with make him eligible for the death penalty, although no decision on that has been officially reached. Capital cases in California typically take years to reach a verdict, and this one has the added complication of involving four different counties and four different elected district attorneys with high stakes in where the case is tried and who takes the lead.
DeAngelo is charged with 12 murders. He is not charged with any of the fifty rapes attributed to the East Area Rapist. This was another subject many in Wednesday’s crowd were eager to address. In the 1970s, when the rapist began his serial attacks, the statute of limitations on those kinds of crimes was fairly short. This was, which Oswalt pointed out and I agree with, a generational thing. Those kinds of assaults were not treated as seriously as they are today. Now they’re considered quite serious, and there’s the recognition that technology continues to evolve and could one day crack a case that was unsolvable before (much like DNA has already done).
Haynes said he thought the statute of limitations on rape would change or be done away with in the next 10 years. I wish he’d had the right information, because time limits on rape cases have already been wiped from the books in California. The new law went into effect Jan. 1, 2017, for rapes that occur after that date, or any such crime that occurred before that date where the previous 10-year statute of limitations hadn’t expired. It would’ve been great for the overflow crowd hanging on his every word to have learned the correct information that night.
Afterward, people lined up for signed copies, still talking about the surrealness of a suspect being found almost within walking distance of the bookstore. One woman said she’d read the book at night and was scared by it. Then DeAngelo was arrested. “Then I was more scared knowing he had lived a mile from me my whole life.”
Have questions about this case? Let me know in the comments, on Twitter @clairebooth10, or on my Facebook page, and I’ll answer them next week.

The privacy / enforcement debate is a touchy subject and deserves more thought than what Paul Haynes appears to have given it.

It's rare for serial killers to stop unless they are caught (possibly for a different offense) or die. Did they offer any insights as to why this guy just stopped?

Dana, that is such a good question. Why did he stop? I'll definitely get into that in my post this Sunday.