An Overdue Tribute. A Timely Acceptance.


My father was quiet unless he didn't want to be. Sullen, unless moved. He was a dusk man who carried disappointment deep within his body. He revealed so little, I felt it my duty to get to know him. I would watch his eyes as he stared out the window into the street in front of our house. Hands behind his back, legs apart, standing so still I'd wonder if he were asleep on his feet. He'd take a breath that sounded as if he was filling gigantic bellows, shake his head, and exhale so slowly it couldn't have been very healthy. He'd stand at that window for an hour. As witnessing this was one of my favorite stealth guerrilla tactics to employ in the fight to know him, I'd attempt to sneak up behind him, take a place next to him, and stare as well. That's when I would be reminded of how fast, and attentive to her husband, my mother could be.

"Come on out of here," she'd say. "Leave your father alone. Go find something to do."

I like puzzles. I like mysteries, obvs. No one was more mysterious and puzzling than my own sire.

By the third time I walked over to him, took a pose matching his, and tried to force my kid's balloon-sized lungs to make the same oceanic motions, he decided to make room for me. I did everything he did, in mimicry, from scratching to dad noises. I even did the breathing. What I didn't do was stare at nothing, turn crestfallen, and seem to search the ripples in the puddles on Chitown concrete for answers.

Or a way out of there.

No one ever discusses it, but my father spent at least a month planning it in detail. Paying off the house. Taking out life insurance (back before suicide clauses.) Boxing us into his wishes by handling things his way before he split. It's the detail everyone overlooked when they explained away the events that shattered my family and set us all on individual paths of survival as someone's crazy. My father was rational, methodical, deeply motivated and deeply driven. He made love to his woman one last time, waited until her back was turned, put a handgun under his chin, and wrapped it up. When the insurance man turned up later, with condolences, and a check, and an insistent recommendation of a financial planner who could help my moms with all that money, it was hard to file it under lunacy when the dates on paperwork showed my Pops had closed out his earthly existence like a fella who gave two weeks notice. It was obvious to me at nine years old. Folks in shock and trauma lose their grip on children first. Left unattended, I examined everything, every folder, every cabinet, every drawer and box and cubby in the garage. I Encyclopedia Brown'd the whole thing. I bet, had adults not stormed in to fix everything (with hysterics and abuse) for my brothers and I a receipt for the bullets sourced to get the job done would have turned up. He had books on the eternal, undying spirit no one remembers him purchasing. Tiny scribblings of his own philosophical musings on death, of which his comfort seemed to increase after every successful shift, could be found in his most private possessions.

His final trip was planned so solidly, you wonder if he consulted a travel agent.

***
Remember Frank Miller's The Dark Knight Returns, where Oliver Queen, aka Green Arrow, explains to Bruce Wayne the trouble with his persona: 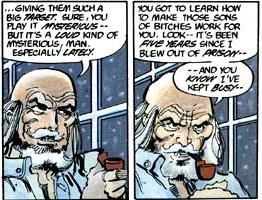 That was my old man. His story is exciting, but his plot convolution needed work.

He wasn't that hard to figure out. Perhaps that's why he never said anything. He was a sieve. A squealer. Seems like every choice he made betrayed his deep hurt. He had a look about him of a man already gone. Even while loving me, suffering my persistent glomming, doing the things good fathers do, he was only ever half there. I loved him, but I was like a loose penny, and he just didn't have any pockets to put me in. He seemed to keep me at a distance that kept the levels set. You couldn't hang anything on him. You had to watch him. Pester him. Stalk him. Camouflage yourself and stow away to be with him. He never felt like he was staying. Close to the end, it felt like he had already left. That what I had attached myself to wasn't him but some past possession of his he had left behind during a visit. Sometimes he felt like my father. Sometimes he felt like a remnant. The purple velour bag that contained the Crown Royal. What you're left with once the spirits—spirit—is long gone. The kind you take after the family party so you have something to put your crayons or loose change or baseball cards. The husk of identity you stuff with what identifies you. Worth only as much as it can hold. Worthless, until you need it to hold something.

I bugged him. I know I did. I confronted him, most often silently with my insistence of being in front of him as much as possible, but occasionally with my own choices to ignore any structure that kept me under control and limited my reach for understanding, even if a boy had no business whatsoever testing such things out of concern for his own safety. I scarred myself all the time reaching, searching, grinding. So did he. That's probably why I thought my name was "Boy, go find something to do." I'm sure he heard that as a kid. I did. Never from him, tho'. He just took a baby step over. He didn't invite me to stand or sit or come along. He just scooched over. I was raised by a young adult with grunts, scooching, annoyed breathing patterns, and the inevitability of death in the corners of his eyes. My father wasn't transparent, but he wasn't opaque. He was translucent. He was a translucent bag of air. Maybe ideas. A few mild intentions. And pressure. Lots and lots of pressure.

A scooch to the right. A grunt. An exhale. You'd think he gave me the universe.

***
Much has been made of how he died, but none lived with more potency of purpose than John Gardner. He made his living standing firm between fire and the property and citizenry of the City of Chicago it would have as its carrion. With an ax and his courage, he ensured a happy Father's Day for countless others. My young father stood toe to toe with Haephaestus each shift and went home before anyone could thank him. At his end, he wanted to be left alone, and he deserved that, regardless of how it made the rest of us feel. I am his youngest son, father and uncle to his grandchildren, grandfather to his great-grandchildren, and willing heir of his legacy. My final word on the matter is he saved enough lives to call the ball on his own. No one and nothing lives forever. No one lived bolder. He may have left me a lot of hard work to do, but we Gardners have been the sons and daughters of the City That Works since the migration. The manner and nature of his death is now an innocuous, hollow detail. How he devoted his life, and not how he chose his death, is the only way to know his soul's path. Nothing else could or should be taken from his example. It's simple. He lived, he served, and in nine short years, he taught me what it meant to give of himself.

It's now obvious I find myself with a platform right around the same time we're all careening toward perdition. I wonder if his slight scooch, the barest sliver of space next to him, was prophetic. The world is on fire. Good people are trapped inside. Children ripped from their parents. Children killing children. Bubbles of perception and privilege protected more than values, and principles, and babies. It's burning hot. Surely, death awaits.

Good thing I have my father's ax. He left it for me. All I had to do was pick it up. It was right where he was standing. This Father's Day, I finally saw past his absence. The next day, I heard the alarm.  Here I come, Haphaestus. Here comes that Chicago shit. You ain't ready. I am a Firefighter's son. I'll take the heat. This world can burn, but it'll never be hot enough for a Gardner. Hell is ten degrees too cold.

I was raised just fine. This is my final say on the matter.