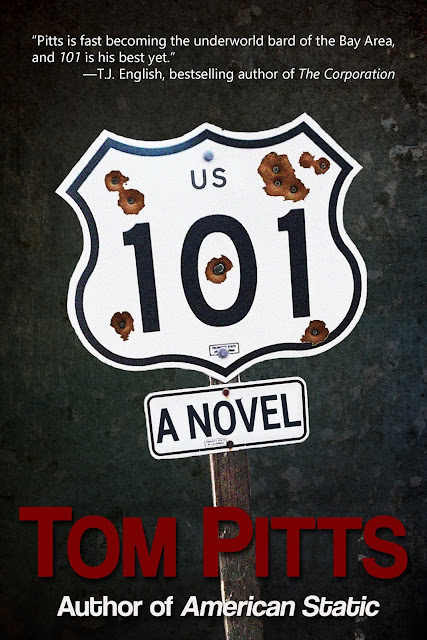 "Pitts is fast becoming the underworld bard of the Bay Area, and 101 is his best yet." TJ English

"TJ English has long been one of my heroes. He wrote a book called the Westies that I cite as life-changing (for me) so often that he actually wrote me and asked for a book. What was so important? It showed me how criminal life was not glamorous, how it was full of fuck-ups and assholes--that it wasn't the Godfather. Working class Irish hoods felt a whole lot more real than the Corleones. He also focuses his books on the lower echelon guys to build the story. They're not told from the top, but from the bottom. Even though the "big picture" is often historical and world-changing events. " - Tom Pitts

"This is the fourth cover I’ve done for Tom following Piggyback, Hustle and American Static. Tom is probably the most difficult author I’ve worked with, but not really in a bad way. In many ways he’s most similar to me. He knows when it’s not quite there yet and he will push to get it where he’s happy with it and I can never fault an author for that. It’s his book and he should be nothing but thrilled with the cover that has his name on it. Tom usually comes to the table with ideas already. He’ll shoot photos like the highway sign for 101, which is his shot, and when an author has an idea of where they want it to go, the changes and tweaks are all just details, not major reinventions. The advantage of working with a smaller publisher like Down & Out is that we involve the author to such an extent. Having an author be part of the design process and wanting them to feel happy with the result is critical. But Tom has made me work for it every time. But if the roles were reversed I’m sure I’d be a challenging client, too. I’m always willing to do as many drafts as needed to get it right." - Eric Beetner

On the cusp of pot legalization in California, Jerry runs afoul of some San Francisco bikers in the marijuana game. He flees straight up Highway 101 to Humboldt County to hide out deep in the hills at Vic’s, a reclusive pot farmer and old pal of his tough-as-nails mother. But trouble finds Jerry no matter where he goes and soon the bikers, a pair of stone killers, and a Russian weed tycoon named Vlad the Inhaler are all hot on Jerry’s trail.

Fallout from the unfolding chaos piques the interest of SFPD Detective Roland Mackie, when he learns Jerry’s host, Vic, is somehow involved. It opens a twenty-year-old wound, an unsolved case called the Fulton Street Massacre, and Mackie is willing to do whatever it takes to get a pair of cuffs on the elusive Vic.

When Jerry and his protectors are chased off the mountain and back down the 101 to an inevitable showdown back in the Bay, he learns Vic is much more than his host, he’s a mentor, his mother’s hero, and the toughest man he’s ever met.


With an unforgettable cast of characters and an action-packed plot, 101 is a wild ride through Northern California’s “emerald triangle.

"When we were hobos, I'd make squirrel pie. And one time Tom stole my squirrel and sold it to this guy, Charlie One-Arm (because he only had one arm) for a hit of dope. But then Tom brought that dope back and shared it with me. I like Tom." - Joe Clifford

"Despite the desperate, violent people he writes about in his books, Tom's a soulful weirdo with a tarnished golden heart...that he probably stole from somebody's grandma." - S.W. Lauden

On the subject of hobos..."Tom and I are early for a reading so we're waiting outside the bar. Which didn't open until 5, probably why it's closed now. Across the street a homeless looking guy is trying to get into a hotel but another homeless looking guy won't let him. The guy outside pulls the other guy out with him, they start throwing punches and Tom starts calling the fight like he's Jim Lampley. It was great." - Rob Pierce

"My introduction to Tom Pitts was his novella KNUCKLEBALL, which I'd come to expecting baseball noir. What I found was a compelling story, rooted in real characters. PIGGYBACK and HUSTLE were immediate must-reads for me, because here was a writer clearly in command of his art. Despite a well established track record of brilliance, Pitts managed to amazing me once again with AMERICAN STATIC.
Pitts is able to work with violence and humor, with real characters and extraordinary circumstances. Whatever Pitts does is an automatic read for me." -- Steve Weddle
Posted by Marietta Miles at 3:00 AM

Does Beetner do great covers, or what?

Looking forward to this one. Tom's books never disappoint even my stupidly high standards.