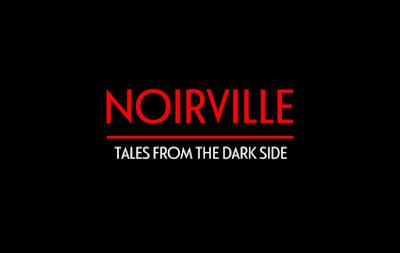 There were six of us that Chris McVeigh, publisher of Fahrenheit Press, got together. Six us of who were about to enter the dark and twisted world that McVeigh moves in. Either that or we're going to be judges of an anthology of short crime stories that he wanted to release, Noirville: Tales From The Darkside. Luckily, it was the latter.

What interested most about this project was that we would be reading these stories blind, the author's name unknown to the judges. So if the writer was a friend or someone huge like Lee Child or Lawrence Block, they weren't going to get special treatment. The words were what mattered. The final product played out well because of this. The only writer I knew of in the Noirville anthology was Sarah M. Chen. The rest were strangers and that was really cool to me.

Before I get too far into this thing, let me introduce the other judges. First was Jo Perry, a Los Angeles based writer of Dead is Better, Dead is Best and Dead is Good books, all published by Fahrenheit. There were several UK book reviewer and bloggers: Kate Moloney of Bibliophile Book Club, Gordon McGhie of Grab This Book, Janet Emson of Portobello Book Blog and Verity Wilde of Verity Reads Books. And then there was some Yank book reviewer named David Nemeth from Unlawful Acts. McVeigh could not be expected to get every decision right.

This project was started in August 2017 with a projected released date of Christmas that year. As McVeigh writes in the introduction of the March 2018 release, “So only 3 months late, I’m taking that as a win.” I got through the thirty-five stories assigned to me to in less than a month though I probably was the last one to send them in my ratings. My email to McVeigh went like this, “I hope this isn't too late, Bouchercon knocked me for a loop. I don't know if I was in a bad mood reading these or what.” Oh, I must have been in a pissy mood. We were told to assign values from one to six, one being awful, six being great. Of the 35 stories I was assigned to read, I gave over twenty stories a rating of 1 or 2. Only four stories got the highest rating of 6.

Two stories, I didn’t like made it into the book. Three of the four stories I gave the highest rating were published: “The Icing On The Cake” by Russell Day, “Justin’s Room” by Jen Delozier, and “Washed Up” by Paul Gadsby.

The second round took a lot more time. Thirty-five stories again. This time the rating system was 1 through 10; 1 being horrible, 10 being the opposite of horrible. For better or worse, I only gave ratings to the best stories I thought should be included. I didn’t rate the other stories which was kind of a bitch move by me. Apologies, Chris. Of the 11 I recommended, only 5 made it into the book.

Chris McVeigh should get all the kudos for giving up control of the book and putting into our hands. The anthology writers include S.E. Bailey, Sarah M. Chen, Patsy Collins, Russell Day, Jen Delozier, Paul Gadsby, Joe Guglielmelli, Chris Hyatt, Scott Miles, John Scheck, John Schreier, Alex Shaw, Jeff C. Stevenson, Marc Sorondo, and Glenda Young.
Even though the judges had differing opinions on what is good or not, none of us were swayed by the fact that we had a beer with the writer the night before. If you're interested in making the crime fiction more inclusive and less cliquey, then blind judging is something editors and publishers of anthologies should give some strong consideration to.  Yes, blind judging is more work, but it's free of the incest and weak work that plagues many anthologies.

Good news on the anthology--and agree with you here too. When I was guest editor for the Bouchercon anthology, we invited the conference headliners to submit a story (a nice gesture, I think) but blind submissions on the rest. It was an absolute thrill to see that two of my own favorite short story writers were among those who were picked blind (good friends, in fact!) but I had no idea they'd even submitted, much less that these were their stories. Talent does rise to the top. But even bigger thrill was having three writers get their very first mystery stories (first stories period in two cases) published alongside some veteran crime writers.

In short, I see what you mean.