I'll Be Gone In The Dark and why women are drawn to true crime...

I've been reading I'll Be Gone In The Dark, by Michelle McNamara and the way she seamlessly blends her own personal experiences and relationship with true crime into the narrative of the Golden State Killer has brought up a lot of thoughts and feelings on my own relationship with true crime. We know, and have discussed on this very blog, how many of the consumers of true crime entertainment are women (almost all of them), and this book seems to touch on the reason I hear from true crime aficionados a lot. 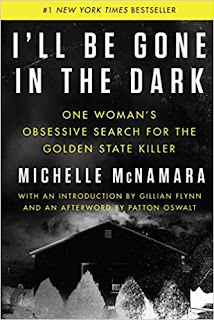 We're scared to death. McNamara's introduction to true crime was an unsolved murder in her own town. I've written here about the spate of high profile, terrifying crimes that happened in my home town. Even the podcast, My Favorite Murder features the two hosts repeating how much they don't want to get murdered, how their fascination with these violent and upsetting stories seemed to come after a genuine fear.

While it's incredibly unlikely, in a statistical sense, that I will be targeted by a serial killer or stranger who wants to invade my home to rape me - the truth is even scarier. Most murder victims are killed by people they know. Most women victims are murdered by men they once loved. If that hadn't been hammered home for me in my late teens, watching the parents of Laci Peterson love and support their son in law for weeks before realizing that he murdered their pregnant daughter, the statistics don't lie.

The reason women are the demographic for Lifetime (which has become Murdertime in the years since it was all  Hallmark style romances) and ID Discovery isn't because of some dark side we're hiding - but because we've been raised to believe that these fates await us around every corner. Sadly, it's not fully inaccurate. RAINN says one in six women will be the victim of a rape or attempted rape in their lifetime, and most will happen before they turn thirty years old. So many of the high profile murders that capture the interest of the true crime community involve sexual abuse, or at least, sex. To refer back to Scott Peterson, his motive seemed to be that he was tired of his current wife, and wanted a relationship with the younger woman he was having sex with.

When my straight/bi women friends and I talk about past relationships, each and every one of us has at least one story about a guy who seemed great until the relationship got serious. Suddenly, they were living with, or married to a controlling asshole who tried to tear them down, isolate them, and/or ruin them financially. Live Your Dream states that well over four million women experience intimate partner abuse every year.

So while a well written book like McNamara's would be interesting, if not entertaining without the personal touches she included, the fact that she writes about the effect true crime in general, and this case specifically had on her is amazing. It's time to put a finger on it - a lot of true crime entertainment is considered trashy, or on the same level as soap operas. While I have my own set of criticisms for the genre, I think it's beyond time that we start talking about why women are so drawn to it. No one will look down their nose at a person who reads and researches about health issues that run in their family, so why are we side eyeing women who want to know more about the women, often women just like them, that suffered the fate we're always a little afraid of, even when we're not really thinking about it, somewhere in the back of our minds?
Posted by Renee Asher Pickup at 11:16 AM

Outstanding post, Renee. I have wondered about this for years and never received a truly satisfying answer. What you said here about true crime makes perfect sense.