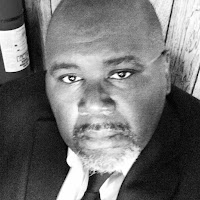 I met S.A., Shawn to pals,at the very first Noir at the Bar in Richmond. He quickly became a regular and a favorite among Richmond readers. Shawn further committed to the community by organizing and hosting for Richmond's N@B.

Shawn's known for his brutal short fiction, having published tales with respected magazines such as Thuglit, Yellowmama, Hardboiled Wonderland, and The Phoenix Quill. His work can also be found in several anthologies; Steam and Steel: Thirteen Riveting Tales: A Steampunk Anthology, Fast Women and Neon Lights, and Sound and The Fury: Shakespeare Goes Punk.

One of my favorite S.A. Cosby shorts is Slit the Belly, a tale of heartbreak and revenge. If you like crime-fiction with a noir twist you will love this piece, originally published with Crime Syndicate Magazine, Issue 3. For your enjoyment, scroll down to the bottom of this post, and read Slit the Belly.

The gritty urban-fantasy Brotherhood of the Blade, released in 2012 by Hatton Cross Publishing, was Shawn's first novel. His newest release, My Darkest Prayer, will be released in December of this year by Intrigue Publishing.

My Darkest Prayer tells the story of Nathan Waymaker, the hard-drinking, former deputy currently shuttling stiffs around for his cousin's funeral home. When a local minister is found dead, the man's congregation suspects foul play and asks Nathan to help with the investigation. What starts out as an easy payday for Nathan soon morphs into a maelstrom of sex, lies, and murder. He finds himself in the depths of small-town corruption, struggling to stay alive and all the while trying to keep his own dark secret hidden. 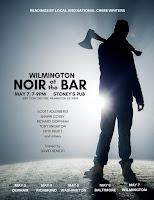 Always working, Shawn will be reading at the inaugural Wilmington, Delaware Noir at the Bar on May 7. This date is part of the second annual Noir at the Bar Crawl, where local and nationally published writers read at different locations up and down the east coast. Wilmington's date is hosted and organized by editor, reviewer, and blogger David Nemeth (Do Some Damage dude) and this event is shaping up to be very exciting. Scott Adlerberg (fellow Do Some Damager), Richard Goffman, Tony Knighton, and Eryk Pruitt will also be reading that night.


As Shawn gets closer to his publishing date and as he schedules new events we will keep you up to date. Hope you enjoyed this introduction to a very talented writer.


Keep up with Shawn and all of his writing news at his Facebook page S.A. Cosby author.

Slit the Belly
by S.A. Cosby


Tron banged on the old screen door so hard the whole house seemed to shake. Day-Day heard shuffling footsteps approach the door. He reflexively touched the butt of the Glock in his waistband rubbing against the small of his back. A robin whistled from a nearby magnolia tree. What sounded like a pretty good-sized dog barked in the distance.

An old man with skin as black as midnight in a mineshaft opened the door. “Can I help you boys?” he said.

“We looking for Trucky,” Tron said in a deep voice. It reminded Day-Day of Darth Vader.

“He ain't here. He went to the store but should be back presently. You fellas wanna come in and wait for him?” the old man asked.

“Yeah. We can do that,” Tron said. The old man smiled and walked back into his kitchen. Tron and Day-Day followed him. The old man sat down at circular metal table. Day-Day and Tron sat across from him. A steaming cup of coffee sat in front of the old man.

“I'm Alvin Lee, Trucky's grandfather,” the old man said, holding out his hand. “What they call you boys?”

Tron looked at the hand then back at the old man's face.

“I’m Tyrone and this is Duane,” Tron said. Legally that was true. Those were their given names. No one in the street would even flinch at those names. But tell them Tron and Day-Day were coming and homeboys suddenly found religion. Alvin pulled his hand back and took a sip of his coffee.

“Trucky got so many friends it's hard to keep track. They coming by all times of the day and night. He’s always had a lot of friends. I think it’s his way of dealing with his parents dying. My daughter and son-in-law was killed in a car accident. We took Trucky in after. Then his grandmother passed. Lost my little girl and my wife in the same year,“ Alvin said.

Alvin nodded as if he understood. Tron looked over the old man's shoulder at the rooster clock on the wall.

“How long Trucky been gone?” Tron said. Alvin answered his question with a question.

“How you boys know Trucky?”

Tron smirked. It looked like a snarl to Day-Day. “We just know him,” he said.

Alvin smiled. “I know how that is. I ain't so old I don't remember what it’s like to have running partners. Believe it or not I used to roll with some rough boys back in the day. Some real Nicky Barnes and Frank Lucas type of brothers.“

“For real?” Day-Day said. Tron shot him a look. Alvin nodded his head.

“Yes sir. And before me my daddy was a rum runner for a fella out of Franklin County. Carried moonshine up the Potomac to the juke joints. Trucky, though, he ain't about that kind of life. He always been nice, you know? He not cut out to slit no bellies,” Alvin said.

Alvin laughed. He laughed long and hard. The skin on Day-Day's neck pimpled with gooseflesh.

“My daddy told me if things got out of hand on the boat or one of them northerners come up short sometimes you had to dump them overboard. But you slit they belly first and poke holes in they lungs so they don't float back to the surface.” Alvin smiled again.

“What Truckey go to the store for?” Tron said.

“He said he had to get some things,” Alvin said after a moment.

Day-Day sighed. It was about to go down. He was actually sort of enjoying the old man's stories.

Alvin sipped his coffee and set it down, then put his hands flat on the table.

“Ya know when he told me you boys was coming I thought ya'll would be some real hard rocks. But ya'll just some wanna be gangsters. Baby shit soft,” Alvin said.

Tron cocked his head to the side and stared at the old man.

No one said anything for a few moments. Day-Day could hear the clock on the wall ticking in the silence. He decided fuck it, reached for his Glock.

Alvin's hand went under the table.

A muzzle flash lit up the underside of the table like a fireworks display. Day-Day felt something hot punch him in the guts. He slid out of his chair and onto the floor, blood pouring down his thighs and soaking into his jeans. Tron shoved himself backwards from the table as Alvin stood up holding a sawed-off shotgun, pumped the action and fired a second round into Tron’s face, which evaporated as his body collapsed to the floor. A thin ribbon of smoke unfurled from the shortened barrel as Alvin walked around the table and casually aimed it at Day-Day's head.

“Me? I ain't got no heart,” Alvin continued. “I did twelve years in Mecklenburg. My heart is gone. And now my grandson gone, too. He was so scared of you boys he hung himself this morning in the shed out back.“

Alvin pumped the action on the shotgun and expelled a still smoking shell. It clattered to the floor by Day-Day’s head with a dry, hollow sound. Day-Day heard someone gurgling and realized it was him.

Alvin smiled once more. “Lucky for me there's an old outhouse in the woods, so ain't gonna have to slit either of you open, just throw you down the shit hole where you belong.” He pulled the trigger. Just before the pellets entered his brain Day Day tried to speak. He tried to say he was sorry. But the only thing that came out of his mouth was blood.