After The Walking Dead returned in 2018, I watched only one episode live–I had to see his death, a death I dreamed of since season two. The last couple of seasons, I watched TWD and hated myself for it. I wasn't enjoying the show and felt I wasted an hour every Sunday night. I found out Eryk Pruitt was a fan of TWD and disappointed as well, I wanted to give him a chance to write about why TWD failed so many fans.  He agreed to give it a shot. Pruitt is a writer, filmmaker, and podcaster. He is the author of What We Reckon, Hashtag, and Dirtbags. His true crime podcast, The Long Dance, will be out shortly and I wrote about it here at Do Some Damage. Can crime fiction writers and readers learn anything from the mistakes of The Walking Dead? – David Nemeth 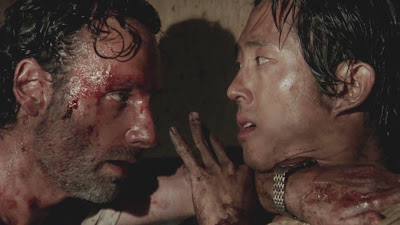 1. Always aim for the head.
2. To achieve peace, war is necessary.
3. The zombie disease is inside us and it has been the entire time.
4. Do not jack with your audience's trust in the narrative.

That fourth lesson is the stinger, man. It's the one that has left the mark.

The Walking Dead has been one of my favorite TV shows and it's based on one of my favorite comic books and has based an entire universe around one of my favorite topics: the zombie apocalypse. I was excited from the moment the show was first announced and, after a choppy first season, I can remember hoping against all hope that the show wouldn't suck. After the first half of the second season started slowly (at Hershel's farm) I reckoned the show certain for cancelation due to bad pacing, but by the midseason finale, I was hooked, man. Hooked.

When Sophie walked out of that barn, it was the payoff that we didn't know we were due. That little surprise was more than a narrative gimmick, it was proof that the writers in that room knew what they were doing, and we could trust them with our attention for one hour per week. Since that moment, I watched each episode, each narrative arc, each season knowing that the grown-ups were flying the plane. There was no reason to doubt them; they knew what they were doing.

This had paid off in spades. That trip to Terminus which lasted nearly an entire season culminated in FOUR OF THE MOST INTENSE MOMENTS IN TV HISTORY. They made bold choices (Carol kills a child, dude) and stood by them. They experimented with pacing, structure, and introduced or killed off characters with abandon. However, their audience—although tested at times—knew we were in good hands.

We trusted the writers.

And then Glenn fell off that dumpster…

Somewhere along the way, the showrunner at TWD started cashing checks. Maybe the inflated cast meant less money for the writers. Maybe folks thought their audience would follow them through anything. Maybe Scott M. Gimple found compromising photographs of TWD creator Robert Kirkman or Greg Nicotero and leveraged this blackmail so that he could singlehandedly ruin an innovative franchise. I'll never know the ins and outs of the wanton destruction of this superb example of prestige television, so instead of giving you the cause, I shall instead focus on the effect:

They jacked with our trust in the narrative.

Seriously, if offered the opportunity to go back in time and stop either Donald Trump or Scott Gimple, I would need a minute to think things over.

Instead of the TWD's narrative being led by characters (actual characters), it became led by plot points. Instead of dialogue, the show relied more on special effects. Their approach to storytelling became cheapened and they stopped being the kind of show that took risks.

For example, the war with Negan basically pits two large groups of extras against each other. Remember the days when we became invested in characters and felt the pain when those characters were killed? Now, we don't know any of the casualties of this war, so who cares? And even if we did care about the character, IT COULD BE ANOTHER GLENN BENEATH THE DUMPSTER!!!
I can't help but think that the TWD writing staff of Seasons 2-5 would have given us a half-season from the Savior's POV which would A) allow us to care about these "extras" who are just cannon fodder and B)  allow us to question the morality of our protagonists (Rick's group), instead of endless conversations about should we kill them/let them go. But instead, we have the death of Coral to drive home that point.

Whether you like TWD or not, you can learn from their mistakes. I am lucky to have earned whatever audience I have, and would never willingly do anything to jack with their trust.

I only wish The Walking Dead would have done the same.

LITTLE DISCLAIMER: This last half-season has actually been getting better. Does this coincide in any way with the "firing" of Scott M. Gimple? I have no idea, but it's a start.  You know where to find me on Sunday nights.

Eryk, I completely agree...I don't even watch on Sunday anymore. I DVR, and when there are no other shows left for that week and I'm too lazy to switch to Netflix, I watch TWD. Mostly, I'm now in it for the Negan resolution and to see if they have the balls and creativity to end the show, and end it right.

I had much the same reaction as you did to Glenn and the dumpster, even blogging about it at the time. http://frankzafiro.blogspot.com/2015/11/spoileralert-there-arenumerous-spoilers.html

Glad to know others felt the same way.

Great assessment of what has happened to a tremendous show, and it only reinforces why the magic number for TV seasons if the show wants to remain great seems to hover around five.

Frank,
If they had quit at Season Five, I (and the rest of the world) would have been furious, but they would have gone out on top.
But most of all I can't help but look at seasons 6-8 and think of all the missed opportunities they had.
Great post on your site, BTW. Thanks

We've actually stopped watching. We will wait for the season to drop on Netflix now. Carl's death was so unnecessarily prolonged. Yes, the kid I would have been happy to see die several seasons ago had his moment and I felt the loss more than I'd thought possible but watching people react to news isn't story. It's just emotional manipulation. I'm reminded of all the great West Wing episodes that ended with someone about to walk into a room and reveal something. They rarely showed those scenes because that often doesn't add to the story.


The Walking Dead became about milking it for a buck and manipulating the audience. It's been a long time since we had an episode like The Grove. Entertaining as hell characters like Simon take a back seat to characters that just aren't working, like Negan, and it leaves us with little to hold on to. Since we only stream this was a show we bought episodes of on Prime weekly. And we quit 2 weeks ago. When Hap and Leonard is killing it and The Americans is due back next week we have more to watch than we have time for. We stuck it out for a long time. Let's hope Fear continues to deliver.

"Seriously, if offered the opportunity to go back in time and stop either Donald Trump or Scott Gimple, I would need a minute to think things over."