Several months ago, when my brother was staying with me, we both got excited about the Psych movie, and realized there was nowhere to stream the series without paying through the nose. I then realized I missed the end of the series somehow, and felt a little crushed.

The day after Christmas I was at my brother's apartment and Psych was on. While I waited for him to get ready to leave I sank into the couch and the familiar antics of Shawn and Gus before realizing, I shouldn't be able to do this.

No, it was streaming. 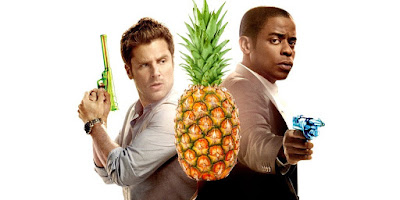 It's sometimes hard to remember what it was like when, if you missed an episode of a show you liked, you just missed it unless you were lucky enough to catch a rerun in the off season. Where, if you missed the ending of a series you really loved, that opportunity was simply gone, but I had been living that reality for years.

Needless to say, I started watching Psych from the beginning. It's fun and silly, and my kid can watch it, so it's on a lot. Folding laundry = watching Psych. Cleaning the living room = watching Psych. Want something to watch over lunch? Watch Psych!  Plus, we recently bought a used elliptical and it's positioned perfectly to get a nice workout while I, you guessed it, watch Psych.

It's hard to pinpoint one or two things that make the show so fun, aside from the fact that it makes Santa Barbara look like a murder capital, which always gives me a smile. But as we've gotten into later seasons, I've remembered one of the most special things about the show - the women.

At the start of the series, the chief is a sleep deprived mom of a newborn, who is still in control and manages to stand up for herself and move from "interim chief" to running the place. She's always no nonsense, she's always in control, and she never falls victim to shitty tropes about women in power. When we see flashbacks to Shawn's childhood, we see his dad doing most of the child rearing, and discover that his mother was a highly successful psychologist who travels the country to do her job. Juliet, who starts out as a new detective, never runs from danger, even when dealing with serious trauma. She holds her own with her hyper-masculine (but still respectful) partner. Even the romantic storylines present positive views of women and their agency.


The show centers on Shawn and Gus, but the supporting cast is full of women in many different situations and personalities - and though many murder of the week shows depend on dead women to prop their stories up, it actually seems like there's a good mix of male and female victims.

I commented the other day that the show was ahead of it's time with Gus's character, who openly speaks about race issues and history without people rolling their eyes or labeling him a problem. But it goes further than that, when the men are creepy to women, the other men call them out. When Shawn gives dating advice he starts with "Treat her like a person first."

And, in the episode we watched last night, when Juliet is shaken and having a hard time dealing with another run in with the show's repeat villain, Shawn does the manly thing and tells her he will protect her. She relaxes, like it was exactly what she needed to hear, and says, "And I will protect you right back."

It's a touching moment, but it's also an amazing one. Shawn's character is routinely threatened by anyone and everyone who is better than him at anything, but when it comes to the woman he loves, he is comfortable and happy knowing that she's a badass police detective. Knowing that they have to protect each other and face the world together - and that's pretty amazing.

It's fun to revisit something I loved and see that not only does it still hold up, but that it's doing better on issues like race and gender than a lot of what's coming out now. While laughing at the antics of Shawn and Gus I remarked, "I wish they were real..." and while they might be less fun in life than on TV, I do hope we see more healthy, affectionate friendships between men on television. I hope we see more dads as the primary caretakers of children. I hope we see more women in positions of power that aren't drawn as ball busters or failures. And I really hope we see more relationships where the expectations of gender are thrown out in favor for mutual respect and protection from this insane world.