Night of the Flood, a Novel in Stories. 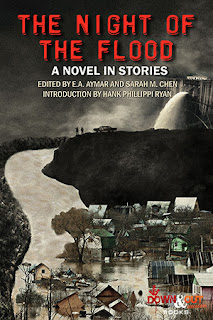 Fourteen of the edgiest contemporary-crime writers want to take you to the fictional town of Everton, where things are about to get dangerous.

THE NIGHT OF THE FLOOD takes place the evening Maggie Wilbourne is to be executed, the first woman put to death by the state of Pennsylvania in modern times. On this night a group of women rise-up to protest Maggie's controversial imprisonment and impending execution. In a rage, the women blow up the local dam, flood their small town and set off a hellish night of crime and chaos.

The stories featured in this brilliant collection shine a light on the tensions between the rich and the poor, the insider and the outsider, the innocent and the guilty. Whether it’s a store owner grimly protecting his property from looters, an opportunistic servant who sees her time to strike, or two misguided youths taking their anger out against any available victim, THE NIGHT OF THE FLOOD is an intricate and intimate examination of the moment when chaos is released—in both society and the human spirit.

This highly anticipated collection is co-edited by E.A. Aymar and Sarah M. Chen, both of whom also contribute a story.

Ed is the author of I'LL SLEEP WHEN YOU'RE DEAD (2013) and YOU'RE AS GOOD AS DEAD (2015), both from Black Opal Books. He also writes a monthly column for the Washington Independent Review of Books, and is the Managing Editor of The Thrill Begins (for the International Thriller Writers.)

"My story, The Orphans," kicks off the collection and the characters were originally for another group project, but the other writers flaked." Ed mutters something about Tom Sweterlitsch and Liz Heiter then, thankfully, continues. "But something about those two lost, violent siblings stuck with me, and I'd always wanted to revisit them. THE NIGHT OF THE FLOOD gave me the opportunity to do so. Putting those two desperate characters in a drowning town made sense physically and metaphorically. It's nice to see them finally breathe, even as they struggle to do so."

Co-editor Sarah M. Chen is a rising star in crime-fiction. Her debut novel, CLEANING UP FINN, is a Lefty and Anthony finalist and IPPY award winner. Sarah's short stories have been accepted for publication by All Due Respect, Akashic, Shotgun Honey, Crime Factory, Out of the Gutter, Dead Guns Press and Betty Fedora.

"A trucker hell-bent on making her delivery in time detours through Everton. An eye doctor stands guard outside his clinic with his sociopath buddy. It's a night of chaos, retribution, and second chances," Sarah Chen says of TNOTF.

Jennifer Hillier, author of the successful novels CREEP, FREAK, THE BUTCHER and WONDERLAND, ties this collection together with a dark and intriguing tale. Jennifer, whose latest book JAR OF HEARTS will be available June 12, 2018, is known for her wicked way with words, so this promises to be a tremendous read.

Down and Out Books

THE NIGHT OF THE FLOOD will be available March 5, 2018. You can pre-order your copy today.

Posted by Marietta Miles at 8:24 AM