My Weekend with Sue Grafton

I've said before that one of things I love about attending writing conferences and author events is that it gives me the opportunity to meet my writing heroes, or, as I like to call them, my rock stars. For me, there was no bigger rock star than Sue Grafton.

I didn't discover her books until I was in my 30s, but once I did, I devoured the lot of them (or, what had been published up to that point), one after another, over the course of a few months. Sue, along with David Liss and Lawrence Block, re-fueled my desire to write a novel and inspired me to set my sights on crime fiction. I owe them all a lot, but none so much as Sue.

I've been sitting here for the last couple of hours, writing, deleting, writing, deleting, trying to express how I felt about her and why. Everything I've written is long-winded and overly personal, not very interesting to anybody but me. Let me try again.

In 2009, when I was but a wee writer hoping to someday be published, I met Sue for the first time at the Shamus Awards banquet at Bouchercon in Indianapolis. I didn't know she'd be attending and when she walked into the restaurant with her husband, Steve, I was breathless with excitement. 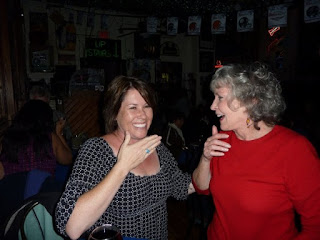 Some of you might be familiar with Ali Karim, who seems to know everyone in the crime fiction community. He was at the banquet himself, and I told him how thrilled I was that Sue was there. He said, "Would you like to meet her?"

Before I could respond with anything resembling coherency, Ali left and returned with Sue. He introduced us and I took gushing to a new level as I told her how much I loved her books. I might've also cried a little. After I composed myself, we spent the next ten or so minutes in conversation, during which she asked all about me and what I was working on, and gave me a little insight into her own work process.

She was a delight.

About a month after Bouchercon, I attended a second conference, the Crime Bake in Massachusetts. Sue was to be the Guest of Honor and I'd signed up for both cons without knowing I'd have the unexpected pleasure of meeting her at Bouchercon. Going into Crime Bake, I had little expectation she'd remember me, but I looked forward to seeing her again, nonetheless.

My husband and I were sitting in the bar when she arrived with a couple of the conference organizers. As the three of them passed our table I said hello to her and reminded her of our meeting the previous month. She surprised me by asking, very shyly, "Can I sit with you?"

We ordered a round of drinks and Sue asked for a glass of Chardonnay. I don't remember if she specified a brand, but when it came, she didn't like the taste and requested the wine menu before ordering something better. My husband ended up drinking the first glass.

We still laugh about that--my husband drinking Sue's cast-off wine. Sue wasn't at all rude about it and the situation wasn't awkward--she just wasn't going to drink a glass of shitty wine just to be polite. I have to respect her for that.

Afterward we sat there, drinking and talking, like two people who'd known each other forever. I mentioned a scene in one of her books that took place near where we lived in Santa Monica and she told me about meeting her husband while living near University High School in West Los Angeles. We dished about old boyfriends. I told her I didn't think it was realistic that her famed protagonist, Kinsey Millhone, cut her hair with nail scissors. Sue insisted it was because she used to do it herself.

We might've talked about writing--funny, I don't remember that.

Many of the tributes to Sue I've read mention how sweet she was. How gracious, and how generous she was with her time. And she was all those things. But she also had an edge. She was sassy, the kind of person you might get busted with for smoking cigarettes in the girls room. She was fun and flirty and beautiful.

The next day, Saturday, was busy with conference stuff for both of us. But later that evening I met her as she exited the elevator. She'd dressed up somewhat for that night's dinner and I told her how pretty she looked, complimenting her scarf. She'd knitted it herself from cashmere and said it was about as big a knitting project as she had patience for. When I got closer I saw she had something on her face and without thinking, I brushed it off her cheek. It was such an intimate gesture and yet, at the time, there seemed nothing weird about it.

Jesus. I sound like a creepy stalker now, don't I?

She asked again if she could sit with us, so I brought her over to our table in the bar. I'd been sitting with a couple of other attendees and Sue chatted with all of us until one of the conference organizers approached her and told her she was supposed to be having cocktails with another group. She refused to leave our table. She wanted to hang out with us. With me. And, funny enough, with my husband. She liked him more than she did me, I think. 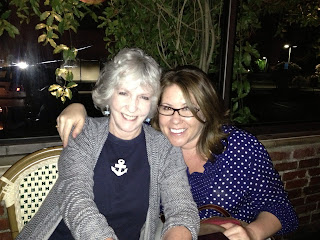 Over the years, I saw her a few more times. She always remembered me, but we never had another conversation like the ones we had that weekend. I wrote about one of our subsequent encounters here, when I attended my first conference as a published writer:

"After my Left Coast Crime panel, I dutifully went downstairs with the other authors to sit at the signing tables. The first thing I saw when I got there was that Sue Grafton, who'd had a panel during the same time I did, was at one end of the table and I was at the other end. We were "bookends," if you will. This moment was not lost on me. In all the fantasies I'd ever had about being a published author, this had not been one of them--it had never even occurred to me. I was thrilled.

I waited until Sue's long line of fans had dissipated and took the opportunity to tell her just what it meant to me. My first conference as a published author and here I was sitting at the signing table with my idol. Always a gracious one, she gave me a big hug and congratulated me.

I spend a lot of time complaining about how hard writing is but let me tell you--there are a lot of great moments along the path to publishing. This was one of mine."

It felt like gut-punch when I got the email from Elizabeth Little, then president of the Southern California chapter of the Mystery Writers of America and the chapter to which Sue belonged. It was December 29 and I'd been putting the finishing touches on the SoCalMWA newsletter (I've edited it for the past several years) and hadn't been online for a few hours. The subject line told me everything I didn't want to know: Sad News--Sue Grafton.

I said at the beginning of this post that I'd deleted the earlier versions because they were too long-winded, only to write an even longer one before hitting "publish." And damned if it isn't pretty darned personal and might not be of interest to anybody but me. The truth is that Sue's death has hit me harder than I could've ever imagined and if I can't be honest with you all, who else can I be honest with?

But along with my sadness, I feel gratitude. Gratitude to Sue for giving us Kinsey Milhone and a game-changing series of books that will forever impact the mystery genre. Gratitude for her dedication to the crime fiction community, her unfailing graciousness, her wry humor, and her willingness to share the tricks of the trade she’d mastered so well. And finally, gratitude for the personal exchanges I had with her. They are among my most treasured memories in my writing career.

I think I shall.

I'll always have that weekend at Crime Bake.
Posted by Holly West at 3:00 AM

Beautiful, Holly. Thank you for sharing this...and no, *you're* crying. (Happy tears, though, because we had such a wonderful person in our midst and she’s left us so very much.)

This is such a moving tribute. She had an impact on so many, and I have read multiple stories of her kindness to others.

Thanks for telling this story. I met Sue once, W and was so over excited I could hardly speak, and i e met many authors. Beautiful story.

Maybe! If you're curious, she ended up ordering Kendall Jackson Reserve. :-)

The Value of a State-of-the-Business Examination

by Scott D. Parker It all started with a question and it ended up with a complete evaluation of my writing and publishing life. One of my lo...