Say It Ain't So, Joe (and Frank Hardy)

When reading interviews with a crime fiction writers and the questions lead to childhood influences, we inevitably hear about the Hardy Boys or Nancy Drew. So I got this idea to begin reading the Hardy Boys series from book one, The Tower Treasure, to fifty-eighth entry, The Sting of the Scorpion, and review one per week over a year. I'd call it, "Fridays With the Hardy Boys" or something equally as trite.

But then I read The Tower Treasure and oh my god was it horrible.


By the time the Hardy boys and Chet had raced from the Mortons’ kitchen, the prowler was not in sight. Thinking he had run across one of the fields, the three pursuers scattered in various directions to search. Joe struck out straight ahead and pressed his ear to the ground to listen for receding footsteps. He could hear none. Presently the three boys met once more to discuss their failure to catch up to the man, and to question why he had been there.

Seriously? Pressed his ear to the ground to listen for receding footsteps? I can't believe this used to be a thing. 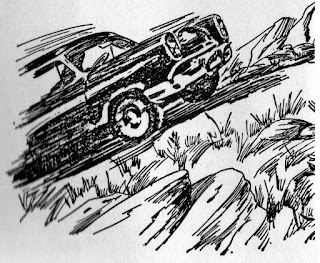 If you thought the parents in Stranger Things were no-shows and uninvolved than you haven't met Mr. and Mrs. Fenton Hardy. Maybe I'm too used to the helicopter parents of today, but even though their father was involved in the periphery of the case, the Hardy Boys' parents seemed way too hands-offish even when their boys were investigating a stolen car and a robbery. The Tower Treasure opened with this sentence, "Frank and Joe Hardy clutched the grips of their motorcycles and stared in horror at the oncoming car. It was careening from side to side on the narrow road." The opening of the book, the Hardy Boys almost died and it took until Chapter XI for their father to step in and send the boys home. In the Hardy Boys' second adventure, The House on the Cliff, their father hires them to spy on drug smugglers. That's some major-level Department of Children Services shit right there.

There is so much bad storytelling in this book, from Joe toppling over a railing and grabbing two spindles one-floor below to the boys tricking their father's competition into putting out a fire in a trash bin and missing his plane, I found myself groaning as I read. Trust me on this, the Hardy Boys are bad, really bad. If you don't believe me, then how about my sister? 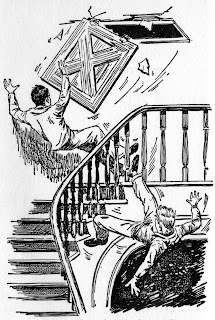 Unknown to me at the time, she was reading the Hardy Boys to her son and she was asking me for some recommendations of other mysteries to read for her eleven-year-old. She texted, "Not the Hardy Boys. Been there and done 15 of those. They are pretty bad."

If I hadn't re-read The Tower Treasure I would have been surprised, but I had and I understood.

After thinking for a few hours, I recommended Agatha Christie's Murder on the Orient Express because I figured they could see the movie afterward. A few days later my sister texted me, "Great idea. Brady is loving it!". I am pleased to say mom and son are now on their second Christie book, this time And Then There Were None.

Hopefully, the next generation of crime writers will not be influenced by the Hardy Boys, instead, they'll have the accomplished hands of J.K. Rowling world guiding them. And we will all be better off for it.
Posted by David Nemeth at 3:00 AM

I think I only read one Hardy Boys book when I was a kid and then never another one. However, I read as many Nancy Drews as I could find. When I mentioned this to Margaret Maron, she said that's because the Nancy Drew novels were better written. That may be true, but rereading--and, I'll stress, teaching them--today, there's indeed a lot of wooden prose and far-fetched plot twists. But what's fascinating is the glimpse of an era's values, a publisher's savvy, and an icon that still has resonance. So basically I end up teaching ABOUT Nancy Drew as much as Nancy Drew the books themselves. Havne't tried reading one to our son, but.... we'll see how it goes if I do.

I read some of these when I was a kid, but early on recognized these guys weren't like anyone I knew. They had cars, motorcycles, speedboats, and went on vacations skiing, and to the islands.

Having this kind of money makes characters difficult to take seriously.

All of this is true, but let's not forget these were written for kids, and kids not nearly as sophisticated as kids are today. They're also written for the kids to be able to read themselves and keep track of everything. What they did was show a lot of kids (me, for example) that reading was fun, and that there was a world beyond what we had exposure to pre-cable and pre-Internet.

And if I catch any adult who waits with bated breath for the next superhero flick to come out say anything derogatory about The Hardy Boys, he'd better be prepared to throw down.

I read the Hardy Boys when I was a youth and enjoyed them. They are pure pulp fun and probably not meant to stand up to adult scrutiny. But I really enjoyed The Three Investigators. They were more modern. I even fashioned a hideout similar to theirs. I think all these series were to give kids a sense of their own power, a la Peanuts.

THE HARDY BOYS books were great for children, when they were written.
They were a product of their time, for their time.
This is like saying horses are an inefficient means of transport in the 21st century.