TORONTO – It’s been a week since I got back from Bouchercon, and I think I’m mostly recovered. It’s a four-day stretch of constant action, and it’s one of the absolute highlights of my year. It’s the World Mystery Convention, and it draws both writers and fans of crime fiction from all over the globe. This year, it was held in Toronto, Canada, a fabulous city I’d never visited before. 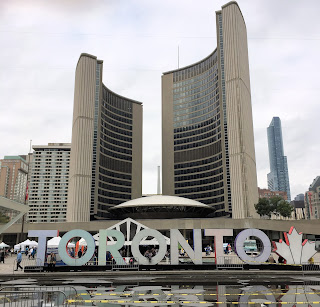 I took the light rail train from the airport to downtown (which was an easy ride of 25 minutes) and ended up in Union Station, which was a pretty spectacular welcome to the city.
On the map it looked like a short walk to the hotel, but with pouring rain and gusty wind, it turned out to be a bit more of a trek than I wanted after a transcontinental flight. I finally made it and turned in early.
Thursday morning, I volunteered at the registration desk, handing out packets and tote bags stuffed with books (yay!) to attendees. Then I spent time catching up with people. Just walking through the halls takes forever, in a very good way, because there are friendly faces everywhere and plenty to talk about.
I went to dinner Thursday night with three good friends – Judy Clemens, Kristopher Zgorski and Michael Mueller. We’ve made this a conference tradition, and it’s so much fun every time. Judy had gone on a ghost tour of Toronto the evening before, and the group saw a supposedly haunted old courthouse that’s now an Italian restaurant. When Judy said the building’s jail cells were still there and incorporated into current use, we knew we that’s where we had to eat.
The building was beautiful, and the jail cells turned out to house wine cellars and the bathrooms. And the hazelnut gelato was to die for.
Friday morning, I spoke on a panel about writing your second novel. It was a great discussion and we had some fantastic questions from the audience about continuing the development of your characters throughout a series. Afterword I got to do one of the things I was most looking forward to - have coffee with my dear friend Dotty Morefield. 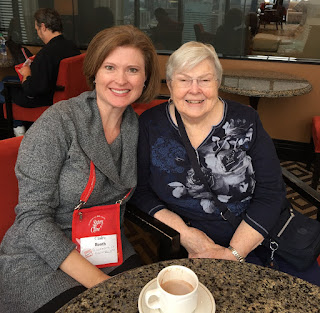 We had a wonderful chat with a few other friends at the top of the hotel. The company was great and the view wasn't bad either. 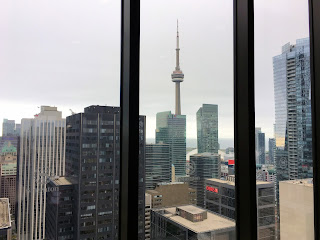 Friday night, I had another wonderful dinner, again with Judy Clemens, and also new friend Jess Montgomery.  We had a charming waiter with a French accent, ate great food and laughed a ton - what could be better than that?
I did get the chance to attend a few panels throughout the weekend. One of my favorites was the Young Adult panel. Every year, Bouchercon hands out a prestigious award called the Anthony. There are several different categories and this year two of my good friends, JC Lane and Owen Matthews, were nominated for Best Young Adult Novel.
Another of my favorites was a panel on having your books turned into television or film. I was excited to see Ann Cleeves, whose Jimmy Perez books/Shetland TV series I absolutely adore. Also on the panel was Maureen Jennings, whose Murdoch Mysteries is hugely popular in Canada. And it was fascinating to listen to David Morrell, whose experience in selling his books for TV and film is unparalleled. Did you know that it took 10 years from the time he optioned Rambo for it to make it to the screen? And at different points, it had actors like Paul Newman floated as possibilities for various roles? See – fascinating!
Friday night, I participated in the Pub Quiz event, which pitted groups of twelve against one another in crime fiction trivia. Purely by luck, our table had very diverse expertise and we ended up winning. As a prize, we got a big bag of books and goodies to divide amongst ourselves. Teammate Nikki Bonanni turned out to be as big a Louise Penny fan as I am. We both nabbed the Three Pines mugs. 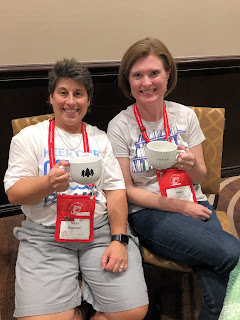 Louise was definitely the biggest draw at the convention, and with good reason. Her Chief Inspector Gamache books, set in the fictional Quebec village of Three Pines, are beloved around the world.
I also manned the Bouchercon 2020 information table. (Not included – boring photos of me sitting at a table.) That year, it will be held in Sacramento, and I’m on the local organizing committee. This actually turned out to be tons of fun. I ended up having great conversations with many people, even if they’d originally approached only because they needed directions to the hotel coffee shop.
On Sunday afternoon, I loaded myself onto a plane for home - tired, happy and with 20 pounds of new books in my carry on. I can't wait until next year.

It was great to meet you. And thanks for being part of the great crew that volunteered at Registration!

It was so wonderful to continue our tradition of having dinner together. All in all, a great convention. See you in St. Pete's (if not before at Malice)