I thought we all agreed...

I started my first novel when I was fifteen. I was frustrated with a lot of things, and had run ins with skinheads around my local punk club, and started a story about a woman who's life was ruined by Neo-Nazis.

I became obsessed with research. There was a time, over the twelve years I shelved that project and came back over and over again, I knew more about Nazis than anyone really needed to know. The one novel turned into two. I revisted both again and again over the years as my research became more in-depth and my anger grew.

Neither of those books will ever see the light of day. In part because a writer in their thirties cannot possibly go back and edit the things they wrote in their teens/early twenties and have it come out smooth and making sense, and in part because the moral of both stories was a little weak.

I thought that was ground that had been pretty well covered. A novel I read during those years, handled it fairly well (at least in my mind, at the time. I haven't revisited it). 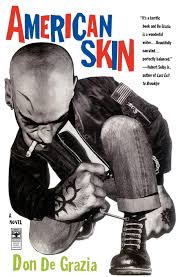 Don De Grazia's novel, American Skin covered how easy it was for frustrated white people to turn to hate, and how hard it was to turn away. And it covered the moral of the story: Nazis are bad.

So did Indiana Jones, Marvel Comics, American History X, and a hundred other pop culture items. All my friends agreed. Jesus, Nazis are bad, right? Fuck yeah, they're really bad!

The state where I live has more hate groups than any other state. I lived right in the middle of the Confederate Seat (on Fort Lee, right outside of Richmond, VA). I ran into the occasional skinhead. Once, a skin in Richmond saw me in the history section picking up research for the above-mentioned projects and attempted to recruit me. His father saw us and joined in. They were massive Confederate Skins with their own press. This was clearly something they liked to do. If they saw someone in a bookstore looking at Confederate or Nazi history, they would come and tell that person all about how biased the books were (the books leaned on, Gee, aren't Nazis fucking bad?).

They were both huge men, and I was alone in the bookstore, my friends somewhere else in the mall. So I made an excuse, left my books on the shelf and left.

I tell you that to tell you this: I've always known we had Nazis in the US. I knew about the Bund in World War 2. I knew about Neo-Nazis. I knew they were out and about and open with their hatred.

But my assumption, when it came time to shelve the novels and move on, was  that everyone aside from them just knew inherently that Nazis are bad.

I've heard a lot of people, especially those in marginalized groups, talk about how frustrating it is to see people surprised that these hate mongering assholes exist, or that they exist in such numbers. I share that frustration. We've been talking about this for years. Decades. For awhile, it was in vogue to talk about it. There were 20/20 specials and movies with Ed Norton. The general populace was engaged with the idea that neo-Nazis, the White Christian Identity Movement, the KKK (smaller, but not insignificant) existed, were a threat, and were bad. But like most social issues that come into focus in the mainstream, the world moved on. It became about terrorism and school shootings and the general public forgot about Nazis. When they forgot about them, I guess they thought all the Nazis had disappeared.

Of course, they hadn't.

Now they're doing exactly the things they talked about doing when I was reading their message boards in the early aughts. They cleaned up, got suits and fashy hair cuts (but not shaved heads!), separated their "intellectual" movement from the skinhead gangs, and weaseled their way into colleges, Men's Rights Groups, and all the places people didn't generally associate with Nazis. They played a huge role in the election. They march openly in the streets (looking like idiots in polo shirts with Tiki Torches, sure - but open).

And I see a lot of debate.

I woke up the morning after Richard Spencer's now infamous punch to the face and realized - I went to sleep thinking we all agreed that Nazis are bad, and woke up in a world where that's clearly untrue.

I spent so many years mired in the worst these assholes had to offer. Before Reddit. Before Identity Evorpa and The National Policy Institute. I saw the front page of a Neo-Nazi website turn to flash animation celebrating September 11th only an hour or so after I learned of the terror attack.

I thought I didn't have it in me to be ankle deep in that shit anymore. I thought if we could unite against anything it would be literal, flag waving Nazis.

Now it seems the choice isn't mine. They're in the streets, they're in the news. And even the "progressives" want to debate about how bad they are, how big their numbers are, whether we should respect them or not.

It's not fiction anymore. Of course, it wasn't when I was writing those doomed novels. But it wasn't like this. I still had the comfort of believing that the only people who didn't hate Nazis were flag waving Nazis.

Posted by Renee Asher Pickup at 11:21 AM