I’m not saying it cures diseases wholesale—that’d be naïve and a little Patch Adams-y. No, it’s all about that mental health. Sometimes a little laughter clears the gnarly gunk that builds up between all those brain folds.

I got back into writing thanks to Hurricane Sandy. You may have heard about the intense damage to Moonachie, NJ (a little background). That second town mentioned in the article? Little Ferry? That’s where I lived and still live. We were lucky enough to not be evacuated but we were flooded, lost both our cars, had to replace our heating, and I was treated to a severe bronchial infection that left me bed-ridden and with jacked up guts thanks to some STRONG antibiotics—seriously, I was a mess for a solid year.

Soon after things calmed down, the panic attacks happened. It’d be the dead of night, I couldn’t sleep and boom: heart palpitations, that adrenaline burst when you’re feeling trapped, a few moments of cold water panic talk—gibberish even.

I needed an outlet and apparently the planets aligned because soon after since I found myself reconnecting with a buddy who was making waves in his writing community. I read an excellent novella he put out and was inspired to write again.

And dude, I fucking wrote like a beast. I wrote because my brain depended on it. I workshopped and submitted. I actually put myself out there. At first, it was all the lofty shit I always wondered about—literary or genre tripe that was only cool in my head. The process was helping, but it wasn’t helping enough. The real change would come when I read another book and found out I could write with MY voice. That voice wasn’t lyrical or flowing. It was stilted, dark, and with a little bit of acid. I could be funny and still mean something.

I started getting published. Got nominated for a Derringer within a year. Got an agent within two (still working on getting a novel out, though, so I ain’t that amazing). At this time I’ve got nearly thirty pub credits to my name. I made handshake deals with folks to publish my insanity and garnered a reputation. There are people acknowledging that yes, this weirdo writes (next step: convince them that the writing is good, but hey!).

Still, there were bumps. All the while I was writing, I avoided something I needed to get off my back—Sandy.

But I didn’t want to write a treatise about trauma. I hadn’t gone through what a quarter of what some did. I didn’t have a kid shell-shocked to the point of hiding in his cubby on his first day back in daycare (one of my son’s friends) because he’d been evacuated by fucking jet ski before he and his family drowned in swamp/river water.

I felt weak. Who the fuck was I to act like my trauma was something to be addressed? Besides, I’m from The Bronx where we internalize and lash out at the worst possible time. That was working great for thirty-two fucking years, why stop then?

And then I read a stupid fake news story about black market semen.

I got to plotting a silly short story that grew into a silly novel that shrank back into a novella. I created a lead based on me that became a woman that became Fantine Park. The plot went from gonzo garbage to heist to anti-heist to the story of a father and daughter (conveniently as my daughter was on the way).

And then I found myself bringing Sandy into the mix.

Spoilers: the finale of NO HAPPY ENDINGS takes place in front of the Battery Park Tunnel as the worst of the storm came. There was a generator station that exploded near there that was visible from my house (I know this because I saw it). There was such flooding that cars were abandoned and left almost floating in brackish river water. This was an opportunity for me to take a lot of the internalized fears driving my issues and yank them out by the short hairs. I took that fear, those memories, and that helplessness and I put it all into a fucking sperm heist novel because fuck those fears and memories. Fuck that helplessness. It didn’t deserve gravity or emotional purity. That was already what it had.

That helplessness can go live in the absurd like it deserves to. The humor can hold the bad feelings and maybe kill them slowly. I can get a glimmer of hope, maybe even get an award nod that validates all this hard work—win or lose. 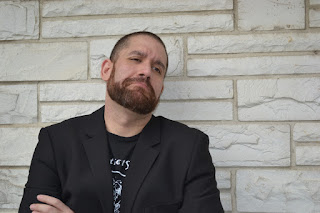 Angel Luis Colón is the Anthony and Derringer Award-nominated author of NO HAPPY ENDINGS, the BLACKY JAGUAR series of novellas, and the upcoming short story anthology; MEAT CITY ON FIRE (AND OTHER ASSORTED DEBACLES). His fiction has appeared in multiple web and print publications including Thuglit, Literary Orphans, and Great Jones Street. He’s repped by Peter Steinberg at Foundry Literary.