Things have been hectic in my household, and I've come down with a hardcore summer cold just as it's impossible to get through the day without kicking on the AC. What's there to do in the face of such adversity than sit down and read?

I've been trying to expand my horizons a little and read things I wouldn't normally read. I use the Scribd app, which makes listening to audiobooks and reading ebooks easy and relatively inexpensive. I sampled Liane Moriarty's The Husband's Secret after the show based on her novel, Big Little Lies blew me away (I mentioned this a couple weeks ago). When trying to find a way to describe it to my husband I landed on "Suburban Mom Noir." I enjoyed it, though admittedly it took me awhile to get in the groove compared to the more action packed stuff my fellow crime fiction writers are putting out, and some of the similarities to the mommy wars I see were chilling. At the center - a murder mystery unravels. It was a fun book, sometimes touching. 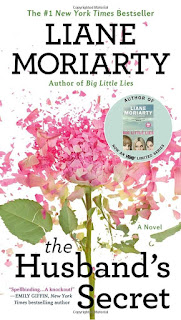 I moved on to The Hand That Feeds You by AJ Rich (Amy Hempel and Jill Clement writing together, which I didn't know when I started). This was a little closer to the average crime fare, littered with references to cool places in Brooklyn I've never been, and perhaps a culture I wouldn't enjoy. But the story was compelling, and I enjoyed making guesses at what was really going on as the protagonist unraveled the mystery of her now-dead fiancé and the several other women he'd been engaged to. I dictated the twists and turns to my brother, who despite not reading it as well, was shocked and interested in how things turned out. 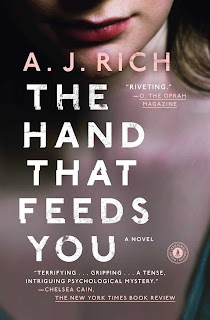 Right after that, I dove back into a book I had put aside a few months ago, The Luckiest Girl Alive by Jessica Knoll. This book would probably fall somewhere under "contemporary fiction" as the crimes that take place are the kind we don't revel in. Knoll's protagonist is a survivor of a horrific school shooting/bombing at the hands of a boy she considered a friend, intent on having the "perfect life" to make up for the horror she felt after being gang raped by the boys who were targeted, and the hatred cast on her when another survivor falsely accused her of being a part of the shooting. The book was tough to get into because the protagonist is quite hard to empathize with in the first few chapters, but as more and more of her story makes it on the page, it's an all too recognizable set of defense mechanisms. I quickly found myself on her side, hoping she would get what she needed, and realize what she wanted would only bring more harm. 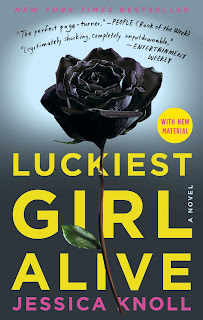 I like to branch out from time to time, and it helps keep the worries of accidental influence out of the way. I didn't even plan to focus my reading on women writers - just planned to take some chances on books I wouldn't normally pick for myself. I'm glad I did. I'm now listening to the audiobook of Sharp Objects by Gillian Flynn, which I already knew I'd enjoy, based on Gone Girl and Dark Places. After this stint, I plan to get back to all the wonderful and brutal crime fiction my friends and colleagues are putting out, but taking a short break has been fun as hell, and hopefully I won't wait as long next time.
Posted by Renee Asher Pickup at 3:20 PM

Email ThisBlogThis!Share to TwitterShare to FacebookShare to Pinterest
Labels: amy hempel, books, luckiest girl alive, the hand that feeds you