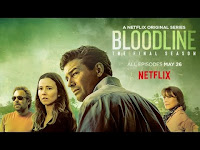 I crossed the finish line with Bloodline Season 3 last night. Perhaps that phrase will serve as a clue to what I thought of it.

This review contains spoilers so read no further if you don't want to know details.

Back in December, I watched Season 1 and raved about the series, especially Ben Mendelsohn's character, Danny. He was mesmerizing. He didn't survive to Season 2, having been murdered by his brother, John, played wonderfully by Kyle Chandler. Most of Season 2 was John and his two siblings (Kevin and Meg) and the constellation of characters around them try to come to terms with Danny's death and John trying to keep the law away. The finale of Season 2 also featured a murder and much of Season 3 was...wait for it...John trying to keep the law away from discovering *that* truth.

I'll be honest: there were certain stretches of Season 3 that were a slog. Well, not a slog, but just dull. I don't binge watch, so my wife and I watch an episode a night. Seven of the ten episodes in Season 3 typically ended with "Well, Kevin's being stupid, John's always looking like he's trying to contain his anger, lots of people are trying to talk to each other and leave voicemails like 'John, it's Kevin. I really need to talk to you.", and not much else." Oh, and a lot--a lot--of F bombs. It got to the point where I could tell, by the slightest of pauses from the actors, that they were about to unleash that word.

But the last three episodes made up for the previous seven. Well, Episode 8 was more of the same, but the last image served as a cliffhanger. So the wife and I binged the last two back-to-back. Hallelujah! Mendelsohn was back. Sure, he was still dead, but his 'ghost' kept up a running conversation with John. All that gravitas from Mendelsohn was on full display, and frankly, Chandler did some of his best acting opposite Mendelsohn. Episode 9 was a wonderfully trippy, what's-going-on hour of television that I enjoyed specifically because I didn't know what was going to happen. Might be the best of Season 3. The Finale was good, wrapped up some loose ends, but, ultimately was a little underwhelming considering how fun Episode 9 was. And the last moment, the final bit of this series, left you with an unanswered question. Sure, it leaves the true ending up to the viewer, but come on. We all want things tied up in a bow.

Acting-wise, Mendelsohn really shined in all of his parts, but Kyle Chandler I really enjoyed, too, even when he's often doing the same thing. This is my first time seeing him, and I'm definitely going to keep an eye out for his projects from now on. It was fantastic to see Sissy Spacek again, and her role and performance only gets better as the series moves on. Heck, her final scene is pretty darn brutal.

Overall, Bloodline was an enjoyable show, despite some dull parts. I could actually make a case where new viewers simply watch Season 1 and go no further. That season ended on such a high that it, frankly, never achieved again. But no one is really going to do that because of the questions posed at the end of Season 1.

Bloodline. It's certainly a recommended show despite its flaws, and I'm glad I watched it.


On Father's Day, my new western short story will be released. There may be some mystery readers who also enjoy westerns, so I'm letting everyone here know about it.

A man shouldn't outlive his son. Neither should his killer.

IN A SEARING NEW WESTERN FROM AUTHOR S. D. PARKER, you will discover all a father will endure to see justice done right by his murdered son.

Luke Russell was a cowpuncher, making an honest way in the world at one of the biggest ranches outside of Junction City. But he got himself in trouble over a girl, and he paid the ultimate price.

Now, a stranger's in town, asking after Pete Davidson, the man who put a bullet in Luke Russell's gut. This stranger is old, and folks realize it's Luke father, come to kill Davidson. The gunslinger is young and vibrant, just like Luke Russell was. The old man doesn't stand a chance.

The answer comes in a brand-new western written in the style of Robert Vaughn, Louis L'Amour, and Chet Cunningham.