You be Thelma. I'll be Louise. 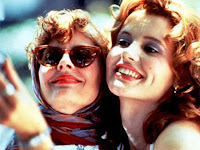 "You've always been crazy, this is just the first chance you've had to express yourself."


Twenty-five years ago, THELMA and LOUISE blazed from Callie Khouri’s brilliant and beautiful mind and into theaters. Initially controversial the film grew to become a classic in many respects, receiving six Academy Award nominations in 1991 and induction into the Library of Congress Film Registry in 2016.


I thought it would be fun to ask a few of the brightest women writers in our community their thoughts and memories about the iconic film.


Jumping to rash action to protect someone she cares about? I'm totally Louise. This movie came out when I was in high school, and even then, I got that it was more than a dead guy and Brad Pitt's backside and friends till the end, but watching it again as a thirtysomething mom who's been blessed by deep friendships with strong women, I see the freedom and the beauty in the story. I can't wait to watch it with my daughters. 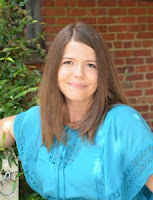 
Being the daughter of a single, hard-working mother, and two very strong-willed great-grandmothers who both worked full-time jobs to care for their families on their own, I very much responded to Thelma & Louise. Finally, in this film were women I recognized, and could relate to, who reminded me of the women in my own family. Thelma & Louise are often called non-traditional, but life is relative to your own experiences. And I love that they go up and down together in everything...and IMO share one of the best onscreen kisses in film history, right there at the end. 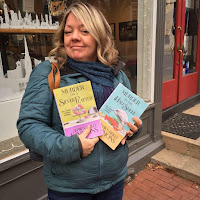 
I saw "Thelma and Louise" with my dad. We were both movie buffs. I was 21 and yes, it was awkward during the Pitt/Davis sex scene, but back in those years, most movies had that awkward sex scene where you just had to tough it out until it was over. Actually, I remember my dad getting up to get more soda or something, which was a relief. But I also remember my dad noticing the metaphoric details I hadn't thought about--the oil fields, the vast roads, the 18-wheelers, the wild west. All of it "masculine."


I wouldn't say it's one of my favorite films, but I'd say it was a great film. I hated the ending, though. I thought it was a cop-out. Yet if you think about it, they had nowhere to go but jail. I suppose I wanted to see them on a Mexico beach, like Shawshank would do a few years later. 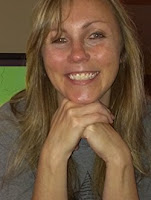 
When I first saw “Thelma & Louise” I think it hit me so hard because it had such a “fuck you” attitude that I immediately responded to, yet it was essentially, a fun feel-good road trip movie. No other film had done that before with two female leads, and as far as I know, has done it as well ever since.

I loved this movie. I remember the drive home after leaving the theater. I couldn’t stop thinking about the ending. How both Thelma and Louise truly believed driving off the cliff was better than returning to the patriarchal society that pushed them to the brink in the first place. In this, it reminded me of Kate Chopin’s THE AWAKENING. The only path to freedom was death. As a mother of two girls I’d like to think death is no longer the brightest option.


Yes, we’ve made strides, but we still have far to go. THELMA AND LOUISE started something. BOYS DON’T CRY. PRECIOUS. THE HOURS. KILL BILL. All powerful and varied examples of movies with strong female protagonists as leads. The movie inspired Tori Amos to write “Me and a Gun” and still it feels as though we have yet to fulfill the promise that began with two wronged women in the desert so many years ago.


THELMA AND LOUISE gave us a momentum that perhaps we squandered. Or perhaps it was quietly stepped on in boardrooms and sales offices. We should be farther along. Our leaps have been small and beautiful, but not nearly far enough.


The march continues. Every woman who was inspired by THELMA AND LOUISE will move forward and inspire someone else and that is how we advance. One friend at a time.


Oh. For the record. I started as Thelma. Excited about the world and pretty sure it was gonna be excited about me but, over time I evolved into Louise. Wary, but holding onto hope until the end and always looking out for her friend.

Posted by Marietta Miles at 8:24 AM