Jon McGoran, known for his own novels -- Drift, Dead Out, and Dust Up -- recently published a tie-in novel for the show The Blacklist.

This Blacklist novel is about a group called The Dead Ring, as is as fast-paced and suspenseful novel as I've read in a while.

Raymond “Red” Reddington voluntarily surrenders to the FBI after eluding capture for decades. He has a list of the most dangerous criminals in the world and is willing to guide FBI operations in exchange for immunity. However, he insists on exclusively working with a rookie profiler by the name of Elizabeth Keen. A tragic warehouse fire in Turkey, a mine collapse in South Africa, a capsized ferry disaster in Indonesia: devastating mishaps, or something more sinister? Red knows these were collateral damage in a highly lucrative and deadly game known as the Dead Ring–anything but accidental. The only way to stop the ring is to destroy it from within. Keen must go undercover and play the game, knowing that in the Dead Ring there can only be one survivor.

Steve Weddle: How familiar with the show were you?

Jon McGoran: I was very familiar with the show. I had watched most of the first season and a good part of the second, but I still got to binge watch a bunch more when I was approached about doing the book, so that was a lot of fun.

SW: Did they give you a “bible” and what was that like? Were there limits to what you could do?

JM: They did not have a bible, which made things a little tricky—especially with a show that revels in the wild plot twists and swings in some of the character relationships. There are always limits, and it really does help to have them spelled out for you, at least in broad strokes. Having watched the show, I had a pretty good idea of what those limits would be. I will say that there are some amazing fan-based Wikis out there, which can be hugely useful late at night when you are wondering about some obscure aspect of a character’s back story.

SW: How many stories did you pitch and did you have one you liked but didn’t get used?

JM: This was an unusual project in that Jon Bokenkamp, the show runner, had a very specific story idea in mind. So they gave me that kernel of an idea, and I had to pitch back three or four iterations of that idea, and then we went back and forth a few times as I fleshed it out so that it was detailed enough so they could be comfortable that it did what they wanted to do and didn’t do what they didn’t want it to do. 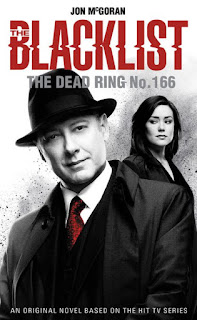 SW: How long did it take to write?

JM: We spent several months going back and forth on the outlines, but by the time the final outline was approved, I had two months to write the book. I’m a big outliner by nature, but in order to get approval the outline had to be even more detailed than what I usually write. With such a short window of time to write, I was very glad to have that outline.

JM: I don’t have anything lined up right now, but I’d certainly be open to it. Obviously, my first love is writing my own stuff, but I do enjoy playing in other sandboxes. In fact, I am honored to have just been nominated for a Scribe Award, from the International Association of Media Tie-In Writers, for a short story I wrote called Drive Time, for an anthology of X-Files stories, The Truth Is Out There. The winner will be announced at San Diego ComicCon.

SW: What are you working on next?

JM: I have a couple of short stories coming out, including a horror story for an anthology called Hardboiled Horror, and one for Joe Ledger: Unstoppable, an anthology of stories featuring Jonathan Maberry’s Joe Ledger character. Jonathan asked me for a story pairing Joe Ledger with my Doyle Carrick protagonist, so that was big fun to write. But I’m most excited about my next book, Spliced, a near-future SF thriller for young adults and all adults, coming Sept. 5 from Holiday House Books. I’ve also been working with on a podcast with some of my fellow Liars Club members, the Liars Club Oddcast, from Project Entertainment Network. It’s also available on iTunes, Stitcher, and iheartradio. That’s been a huge amount of fun.

Good interview, Steve. Interesting to learn the process for this particular tie-in--I wonder if it's similar for others? Sounds like it depends on the people involved. But yeah, if you've got two months to write a book, having a detailed outline is a good start.