Today I welcome back DSD alumna Kristi Belcamino. Her YA novel, City of Angels, comes out Tuesday, and trust me cuz I've read it, you do not want to miss it. It's gritty and harrowing and packs an emotional wallop. There's more on that below, but first, here's a story about staying true to your writer's heart, a subject that Kristi has mastered.

Cinderella Story
By Kristi Belcamino
My journey to publication was a slog. A soul-crushing, ego-stomping, uphill battle through the query trenches, amassing rejection letter after rejection letter along the way. It took nearly a year and 100 rejections, but I finally did get an agent. It took another year - and many more rejections - to get a book deal.
But that's another story. (See here and here for great advice on querying from Kristi.)
Instead of hearing my dreary—albeit somewhat typical story—let’s talk about my friend’s Cinderella Story because that’s what we all want to happen to us, right?
From appearances, my friend’s story truly is a Cinderella Story – she queries agents, gets multiple offers of representation, picks the agent who loves her the very most, said agent sells her book at auction within a few days.
Dream. Come. True. Right?
Don’t believe everything you read.
Behind every overnight success story is the truth.
So, let’s back up and see how all this went down. Keep in mind I am summarizing what really happened in a smart alec way because that’s how I am:
Once upon a time, many years ago, my friend wrote her first book. And then spent years polishing that baby. Making it sing, making it pretty. Until it was so good that her writing group members CRIED IN PUBLIC reading it. (Okay, maybe just one writing group member—who shall remain anonymous—wept in public, multiple times, reading it.) It was THAT good.
Magical.
Then a year before Glass Slipper time, my friend began querying literary agents. She sends her book to an agent she admires. A super smart, butt-kicking, garnering-huge-book-deals-all-the-time agent. A Big Shot Agent.
Big Shot Agent read her book and said, “I LOVE IT. BUT.” The “but” was that the book was too darn SAD. Too many dead people. Big Shot Agent said, “I think this one dude should live. Then the book would be perfect. If you rewrite the story and the one dude lives I will love it forever and it will be the Best Book Ever.”
So, my friend rewrote the book with one dude living. He lives!
But. Her writer’s group read the new version and said, “We liked it better when dude dies.”
My friend was bummed. Majorly bummed. She’d spent months revising so dude LIVED.
I asked my friend, “So Big Shot Agent, being a Big Shot Agent, could sell your book with Dude Living. But is that the book of your heart? The book you want to see on the shelves at the bookstore when you walk in? Or do you want to see book the way you originally wrote it – with Dude Dying?”
After much soul searching, my friend decided to stick to Dude Dying version and began querying agents again. This time, she got multiple bites. Several agents were chomping at the bit to represent her. One agent said, “I LOVE IT. BUT.”
This agent said it was okay if Dude Died, but that really the whole book should be about something completely different. In other words, she would represent my friend, but wanted my friend to rewrite the entire book. Is this sounding a tiny bit familiar?
Meanwhile, another Really Awesome Big Shot Agent said, “I LOVE IT.”
No “buts.”
He told her the book was GREAT exactly as it was.
My friend did some more soul searching.
She went with the agent who loved it without any “buts.”
Even so, she worried. What if the other agents were right? What if their concerns about keeping it the way it was meant it would never sell to editors?
But this IS a Cinderella Story so we all know that didn’t happen.
Before long, her agent sent it out to editors. In a normal story (see my slog story above) it often takes a few months before editors even get back to agents about books they are considering buying.
Not in this Cinderella Story. In this story, agents began to respond within a few days. Within a week, the book sold at auction.
So, what’s the moral of this story?
Write the book you want to write. Stick to your guns. It’s worth staying loyal to the book of your heart instead of writing what someone else tells you to do. Even agents and editors. My friend refused, despite very heady temptation, to change her story. She gambled on her book never seeing the light of day. And guess what?
She won. Big time.
Cinderella Story.
And they all lived happily ever after.
Well, of course, except for the dude who died. 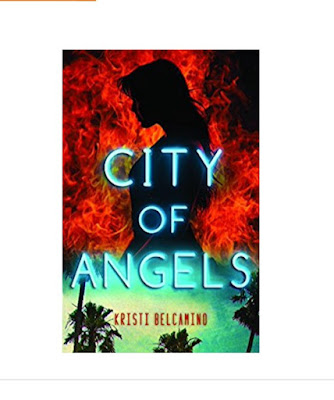 Kristi Belcamino is a Macavity, Barry, and Anthony Award-nominated author, a newspaper cops reporter, and an Italian mama who makes a tasty biscotti. As an award-winning crime reporter at newspapers in California, she flew over Big Sur in an FA-18 jet with the Blue Angels, raced a Dodge Viper at Laguna Seca and watched autopsies. She is the author of the Gabriella Giovanni mystery series (HarperCollins).
Belcamino’s debut young adult mystery, CITY OF ANGELS (Polis Books), comes out May 9, 2017. Find out more at http://www.kristibelcamino.com or order the book here.