The Obit: A Perfect Narrative Arc

The main character in my novel, THE GOOD BYLINE, is obsessed with obituaries. She reads the obits from eight different newspapers every day, culling through each one looking for the tiny details that illuminate a life well lived. For Riley, this is a way to live vicariously through other people because she isn’t exactly setting the world on fire herself. And for me as the writer, this works out well since every murder mystery needs a dead body and the obit section is a super convenient place to find them.

But the idea of writing a character preoccupied with obituaries came from real life— or rather the reasonable facsimile of real life known as social media. A Facebook friend shared a link to an obituary for a man named Harry Stamps with the comment, “This is the best obituary ever written.” The fact that I’d never heard of Harry Stamps didn’t stop me from clicking on the link, which took me to a website called Legacy.com, sort of a central hub for obituaries. Harry’s final goodbye did not disappoint –it was funny and touching and vivid and when I finished reading it, I felt like I’d known this man who lived hundreds of miles away in a state I’ve never even been to.

After I read Harry’s obit, I read another, and another, and eventually fell down a rabbit hole of amazing obits. But even more amazing than the obituaries themselves, were the comment sections. I started to recognize the same user names over and over– these weren’t friends or relatives of the deceased, they were fans! This was an entire community of people who read obituaries as a hobby. It was absolutely fascinating.

I was so intrigued by the idea that there are people who read obits for fun that I decided it would be a great quirk for an amateur sleuth. And I’ll admit that when I started writing, I thought she’d be a dark, brooding sort of character. I figured anyone who chooses to wake up and read about dead people over their morning coffee would have a touch of the macabre about them. But the more I looked into the real life people who do this, the more I realized their fascination isn’t with death, but with life. After all, in a thousand-word obituary, only a sentence or two focuses on the death. The rest is the person’s life story.

So I began reading books and interviews by obituary writers, joined a few obituary forums and chat rooms (yes, they exist!) and as I learned more about this subculture, I noticed my main character became more optimistic, a romantic even. She didn’t go to the obit page because of a preoccupation with death— she went seeking human connection.

I started to realize that for most people, reading obits is all about connecting with others through story. Okay, so it’s also a little bit about looking to see if anyone you know has died. . . but mostly it’s about story. We want to learn how other people lived, what they accomplished, who they loved, because we want to compare and contrast with our own experiences. A life story is perhaps the most universal thing in all of humankind. Everybody’s got one! Whether you’re an accountant living in Chicago or a goat farmer in India, you have a story and it will have a beginning, a middle, and an end. And when you get down to brass tacks, two out of those three elements are going to be the same for all of us.

In its barest form, an obit is a story told from cradle to grave. You won’t find a more perfect narrative arc anywhere in the newspaper. What happens in between those two points is variable- the fun stuff, the heartbreak, the wild, the important, the mundane, the stuff that makes each life unique. And the stuff that brings so many people back to the obit section again and again, like my main character, seeking to connect with others through the one universal and extraordinary shared experience, the story of our lives. 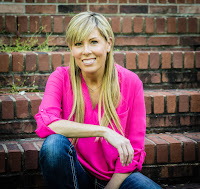 Jill Orr lives in Columbia, Missouri, with her husband and two kids. THE GOOD BYLINE is her first novel. Learn more at www.jillorrauthor.com
Posted by Holly West at 3:00 AM

Jill, it's so interesting how you came upon the obit community!

Thanks for being my guest today, Jill! Really looking forward to reading the book.

Now that my review is written, I can visit this guest post. And it did not disappoint. So interesting how you stumbled upon the obit world. And yes, the perfect excuse to start a murder mystery.