Someone mentioned Cadillac Ranch and just like that, I had a picture in my head. I've never been there, but I could see it. 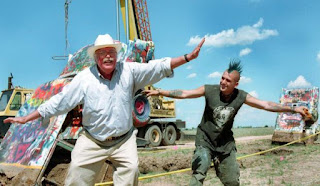 That's Brian Deneke (with the mohawk) and a man named Stanley Marsh, at the Cadillac Ranch. In my memory, Brian is alone in the photo, but I have no way of knowing if there's another one taken around the same time.

I've written a lot about true crime without writing about the first true crime story that really grabbed me. Back in the late nineties, the internet was a small place. A teenager using a search engine (I can't even remember what we used before Google anymore) could type "punk" and get the same couple hundred results. Yahoo groups, a couple message boards. This was before Amazon, or at least before they did anything but used books, and now I'm starting to feel a hell of a lot older than I should...

I have puzzled over how so many people can sit and watch live trials on television, and scramble for any news on Casey Anthony, but I must have read the same handful of articles about Brian Deneke's murder a hundred times. I participated in Yahoo groups that discussed the case, and I waited and hoped for more news.

I'm not going to get into the story. It would sound a little too familiar in light of the number of murders we've seen go unpunished, particularly when the defendant is a great athlete with a "bright future." Repeating it all would get tiresome, because I wouldn't be able to keep myself from drawing parallels to all the cases that have followed, that have ended with a dearth of justice. But this one got to me. This was post- O.J. Simpson, but I was a little too young to be invested in that case. I was invested in the injustice of Brian's murder. I was shocked at the details, though I read them again and again.

The reasons are clear to me now, and they were relatively clear then. Brian Deneke looked like me and my friends. His murderer looked like the guys that made our lives hell. It felt very personal to me and in a way, it still does. In the time since I obsessively read every article and internet post about Brian, the story of his life and murder has apparently been featured on several TV shows and a movie has been made. I managed to miss it. The internet is a lot bigger now. There's a Facebook group for Brian, but the last posts were made over five years ago.

I ask a lot of questions about what purpose true crime serves and what draws us to it, but when I remember my obsession with this murder and the case that followed, it didn't feel like the passing fancy of a true crime junkie. Maybe that's because it was a lot harder to be a true crime junkie then, or because so few of the stories seemed to involve people I could relate to. But Brian Deneke's death had a profound effect on me. I've written about my experiences living in an area where "big story" true crime was simply "life," but all of that seemed to follow my first taste of true crime obsession.
Posted by Renee Asher Pickup at 3:00 AM