Crime & Punk: It's OK To Push Back - Ian Truman

Ian Truman is taking over my Friday spot to talk a little bit about the connection between punk rock and the drive to create.
Ian Truman is the winner of the 2013 Expozine "Best Book", Ian Truman is a Montreal born writer of poetry and fiction. His latest novel, GRAND TRUNK AND SHEARER, is available from Down and Out books.

It's OK To Push Back
I never really went to the big arena concerts, places like the Bell Centre and such, and I kinda feel lucky about that now. I feel lucky I was introduced to “legitimate” punk pretty early.
See, I was bullied a lot back in high school and in many ways I was your typical 90’s geek: too tall, too skinny, no muscle on the bones, anime club a decade before anime was “normal.” I was the kid that was hiding in the library as much as I could and I have zero problem admitting it was because I liked it as much as because I needed a place to hide.
Now I think it was maybe in my fifth year of high school and I was hanging out with this weird fucking metalhead, one of the few other loners we had at school, and when I mean weird, I mean that he used to listen to metal sure, but in reality, he was trying to make music with a grinder over a vacuum cleaner and some white noise in the background and some bass drum filled with cans and trash or something. THAT guy, you know?
In many ways he was probably the punkest guy I have ever met. He really, absolutely and truthfully did not give a fuck about what anyone would ever think of him. He didn’t care about tags of labels or punk, metal, grind of the very concept of music. He just did whatever came to his mind. He was also probably the smartest guy around and didn’t have one once of malice in him. I would swear to that.
So this kid, who by then had been kicked out of the school radio club for playing his music there, told me he was going to bring me to this place they called “L’X” one day.
“You’re gonna love it,” he said.
I said, “OK,” simply. Because what the fuck did I know about anything? That was about to change.
So one day we pack ourselves in his tiny car. That thing was a fucking Pinto, if you remember those, the rest of you can google them. That thing was a goddamn pinto. He later sold it to some monster truck show that defined the tiny box or a car as “absolutely perfect.” Anyways. So we packed ourselves in that car and we lived about an hour away from Downtown. He brings us there and it’s in the heart of Quartier Latin and, I mean, it looked like a fucking wasteland.
This wasn’t the “Quartier des Spectacles” of luxurious condos, SAT gallery and designer gyms. This was the fucking red light in all its glory. I think it was 98 maybe.  It was the Montreal of insanely high unemployment, mental-hospital deinstitutionalization, spiking homelessness, post-referendum-traumatic-stress and population flight.
Half the buildings were abandoned, there were vacant lots everywhere, some village made out of planks and cardboard, FOUFS was across the street and a gathering of maybe 60 bikers in a parking lot in front of an downright corporate ice cream parlour (yes, I’m serious) You stopped counting the needles and just found a path around them. I remembered some guy on the second window of an 18th-century row house selling contraband cigarettes up and down a bucked he pulled with yellow string.
And L’X was right in there, about a hundred inside the red light district. It was some room in this fucking historic building, abandoned or it seemed abandoned, it definitely looked abandoned. But there was definitely something happening there. And the place, I mean, it was this magnificent stone building, six or seven stories high with all the tall windows and the metal sculptures over the main entrance. “La Patrie” had been sculpted in the stone. The kind of shit you’d put in a movie or the kind of shit you say in movies that took place in New-York. You know “the” building I’m talking about.
In many ways, you could say L’X was Montreal’s CBGB’S. 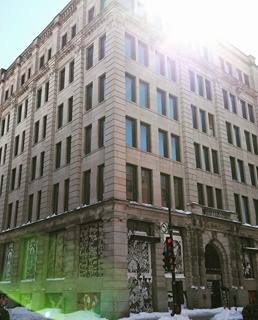 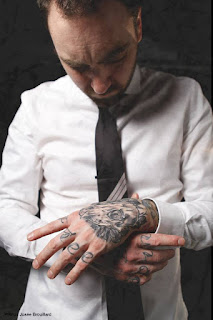