Why was it a conflict of interest? Maybe that's not even the correct term. As someone who, then, was about to be published, I began feeling squeamish about giving anything less than a 5-star review. And up to that point, I'd reserved 5-star reviews for books that absolutely hit it out of the park--books I'd loved for years (THE SECRET HISTORY by Donna Tartt comes to mind), had read more than once, books I considered an influence to my writing.

By this definition, a 5-star book was exceedingly rare for me. It also meant a 4-star book was excellent and probably, a book that many people would consider 5-star. But how would my author friends view a 4-star review from me? After all, they didn't understand that for me, 4-star meant the book was great.

Rather than risk offense, I stopped writing reviews altogether.

After I got published, I realized first hand just how important those book ratings are, especially on Amazon. Though I've only got the vaguest idea of how their algorithm works, I do know that MISTRESS OF FORTUNE, my book with the most reviews (21) never reached the number required to trigger any sort of additional promotion. And that's okay. From this experience, I learned just how hard it is to get people to write those reviews.

I decided I would write reviews again, especially for those authors for whom I knew my review would make a difference. Blockbusters like THE GIRL ON THE TRAIN (which I'm reading now and loving) will benefit from a review/rating, but with numbers in the thousands, my review doesn't make much of a difference. But for the book that has twenty or thirty (or less) reviews? My review can help.

I also loosened my rating criteria. I'm much more likely to rate a book 5-stars now (although 4-stars is still an excellent rating from me).  I won't review books I can't give at least 4-stars.

In spite of my decision to resume writing reviews, I never really followed through on it. Part of it was the concern that whatever I wrote would sound stupid and/or trite. Filled with cliches. I'm a writer myself so my reviews should be brilliant, right? The pressure I put on myself prevented me from writing reviews on any regular basis. Also, I'm lazy. Writing a review was just another thing to put on my to-do list. 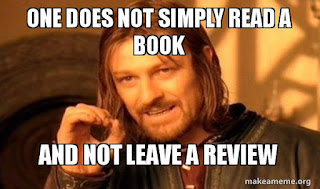 But as of 2017, the excuses are no more. I resolve to write reviews of every book I read that's 4-stars or higher. These reviews might simply consist of me saying "I loved it!" but goddammit, I'll review that book. I'll reserve more eloquently written critiques for posts on Do Some Damage, when I see fit.

The reason for this new resolve? I've been moving toward it (that is, thinking about it) for awhile. But when Eric Beetner and I wrote our end-of-year post about the books we loved in 2016, I realized I wasn't as much of an advocate to the book community as I wanted to be. So not only has Eric inspired me to eat fewer french fries, he's also inspired me to put reading higher on my priority list and to take the time to write reviews of the books I love.

Do you have any book-related resolutions?

Your book recommendations are always spot-on, Holly, so I am glad that you have made this resolution.

You are so right about the books with less reviews - not lesser books - gaining the most impact from the few reviews they do receive. I rarely take the time to review a book on my blog if it is guaranteed to hit the Bestseller list - even though you can bet I read the book.

Great points here, Holly, and a great resolution! I've struggled with this myself--and with an additional wrinkle in that I've been reviewing for the Washington Post and Mystery Scene and others for a long while, so the idea of how those five-star reviews stack up in one place (where I might often end up "reviewing" friends books I'd read) versus a different kind of critical writing in another place (with strict rules about avoiding conflicts of interest, etc.)... well, I felt like it was tough to reconcile all that, so I just didn't (and don't) review folks on Amazon and Goodreads.... though even as I write that, I still feel the struggle internally about being someone who would appreciate those reviews and yet being reluctant to give them myself and..... Well, you see even from this comment how I struggle.....

Thanks, guys. Art, I hear what you're saying and understand why you struggle. I'm not sure what I'd do under these circumstances--probably just what you've been doing. And don't forget, beyond reviews, there are other ways you're a huge advocate for the writing community. The fact that you consistently promote other authors (including myself) is just one of the ways.

There's no right or wrong answer to this, I think, unless a person is deliberately acting w/out integrity. There will always be those that don't share our ethical concerns, but for the most part, the writing community does it's best.

This post resonates so deeply with me, Holly. Thank you.

Thanks, Holly, for the response and specifically the recognition that there are other ways to give back and support the community. I do indeed try to do what I can, when I can! :-)

Art--believe me, it doesn't go unnoticed. And I'm trying to follow your example, even if I fall short.

Danny--Glad you liked the post. I'm looking forward to reading and reviewing your book very soon. :-)

Glad I could help inspire your resolution. Now if I could just train you in the proper use of less and fewer....

(Don't you miss our playful banter in person?)

Why do you think I'm going to Chicago?

I can totally relate, Holly--about the self-critiquing of anything I write about someone else's writing, about the whole 4- or 5-star thing, and the todo-around-writing list. Much food for thought, and it's never too late in the year to make resolutions.

Great post, Holly. I went through the very same thing recently. I took my reviews extremely seriously, maybe it was the bookseller in me, I don't know. I rarely gave 5 stars because for me, that's something that is perfection and a book I was heavily influenced by, like you say (TO KILL A MOCKINGBIRD, BIRDMAN by Mo Hayder, and CLOSER by Sara Gran for me). 4 stars was still something that knocked it out of the park for me. But once I started to understand the whole Amazon algorithm thing (not that I really do) I felt like I should leave reviews for friends' books. Then I felt uncomfortable giving friends 4 stars in case they took it the wrong way (which still means I LOVED the book) so I stopped as well. But now I'm relaxing my rigid stance (because really, why am I taking myself so seriously?) on 4 v. 5 stars so I can post more freely on GoodReads and Amazon (even if it's just a few words), especially for those books I enjoyed that have 20 reviews or less. More in-depth reviews I save for book industry sites and the store newsletter (where we don't have to fuss with those stupid stars).

I'm glad you weighed in on this, Sarah, because I noticed your reviews on GR and thought, see, if Sarah doesn't feel weird reviewing, why should I? Good to know you kind of went through the same thought process I did.

I love books and I love promoting them. Doing it on GR & Amazon is a big way we do it nowadays. It helps good books get noticed that might not have otherwise. I want to be a part of that.