Andrew Nette guest blogs this week.  Andrew has a new novel out, Gunshine State, a heist novel set in Australia and Thailand, and I can vouch for it being a fast, tense read.  Andrew knows what he's doing when it comes to constructing a crime novel, and in Gunshine State, he delivers the goods.
But why plastic surgery noir? Well, this is where he will explain.

Guest Post by Andrew Nette
I’ve long been fascinated with the idea of plastic surgery in fiction and film. I’m not talking about a bit of a facelift or a tummy tuck. I’m talking about going the whole way and changing your entire appearance.
The idea that, for whatever reason, if things get too difficult you can change how you look and start a new life free of your previous problems is tantalizing.
As a plot device, I first came across it in the science fiction comics I devoured when I was young. The first movie I can remember seeing that used it was Delmar Davies’ 1947 classic, Dark Passage, starring Humphrey Bogart and Lauren Becall. 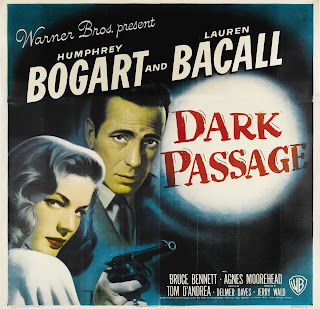 Bogart plays Vincent Parry, a man falsely convicted of murdering his wife. He escapes from prison in order to prove his innocence but realising he is too well known to evade the police, seeks some illegal backroom plastic surgery. While he is recovering Parry hides in the apartment of a sympathetic young artist (Bacall), who he develops feelings for. New life achieved, except Parry can’t let go of the need to find out who killed his wife.
The best-known crime novel I can think of that uses plastic surgery is Richard Stark aka Donald Westlake’s 1963 Parker story, The Man With the Getaway Face, where, in an effort to escape the Mob, Parker gets a corrupt doctor to alter his appearance.
My second novel, Gunshine State, is a heist gone wrong story set in Australia and Thailand and I was determined to get a plastic surgery angle into the story. My main character is Gary Chance, a former Australian army driver, ex-bouncer and thief. When his latest job working for an aging Surfers Paradise standover man goes south, Chance finds himself on the run and rapidly coming to the end of his options. Which is where the plastic surgery angle comes in. Chance’s boss, who is worried his employee’s problems will become his own, suggests Chance travel to Thailand, one of the world’s leaders in medical tourism, including plastic surgery, to completely change his appearance.
One of the things I like about Dark Passage is that we are 62 minutes into the 106-minute film before we actually catch a glimpse of Bogart’s face. Everything previous is either from his perspective or his face is obscured in bandages or shadow. But I find the ease with which the plastic surgery goes off very unconvincing.
It’s the same with The Man With the Getaway Face. Sure, problems arise when an employee of the doctor who did the surgery gets ideas about blackmailing Parker in return for keeping his new appearance a secret, but the surgery itself is relatively easy and very successful.
I found researching the plastic surgery aspect of my novel absolutely fascinating but writing it was hard. Not only because I wanted it to be realistic, but because I didn’t want Gunshine State to have a garden variety plastic surgery angle. I wanted things to go wrong. How wrong? Well, you’ll just have to read the book to find out, but let’s just say deeply fucked up wrong.
There’s actually a small but influential body of films that deal with the dark side of plastic surgery that provided me with a lot of ideas and inspiration while I was writing my own take on plastic surgery noir.
Here is my top five: 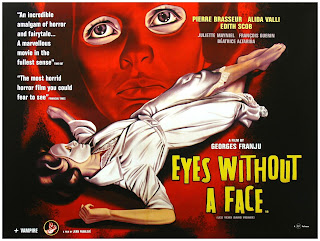 Eyes Without a Face, 1960
This French film, directed by Georges Franju, is pretty disturbing today so one can only imagine how people received it in 1960. An influential surgeon (Pierre Brasseur) causes a car accident that leaves his daughter horrifically disfigured. Wracked with guilt he kidnaps people, surgically removes their faces and grafts the faces onto his daughter’s damaged features. The failure of each attempt only leaves his daughter more psychologically traumatized and the doctor more desperate to make the next operation a success. 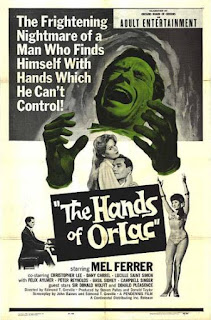 The Hands of Orlac, 1960
Stephen Orlac (Mel Ferrer) is a world famous French concert pianist whose hands are badly burnt in an accident. A last minute transplant using the hands of serial strangler, executed on the night of Orlac’s accident, holds out hope the pianist will play again. But Orlac begins to experience violent feelings, including the desire to strangle animals. Fearing for his sanity, he flees to the seedy port town of Marseille, where he bumps up against a criminally inclined stage magician (a wonderful turn by Christopher Lee), keen to use Orlac’s problem for his own benefit. 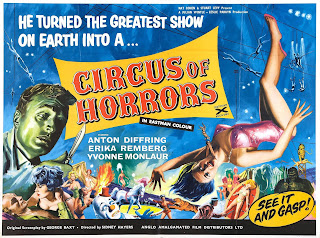 Circus of Horrors, 1960
1960 was obviously a big year for creepy films about plastic surgery. Circus of Horrors involves a criminal plastic surgeon who flees England for the continent where he operates on a circus owner's daughter, deformed by bombs left over from World War Two. He becomes the owner of the circus and gets his thrills transforming disfigured women into the stars of his show. The police get suspicious when the women, who want to leave the circus, start dying in freak accidents. Mansion of the Doomed, 1976
A Los Angeles eye doctor, Leonard Chaney (Richard Basehart), is obsessed with reversing his daughter’s blindness, brought about by a car accident he caused. With the help of his assistant (Gloria Grahame, no stranger to the lure of plastic surgery herself), Chaney snatches people off the street and surgically removes their eyes to transplant to his daughter. Her mental health gets worse with each failed operation. Chaney imprisons those whose eyes he has taken in the basement of his house, with disastrous consequences. 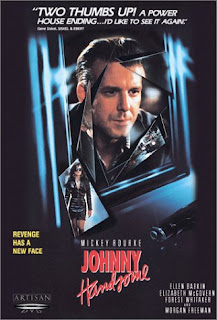 Johnny Handsome
The main character in this 1989 crime drama, directed by the king of the intelligent B-movie, Walter Hill, is John Sedley (Mickey Rourke), a disfigured criminal who lands in jail after he's double crossed by his partners (Ellen Barkin and Lance Henrikson). While in prison, Sedley is given a radical surgical procedure that leaves him looking like a normal person. He tries to go straight upon release but, given that he's the same hardened criminal on the inside, he cannot resist getting revenge upon his former partners.

Gunshine State is published by 280 Steps and you can find out more about the book right here.

And you can buy Gunshine State HERE.

Related to this crime fiction motif: There's a very fine noir novel called The Plastic Nightmare (1969) by Richard Neely that was turned into the movie SHATTERED (1991) directed by Wolfgang Peterson, and starring Tom Berenger, Greta Scacchi, and Bob Hoskins. Both are worth anyone's time. I enjoyed the movie a lot and it's very faithful to the novel. There is a very memorable and rather shocking climax to the movie that still remains in my overstuffed cinematic memory of viscerally effective scenes.

Watching the crime stories or reading the books is not an easy task but it should take us on mind tweaking, as per the resources we have to go for https://mobdroappdownload.co/, site to enjoy the unlimited crime movies, shows, live events.