Black Mirror is one of the greatest shows on television, but I would not recommend binge watching it. For one, there are only thirteen episodes in three seasons and a holiday special; you can do it in a weekend and then you'll have to wait a year, at least, before NetFlix releases another, and secondly you might die of dehydration after you weep for humanity.

The generic view of the future has become dystopian, and many science fiction writers (such as David Brin, and the authors who contributed to Hieroglyph: Stories and Visions for a Better Future think that this is contributing to a hopelessness that makes such a future a self-fulfilling prophecy. Read Brin's dissection of The Idiot Plot, a story that only works if all institutions are deadly stupid, for an idea. In general the system works, but we all agree that it doesn't; the average person distrusts the federal government but approves of what they do (highways, national parks, Medicare, disaster relief, etc). Are "gritty" visions of the future dooming us to seeing it as inevitable?

Black Mirror is no different, it is usually a show about the perils of technology, or rather the unintended consequences of an increasingly connected world. One shining light of hope in the series is "San Junipero," directed by Owen Harris (Kill Your Friends), written by series creator Charlie Brooker, and starring Gugu Mbatha-Raw (Tish Jones on Dr. Who, and Famulus in Jupiter Ascending) as Kelly and Mackenzie Davis (Mindy in The Martian) as Yorkie. This one is rather hopeful, and part of me wonders if everyone's enjoyment is due to it being a diamond in the rough, rough, rough horror tales of the third season's masterful run.

When we meet Kelly and Yorkie, two young women on a permanent vacation in a beautiful island set in the affluent late '80s, complete with neon night clubs and arcades, they seem to be in a sort of loop. Yorkie is a bit nerdy and socially awkward and Kelly is outgoing and breaks her out of her shell. But there's a mildly creepy element to it, like a chat room come to life where everyone becomes the ideal avatar of themselves and puts their best selves forward. There's some drama as well, but the story never takes the darker turns we expect. The characters are whole and have their own feelings and needs and desires, even in a strange little paradise that only seems to exist on weekends.

Clint Mansell's score and the use of Belinda Carlisle's "Heaven on Earth" help keep the mood up when we learn the secret of San Junipero. Scroll down if you don't mind spoilers. 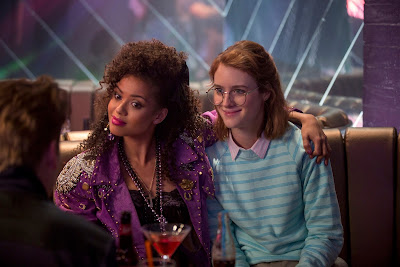 It's too good to be true, of course. It's a simulation, and the week-long hiatuses are because it is therapy for the elderly, to stave off depression and dementia, and lives for the bedridden. The "real" world doesn't look all that horrible, but we could just be seeing a very affluent assisting living facility and hospital; we never know. It's the dream of being able to upload your consciousness into "The Cloud" and become immortal as a collection of ones and zeroes, in an immense server farm, for as long as the electricity keeps running. It's been explored before in stories of "The Singularity" such as Charles Stross's excellent Accelerando and others, but this one was especially tangible and hopeful, that we would use this as a gift to lonely older people whose friends have all died or "crossed over" as they call uploading to the cloud (which may or may not be in a world where you exist; it's unspoken but assumed that "Heaven on Earth" is not the same for everyone.)

If you think that's too sappy for you, watch the first three episodes of season 3. Or just skip to "Playtest," one of my favorite horror stories in some time, and "Shut Up and Dance," the best techno-thriller I've yet seen. It is truly terrifying, and utterly without hope, so watching "San Junipero" directly afterward is especially soothing. I kept waiting for the horrible reality, and I was relieved when it wasn't there. It's certainly not pleasant; Yorkie and Kelly have both suffered tragedies, but who doesn't?

So, what are your favorite stories with hopeful visions of the future?

Not sure there is a hopeful vision of the future. Roddenberry had hope that infused itself into the fabric of Star Trek but some of its best stuff has been quite dark.