Over the River and Through the Woods


By Claire Booth
We came back from Grandma’s (and Grandpa’s) house yesterday. It’s a drive that takes a little less than two hours, which is just about perfect. Not so long that you go crazy from being stuck in the car forever. Not so short that you barely get settled in before you’ve gotten where you’re going. It’s just the right amount of time for some serious brainstorming. 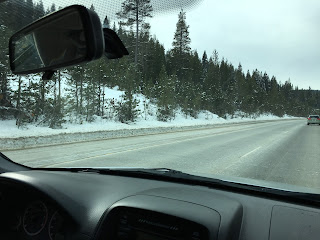 My mind wanders more on car rides than it does almost anywhere else. And for a writer, there’s nothing better. One random thought leads to another and another, and before you know it, you have an idea.
And that, after all, is our bread and butter, isn’t it? Ideas. Some amount to nothing, some start out as brilliant and then fizzle, and some – those rare gems – become actual stories.
As we whizzed along on the interstate yesterday, I had an idea for a stand-alone thriller, pondered a different take on a short story I’ve been mulling for a while, and came up with more character development for my next Hank Worth book.
That’s a pretty good start to the holiday travel season.
Posted by Claire Booth at 3:00 AM

Funny how that works. I came up with a kick ass idea for a novel in my series while raking leaves yesterday.

We hosted TG this year and I came up with 0 ideas this weekend. Well, not 0 exactly, but I didn't have any real time to myself to plot or plan.

Glad you had a great weekend!