When Batman Met The Shadow: Batman 253 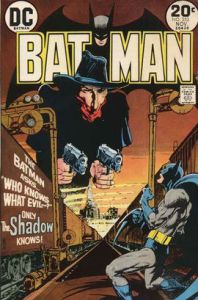 As much as I love and enjoy continuity and canonization of material in comics, I also appreciate the more free and open days of the past. Nowadays, DC Comics controls Batman so much that EVERYthing he does is canon and must align with every other book being published. The same is true for just about every other property published in comics nowadays. It’s great because we typically get great titles and stories, but the chances that characters from two universes meet can be pretty low.

Now so in the early 1970s. Batman was enjoying a dark renaissance after the comedic turn he took in the 1960s in both comic and on television. Denny O’Neal and Neal Adams had taken the Dark Knight back to the night and returned him to the atmospheric stories from the 1940s. By 1973, DC had earned the right to publish a new series featuring the pulp hero The Shadow. Denny O’Neal was the writer of that series as well. So I bet it was a no-brainer to have the two dark detectives meet.

Batman 253 was the result. These were the years where Batman’s typical rogues gallery was off-limits to writers, so Batman would face bad guys that were a whole lot less colorful but no less deadly. In this story, titled, “Who Knows What Evil?”, Batman tracks some goons to the docks. I got a huge chuckle and thrill with the opening text of the story: “It is a dark time at Gotham Freight Yards, when dawn is no more than a distant promise…a time when furtive men do furtive things…and when the Batman moves like an avenging wraith.” Pure pulp goodness.

No sooner does Batman take out the goons than one nearly gets the drop on him. But a bullet from the shadows knocks the gun out of the goon’s hand and Batman survives. He hears laughter, “coming from everywhere…and nowhere.” That’s his first clue. Alfred helps Batman figure out that the counterfeiters are based out of Arizona, Tumbleweed Crossing to be exact. Bruce Wayne arrives by bus—yeah, you read that correctly—and gets a room at the local hotel run by an old geezer named Bammy. No sooner does Bruce arrive than a gang of young hoodlums in dune buggies zoom through the town. The slang O’Neal writes for both the youngsters and Batman is so charmingly late 60s/early 70s. Again, after Batman learns that the hoodlums got bribed with “Fool’s money,” he hears the laughter again. Now, he starts to think it may be “Him.”

Later, at the hotel dining room, Bruce meets Lamont Cranston, complete with gray hair on the temples. Bruce doesn’t know of Cranston’s alter ego, but a remark from Cranston is the last clue Bruce needs. Here, in another charming note that’s now gone from comics, there’s a little yellow box: “Bruce [Batman] Wayne seems to have cracked the case! Have you?” It allowed young readers to be detectives. Love this. Later, toward the end of the book, another clue is revealed. The editor wrote a note with the page and panel number. Sure enough, the clue was there. Wonderful stuff!

As you’d expect, Batman travels to the counterfeiter’s hideout and fights them. And, in a very Robin-like move, Batman gets ink thrown in his face. His mysterious benefactor rescues him again, then leaves a note to meet back in Gotham the next night. They do, and The Shadow reveals himself. Basically, Batman is a huge fan and just wants to shake the hand of the old pulp hero. The Knight of Darkness, on the other hand, wanted to know if the Dark Knight deserved his reputation. He did.

As the Shadow melts into the night, Batman asks if the Shadow will come out of retirement. You know what the Shadow’s reply is before you even read it: “That…only the Shadow knows!”

This was such a fun issue. It lead directly into the Shadow comic series. The two heroes would meet again in Batman 259…but that’s a review for a different day.

Email ThisBlogThis!Share to TwitterShare to FacebookShare to Pinterest
Labels: batman, The Shadow