Banned Books, or Why Captain Underpants is a Benefit to Society

By Claire Booth
Banned Books Week ended yesterday. It’s a week that celebrates the freedom to read. I love this week. As a reader and a writer, there is very little that is more important to me than people being able to write, publish and read what they choose.
This year, I was curious to see what kinds of books have been challenged lately. In perusing the lists compiled by the American Library Association (one of the fiercest defenders of the Right to Read), one entry in particular caught my eye because it shows the utter ridiculousness of those who are challenging books. 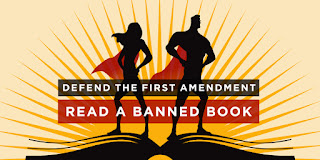 In 2012 and 2013, the most challenged book was Captain Underpants, by Dav Pilkey. Challengers claimed it was “unsuited to the age group.” Pardon me as I laugh hysterically. Have you been around an eight-year-old boy? For even ten seconds? Because the people protesting obviously have not. No author has better hit the sweet spot for that age group than Pilkey. 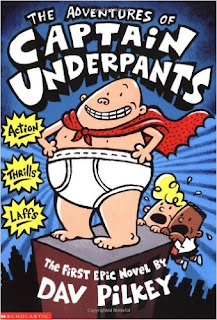 Now, you as a fuddy-duddy adult can roll your eyes at the quality, or the artwork, or the tattered condition of the library copy (because it’s been checked out so much). I have done all three. But you know what trumps all of those criticisms? The kid with his nose in the book.
I work with a lot of kids. And yes, in an ideal world, they’d start out with Anne of Green Gables, or the Hardy Boys. But that’s not how it works for most kids, especially ones who don’t necessarily have parents who are readers or tons of books available to them at home. They need an entry point. And for a lot of children, silly potty humor with underpants pictures is that doorway. When they’re done with that series, they want more. They might go on to Diary of a Wimpy Kid (also with pictures), or branch out into primarily text books like the Magic Treehouse series.
And then before you know it, they’re asking you for thicker, more complicated, more difficult books. Like Goosebumps, or James and the Giant Peach, or Blubber by Judy Blume. All of which have been challenged, according to the ALA. Why – because they’re too scary? Or too fantastical? Or too much like real life? Give me a break.
Each of those books speaks to certain aspects of a child’s world. Not every child is going to want to read all three of them, of course, but that’s why there are so many choices. That’s why there NEED to be so many choices, especially for young readers. Let them explore, find what they like. Then later, when they are a little older, they will be much more open to reading what perhaps doesn’t directly relate to their world. Books that about people who aren’t like them. Books that talk about different societies or problems or circumstances that the reader hasn’t experienced.
Because that is the beauty of books. They take the reader to places they couldn’t otherwise go. Whether it’s Hogwarts, or the Mississippi River in the 1800s, or a Native American reservation, or a post-apocalyptic Earth. Those books have been challenged, too. By people who not only have no desire to expand their horizons, but also think they have the right to dictate the horizon expansion of everybody else. And that is not okay.
So this weekend, I’m going to pull out my copy of The Adventures of Huckleberry Finn or maybe The Absolutely True Diary of a Part-Time Indian, and give thanks for thought-provoking, boundary-pushing stories and the people who fight to keep them on the shelves. They’re superheroes, just like Captain Underpants.

I find it interesting that you mention the Hardy Boys as being a starter series in an ideal world, because when I was a kid many long years ago, that was a series, among others published for kids by Grosset & Dunlap (think Nancy Drew and Tom Swift, Jr., for instance) which school librarians disdained and would not include on their shelves.

As far as I'm concerned, almost anything short of pornography or hate treatises, that gets a kid reading and enjoying books--and I've maintained for decades that reading is probably the healthiest addiction anyone can have--is worthwhile. This is especially true in an age when distractions like video games and various Internet diversions reign.

Barry, I agree completely! Anything that succeeds in interesting kids in books is a winner. I hadn't realized that about the Hardy Boys being so disdained by librarians. I'm glad those times have changed. That series and Nancy Drew have created so many mystery lovers. They're invaluable to the genre, don't you think?