The Best Homework Assignment Ever


By Claire Booth
After untold years of horrible reading assignments – from tearing apart The Great Gatsby until there was nothing left except the light at the end of that damn dock, to analyzing medieval texts regarding the roles of women, to pouring over city council budgets while a newspaper reporter – I have finally finally been tasked with something enjoyable.
I am getting to read some of the best mysteries from one of the best periods in the genre. The Golden Age. It’s the subject of a panel I’ll be on at Bouchercon this coming week and it’s given me the best homework assignment I’ve probably ever had. 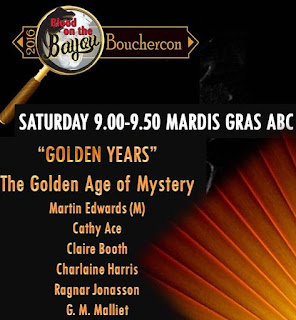 The Golden Age is generally considered to be the 1920s and 1930s. And if you’re not necessarily familiar with the time, you’ve probably heard of a few of the authors. Agatha Christie, Dorothy L. Sayers, G.K. Chesterton, Anthony Berkeley. The list can go on and on. I’ve gotten to revisit some of my absolute favorites, and I’ve discovered fantastic writers I hadn’t heard of.
But what makes a writer a true Golden Age author, and what makes the whole period so special? If you’re in New Orleans next weekend, The Golden Age of Mystery panel would love for you to stop by and join in the discussion.
And if you feel that the Golden Age extends past those time borders or that there’s an author who should be placed in its pantheon, let’s meet at the Bouchercon bar for a drink afterward and a chance to extend my wonderful homework assignment.
Posted by Claire Booth at 3:00 AM