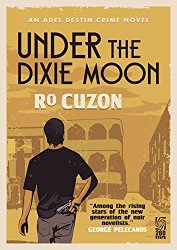 Just yesterday, as we said goodbye in the hotel lobby, Scott Adlerberg and I lamented about what we'd write for our Do Some Damage posts this week. He came up with a good one, so if you missed yesterday's post, here it is. What he said, although in my case, I'm reading Ro Cuzon's UNDER THE DIXIE MOON, which is also set in New Orleans. It's noir at its sweaty, gritty best and Ro's writing chops are top notch, particularly for this type of fiction.

Note: Having eaten some of his fine jambalaya this past week in New Orleans, I suspect his pork chops probably are pretty good, too.

I'm not too big on conference wrap-ups, I'm not sure why. Let's just say Bouchercon 2016 was a great conference where I strengthened many friendships and cultivated some new ones. This, for me, is what it's all about.

Beyond that, I want to mention a couple of things that stood out to me while I was at the conference, both of which occurred during Harlan Coben's interview with Michael Connelly. Harlan told us his breakout book--Tell No One, if I'm not mistaken--was the tenth novel he'd written. Furthermore, his advance for the first Myron Bolitar book was $5000. His advance for the fourth? $6000.

Clearly, the path to becoming a best selling author can be a long and arduous one and most of us probably won't make it at all. Which is a little depressing to think about, right? But the information Harlan shared actually inspires me and makes me feel better about where I'm at in my career. My first two books did not sell very well and sometimes this gets me down but I need to remember that there will be other books (provided I stop f*cking around and finish the one I've been talking about for two years).

Other than that, I'm exhausted and happy and ready to work. So let's do it.

Nice piece. Funny how when you leave NOLA, all tired out, you still want to stay there at least through a book.

I was so ready to leave NOLA on Monday and this morning when I unpacked my souvenirs I longed to go back. It gets into your soul.