I've been a big ball of stress. My big personal flaw is never feeling like I'm doing enough until I'm doing so much I'm crumbling under the weight of it. There's always that sweet spot where I have just enough to do to feel motivated and satisfied, but it passes quickly.

This leads to some strange bouts of self doubt. I am running a magazine and feeling like I'm not working on anything. Yesterday, though, I got a little TimeHop reminder that I published my first short story four years ago.

Four years! It was a much needed shot of perspective. I've actually accomplished a hell of a lot since I decided to start taking the writing thing seriously. I'm not going to get into listing all my publications and accomplishments (because when I see it all on paper it feels like very little again, and the drive to "do more" gets the better of me).

It wasn't a crime story, it was a love story, mostly. I worked on it for weeks, passing it back and forth with a good friend I've since mostly lost touch with. I found out it was going to be published while watching a Chinese Dragon show at the San Diego Zoo.

I got this tattoo the day it was published: 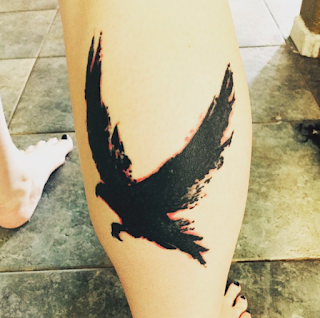 It's based on a line in the story, "A murder of crows was living inside me."

It was a big day, but it was only four years ago. Only. I gotta work on keeping that in mind.
Posted by Renee Asher Pickup at 1:15 PM