To Shoot or Not to Shoot: Writing Violent Fiction in a Violent World


Nick Kolakowski guest blogs this week.  Nick's work has appeared all over the place, and now he has put together a number of his best short stories in one collection called Somebody's Trying to Kill Me. I've heard Nick read at least a couple of these stories live, and they definitely held my interest.  They were violent and funny, but the humor didn't make the violence feel cavalier or frivolous.  Nick has obviously given thought to the ethical implications of writing violence as entertainment in a world that's quite seriously violent, and that subject is exactly the one he writes about here.

To Shoot or Not to Shoot: Writing Violent Fiction in a Violent World


The other morning, along with millions of other Americans, I saw the shaky footage of Alton Sterling gunned down in Baton Rouge, Louisiana by a pair of cops. In the clip, the pistol-shots sound like two wooden blocks clapping together, dull slaps without fire. Sterling lies there, his arm trembling, his shirt soaked in blood. It is messy and horrible in all the ways that cinematic death is not.

Sterling’s homicide, along with the murder of Philando Castile in Minnesota and five cops in Dallas, marked a very bad week for this country, re-igniting the simmering debates over race and policing and gun ownership. In the middle of it, someone asked me if real-life horrors ever made me reconsider writing crime fiction.

At the time, I was putting the final editing touches on Somebody’s Trying to Kill Me: 17 Noir Tales, a book that collects a number of noir stories I’ve published over the past few years in Thuglit, Shotgun Honey, Crime Syndicate Magazine, and other venues. It features a lot of murder, some of it tragic, but some of it humorous. “The Last Redemption of Bill,” a story narrated by an ultra-intelligent parasite living in the guts of a public health inspector, climaxes with a crooked cop smashing through the same windshield twice (it’s a complicated bit of black comedy). So I was sensitive to the idea of fictional violence trivializing real-life pain.

Every few years, it seems, I find myself revisiting this particular dilemma. Four years ago, a man shot a former business partner up the block from my office in Midtown Manhattan, only to be gunned down in turn by the cops. I came outside to a street cleared of everyone but police, as crime-scene techs draped the bodies in sheets and carefully marked off spent shell casings. For a few months after that, I drifted away from writing scenes of murder and mayhem, focusing instead on plots in which only feelings were hurt and no people died.

But slowly, perhaps inevitably, physical violence began to creep back into my plots. “How I Spent My Summer Vacation,” one of the first stories I wrote after that shooting (and one of the pieces in this new collection), deals with the bloody aftermath of an underworld business deal gone wrong. A part of my brain was clearly processing my memories, just as it had with the fiction I wrote after 9/11, or when some of those close to me died.

It would be disingenuous to claim that violence in fiction doesn’t offer easy rewards to the author. It provides a structure for catharsis, propels plots forward, and serves as an effective catalyst for a range of character emotions. The audience expects its presence. When Chekhov hangs the gun on the wall, you’re looking toward the moment when it goes off.
For the audience, the relationship with fictional violence is often complicated. Sure, the author might write a violent demise as funny (every bloody death in Tarantino’s early films is played for laughs, for instance), but the audience, depending on their background and tastes, may still squirm uncomfortably. You can use all the tools of the trade to angle a violent scene to serve your ultimate intentions—but just as in real life, the ultimate impact of what you’ve set in motion is often beyond your control. 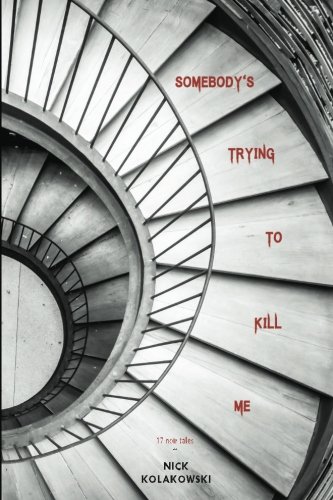 The best you can do is integrate your violence as seamlessly as possible into the story. Indeed, most fictional violence proceeds according to a moral framework. We’re horrified at the atrocities committed by the antagonist; when the protagonist delivers his or her own retribution, it’s in the name of a good cause, and thus restores the balance. (Yet as many works of crime fiction have pointed out over the years, such thinking is problematic. In Drive, the movie by Nicolas Winding Refn, the white knight who saves the widow and her son is also a blank-eyed psychopath; when he stomps a goon’s head to mush in an elevator, or drowns a mob boss in the ocean after a sadistic game of cat-and-mouse, it raises the question of whether any violence is ever “good.”)

As I told my questioner: Every time I see violence in the real world, whether or not it makes the news, I find myself questioning whether it’s wrong to keep writing about bloody murder.

Yet despite those reservations, my characters always find the gun again. And in that moment, with the renewed awareness of what real-life bullets do to real-life flesh, I remind myself that violence is a tool of plot and character, whether used for tragedy or comedy. And in that fashion, violence in fiction manages to separate itself from its real-life equivalent, in which so much is dictated by randomness, and the result is always cruel.

Somebody's Trying to Kill Me is available here.
Posted by scott adlerberg at 2:08 AM

Thanks for a thoughtful post on something I've thought about often.

There's always the possibility a story might influence someone in the wrong way. Still, there's also the possibility of an opposite impact--it might horrify a person so much it discourages him/her from carrying out an act of violence they were considering.
Your post is an excellent one.

Having experienced real violence in my life I try to make the violence in my stories real and make sure it matters. I don't spill blood haphazardly or without consequences.