On Rape in Fiction

Okay, more than one rape scene. There, I said it.

In recent years, or at least since that awful scene in Game of Thrones  aired, rape scenes have been very talked-about facets of the literary world. Before writing this article, I asked Google, “What is so bad about rape scenes?” and was given a myriad of answers. I'm sure you've read some of the the articles that make note of the answer. I'm sure you already understand why rape scenes are problematic. Long story short, this post isn't going to be another rehashing of the “graphic rape scenes are terrible” argument, because there are plenty of writers out there who have explained it much more succinctly than I ever could.

As a feminist, I often read articles criticizing rape scenes and always end up taking a long and hard look at my writing. Often times I feel like I've committed some kind of special feminist sin. A few years ago I had a writer friend casually ask me, “Why do you write so much about rape?”
It was a question I couldn't provide an answer to.

My writing, at its core, has always dealt in some sense with sexuality. My short story collection is called “Vile Men”, and whenever I tell people about my writing career and they ask me for the title of my book, I always cringe before saying it. I know that I'm going to have to laugh awkwardly, and then that I'm going to have to explain it, and then that hidden part of my psyche will fester within the  real world and all of my new co-workers are going to buy my book and read it and then not want to talk to me about what they thought.

People definitely internalize the concept of rape in different ways. As a woman who grew up being told to be wary of strangers, I can say that it doesn't take long to learn that “stranger” really meant “bad men”. It also doesn't take long to learn what it was those bad man do. The concept of rape becomes a thought that never goes away. And instead of fearing it all the time I tried to understand it, tried to play with it, tried to brush it away, tried to overpower it.

Unfortunately there aren't as many articles about rape fantasies as there are about why rape scenes are lazy writing. Most women hide that kind of stuff, mainly because the rape fantasies are believed to stem from some age-old beliefs about the way women should act in the confines of societal standards, as this article states. Women have and still want to be desired, and women have and still are raised believing that any sort of sexual desire is something to be ashamed of. Those messages are internalized and manipulated. Even if a woman has a rape fantasy, she's still the one in control.
That's why it's a fantasy and why most women are hesitant to talk about them. It's personal stuff.
There's a whole genre of erotic fiction about rape and kidnapping fantasies, but I often find most of them unreadable, even if written well. Most of the plots end with some kind of Stockholm syndrome brand of happily ever after. They're never grounded in any sense of realism, and I prefer my fiction to exist in some facet of reality when it comes to human nature. I once wrote an erotica short under a pen-name that I published on Amazon, about a woman who posts a Craiglist ad asking a man to break into her house in order to engage in some rape-fantasy play. It was at least taking the “home invasion” plot but making it consensual. It was rapey but it was also fun, though there was one review I received that criticised the protagonist's decision to let a man break into her house as neither safe nor sane and that the story was horrible for that reason alone, and that criticism just bothered me. If you can't tread those safe and sane borders in fiction, then honestly, what is the point? One could argue that I'm basically making the same argument by taking issue with the “happily ever after” kidnapping storylines, so I'm not exactly one to judge here.

Nevertheless, that's why I have a difficult time writing “erotica”. Fantasies usually make for trashy fiction. That isn't inherently a bad thing, but because I like to keep my fiction within the realms of literary, I often have a difficult time articulating my perspective on the issues with rape directly. Instead, I do it through my fiction. I tell my perspective through my stories.
Rape isn't about sex. It's about power. 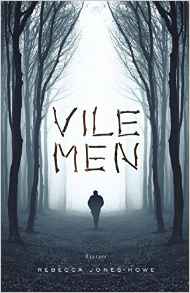 Vile Men is a collection about sex and power. It's about how the genders handle that power, depending on the situations the characters are placed into. Most of the stories are told from the female perspective, but there are a handful of stories told from a male POV as well. Both genders have their handle of power. Most of the sex is consensual, though the collection has two stories that deal with rape. The first, titled “Better Places” is told from the female perspective. The other, “Grin on the Rocks” is told from an insecure male's POV.

“Better Places” is my zombie story, which a lot of people take as being a metaphor of the awful things humans do to each other and how they become real-life zombies. When I wrote it, I wanted the antagonist, Judah, to represent the arrogance people attain when they believe they hold all the cards. When the story's unnamed female protagonist finds Judah's fortified B&B on the side of the highway, she is desperate for safety, and is willing to give him exactly what he wants. Later, when the B&B is raided by bandits, Judah offers up the woman in lieu of shooting them dead. The story takes on an element of ridiculousness when the bandits return day after day, trading Judah luxuries from the outside world for another lay with the woman. Judah dons a silk bathrobe, drinks Chianti, and sprays the woman with expensive perfume. He revels in his vanity and forgets about the world outside. It's a story about entitlement and how it affects those who are alienated by it the most.
My other rape scene exists in the story, “Grin on the Rocks”. The original draft of the story was about a sociopath character and the unhinged life he lives. That draft was what I would classify was “edgy”. Most of the scenes existed for the purpose of being edgy, and I spent a couple years after penning the story trying to tame its message down. It wasn't until after the Isla Vista mass shooting in 2014, and after Elliot Rodger's unhinged manifesto was published online that I picked up the inspiration for the story. I became obsessed with the insecure male conscious and the stereotypes of sexuality that build men like the shooter of that tragedy. “Grin on the Rocks” is about an attractive young man named Jonah who seemingly has no trouble attracting the opposite sex. Women throw themselves at him, and he is powerless to turn away their advances. While he often feels alienated by female sexuality, he is told by his male co-worker that his position is one to be envied. The hyper-sexualized culture of modern society grips Jonah's daily life in such a way that he is unable to understand women and unable to establish a meaningful relationship with one. He sees himself a victim of female sexuality, and ends up reacting in the worst possible way.

“Better Places” and “Grin on the Rocks” are the two stories I'm often asked about in Vile Men. The response is usually positive, and usually incites elaborate discussion that I enjoy taking part in. All I can say is that I never intended to write the rape scenes within those stories from an objective or a violent perspective. I wrote them to examine what rape meant to me. The scenes are intense, but I wrote them with the intent to convey the emotion behind the action, as opposed to just the event of rape itself.

I suppose readers can decipher what they want from those scenes. I've had some feedback from readers who felt the stories leaned more towards trying to be deliberately edgy than insightful. While it can be frustrating as a writer to hear from a reader who didn't understand the point I was trying to get across, I also understand that fiction is subjective. People will write articles about the Sansa Stark rape scene forever, and they are definitely free to do so. Originally I liked the fact that I didn't have to experience that scene though Sansa's perspective, but some of the articles criticizing it have helped me feel otherwise. It still wouldn't have been a great scene had the camera held Sansa's gaze that whole time, but if you compare that scene with rape scenes from Mad Men  or Orange is the New Black, for instance, you can see how those rapes impacted the characters in such a way that charged their characters after.

Honestly, I'm not the ideal person to “defend” rape scenes, because at times even I have issues with the fact that I've written them, and the fact that I will likely still write more in the future. I can't say for sure whether I will or won't. I just write what I write. Most of my fiction stems from some deeply-routed issue I'm dealing with. I don't believe the I write for the purpose of shocking people, or for the purpose of being edgy.

All I have is my writing. So I write.
Posted by Renee Asher Pickup at 3:00 AM