By Claire Booth
Where I live, summer is measured by two things: the number of days that are 100 degrees or hotter, and the quality of your tomato crop.
This year, we’ve had 23 triple-digit days so far. We complain, but that’s about average for a California Central Valley summer. I don’t mind too much, because it’s the perfect weather to hole up indoors and write.
The other summer obsession has the opposite effect, however. Tomatoes make you go outdoors. They also make you crazy – at least this year. 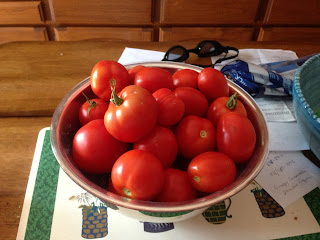 The tomatoes in the above photo? Not this year’s. These were big and fat. Heck, last year, I got heirloom tomatoes so big, one slice would do you for a whole sandwich. This year, doing the exact same thing, I have produced this: 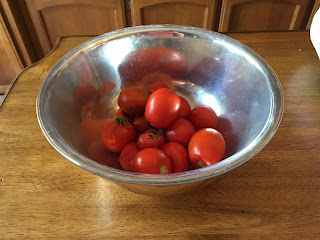 Not a sandwich-worthy one among them.

But I’m not the only one. In talking about tomatoes – which a ton of people do, starting about mid-summer – I’ve found that other people also have experienced late blooms, cracked fruit, and various other calamities. The newspaper even did a story on it.
This made me feel much better. Knowing there are others in the same gardening boat really helped. And the same holds true for everything else in life, really. Finding someone who knows what you’re going through – whether it’s a health scare, car trouble, a tricky writing plot problem, or anything else – makes it more bearable. So here’s hoping you have a support group, and a tomato big enough to make a BLT.
Posted by Claire Booth at 3:00 AM