Book of the Week: ALL THE BRIDGES BURNING 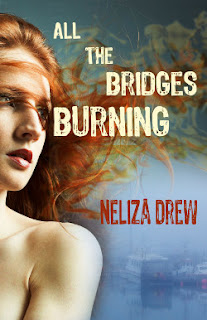 Title: All the Bridges Burning

Pitch: Sisters bound by tragedy.
Davis Groves grew up in a volatile environment. With a dead father and an addict mother, Davis learned early to do whatever it took to survive: fight, lie, steal…even sell her body for money to get by. Above all, she knew it was her job to protect her sisters—always.
Now, she’s settled into a somewhat normal life away from her family, complete with a respectable job, apartment and boyfriend. Her demons have been put to rest, mostly, her old obligations abandoned.
So when her mother calls for help, Davis is all too willing to ignore her…until she says Davis’s little sister has been arrested for murder. There’s no question Davis will go back, that she’ll try to save her sister any way she can. It’s what she was trained to do.
As she investigates, the events surrounding her sister’s arrest begin to unravel, the past Davis thought she’d buried and her sister’s present collide, and Davis is forced to question if she can ever forgive herself for leaving her sister behind.
She may not live long enough to try.

Blurb:
"Neliza Drew pulls no punches in her searing debut. Her characters bear fractured hearts and stubborn wounds that won’t heal, yet even in their darkest hours, they are hauntingly real. ALL THE BRIDGES BURNING is a triumph." -- Hilary Davidson, Anthony-Award-winning author of THE DAMAGE DONE and BLOOD ALWAYS TELLS

Dead End Follies: Toughness done well, stark realism and a strong mystery are the calling cards of All the Bridges Burning.

DSD's own Holly West: Neliza Drew's debut is a compelling, well-plotted mystery, but its real strength is its protagonist, Davis Groves. I haven't encountered such a complex and well-drawn character in a long time and hope that Drew continues the series for awhile to come. To say that Drew has writing chops is an understatement--she's one of the best debut writers I've had the pleasure of reading. Ever. With an evocative setting and a group of supremely dysfunctional but nevertheless realistic characters, All the Bridges Burning is a spectacular start for a writer I look forward to reading for a very long time.

Get Yours: Amazon B&N Elsewhere
Posted by Steve Weddle at 7:39 AM

Neliza did a wonderful guest post over on my blog talking about Davis Groves - you know, just in case anyone needs more encouragement to read this book!!