Perhaps missed in the controversy regarding Ben H. Winters's new book, Underground Airlines, is the fact that the man has written a damn good book.

This alternate-history book tells the story of Victor, a former slave who now works for the US Marshals Service tracking down runaway slaves.

The War of Northern Aggression was averted by a compromise that created the "Hard Four" -- four states that still allow slavery while the rest of the country does not. Victor has located more than 200 runaway slaves from the Hard Four and turned over their locations to the Marshals who, for reasons political and practical, use men such as Victor to track down the runaways. All Victor has to do is call in the location of the runaway and the Marshals take care of the recapturing. More than 200 times Victor has done this. But, because this is the story worth telling, this time it's different.

Winters was lauded by one newspaper for being a white man daring to write from the perspective of a black man addressing slavery. 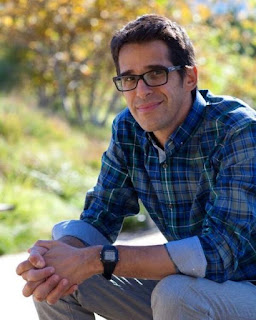 Unlike the new Captain America movie in which White Captain America and White Iron Man are the stars and each character has a Black partner, Winters tells the story from the point of view of the former slave, the man of color.

That brought about quite a discussion online -- and in the real world, I'd imagine -- about white folks writing about minorities, about the media praising white authors doing what authors of color have been doing for years, about whether "daring" was the right word to use, and so forth. Many of those conversations are exactly the sort that we should be having. This is not the post for that discussion, and I am not the guy for the job. My job is to tell you how good Underground Airlines is as a story.

And it is. Damn good. When I would set the book down and head out to the real world, there was always a second or two of adjustment because of how immersed I was in the story. Not because I was tired. Not because my psychiatrists were adjusting my meds again. No. The story felt real. It feld grounded.

Victor is moving towards his prey, and the story develops as normal detective story, for the most part. We get to see the trunk of gadgets Victor uses. We listen in as Victor and his boss talk about "the plan" and so forth. We see Victor getting close and get scared when he nearly gets caught in lies or doing things he shouldn't. See, Victor works for the Marshals Service, but he still has a chip in his neck. He is, effectively, owned by them. As an escapaed slave himself, he was caught and forced into the service of catching other runaways. This is just one of many conflicts within Victor, who is as fully formed a character as I've seen in years.

Victor's original mission ends pretty early on in the novel. And then things really start to pick up. There's a secret out there that only Victor can expose. The book goes from detective novel to crime fiction to thriller to psychological drama and the reader is never the wiser -- because everything feels authentic to the story.

Near the end of the book, Victor is trapped without any way out. And here's where you can really appreciate what Winters is up to. See, the other Winters book I read was The Last Detective, which Fountain Bookstore in Richmond handsold me a couple years back. That showed me what a good writer Winters is. But in Underground Airlines, when Victor is trapped without an escape plan, he runs through a couple. After some thought, he settles on one. Risky, yes. But, he imagines, it could work. Could it? Would it? It's the sort of plan you and I have seen in action movies. Sure it could work. Victor thinks: And maybe it would have worked. We'll never know because a completely bonkers thing happens and the story takes a big turn I didn't see coming. Winters, the man at the desk writing the draft of the story, seems to be saying something like, "Yeah. I could have done that. I could have written that escape. But this is better."

And he's right. And I think he's right about telling the story from Victor's point of view.

On his website, Winters addressed the concerns he knew people would have:


“I approach the possibility of concern with great respect and humility,” Winters tells me, “and with an understanding that there has been a history of white artists appropriating black voices and black works for their own ends. All I can do is stand behind the work.” For Winters, Underground Airlines comes from a place of empathy rather than exploitation. “I hope people will see that my intentions are good,” Winters says. Then he pauses. “Also,” he adds, “intentions aren’t necessarily enough.


It is clear that the discussion of how -- and whether -- we write from different points of view is worth having. I remember posting a few years back about someone who decided to take up a yearly challenge of reading one author from each country on the globe. We've talked at this blog about non-mainstream authors of color who have written amazing books. Gizmodo had a great post about various alternative history novels you might not know.

The world is full of many, many wonderful books from many different voices. Underground Airlines is one of those books.

What is being lost in this "controversy" is the quality of the book in question. And what angers me is that most of those folks who are complaining haven't read the book - even part of the book - to see if their points are valid.

I agree that this discussion of writing across lines (be they racial, gender, sexuality, etc) is an important and necessary one to be had. And I agree that the NYTs article was poorly worded - especially the headline - but none of that is Ben's fault. What he is responsible for is writing a hell of a novel that made me (and others) look at the subject of slavery in a new way.

As such, I will continue to spread my spoiler-free review of this book far and wide in the hopes that more people will give it a try and realize that Ben is courting community, not controversy: