By Claire Booth
This is the week. THE BRANSON BEAUTY comes out on Tuesday. 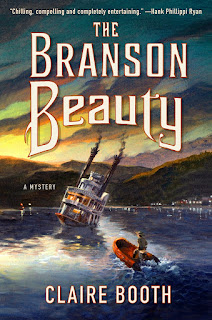 It’s not my first book but it is my first novel, and I’m surprised by how differently I feel about it compared with my nonfiction. I think that’s because the novel is completely mine. The nonfiction was my writing, of course, but the events and the characters and everything else already existed. The book released on Tuesday is all me.
If you’re interested, THE BRANSON BEAUTY will be available wherever books are sold.
Here’s what some people are saying about it:
“Touches of sly humor add appeal to Booth’s standout debut...Issues left unresolved hint at much more to come in what promises to be a most engaging regional police series.”―Publishers Weekly (starred review)


“Former crime reporter Booth imbues her fast-moving narrative, which celebrates its Ozarks setting, with humor and humanity. A promising debut.”―Booklist

I'm so excited for you! I can't wait for this book to hit the world! Congratulations!
Kristi