(This comes from an essay I wrote on Chester Himes' Harlem Detective novel series that will appear next year in a collection of pieces on radical pulp fiction edited by Andrew Nette).

It's his last book, it's unfinished, and it's a difficult book to enjoy, but now is the time Chester Himes' Plan B seems more relevant than ever.  It's the novel in which Himes gives vent to his apparent belief, after years writing in controlled anger, that racial justice through peaceful means is a pipe dream and that only violent revolution by blacks against whites will change the established order. Though it does feature his two series detectives, Gravedigger Jones and Coffin Ed Johnson, Plan B is his novel about this revolution and its possible consequences, with Jones and Johnson playing, in essence, a supporting role.

Easily the most violent of Himes' books, Plan B has a loose plot that follows the doings of Tomsson Black, a black man of humble origins. Through a series of unlikely events, Green becomes a wealthy revolutionary masquerading as a black businessman.  Rich white people befriend and financially support him during his rise to respectability, and he uses their money to buy huge stocks of weapons that he funnels to blacks for his uprising.  The novel alternates between historical chapters tracing Tomsson’s background and contemporary chapters (the 1970's) in Harlem where the revolution breaks out.  Grave Digger and Coffin Ed come into it when they respond to what seems like an ordinary killing in Harlem among junkies.  At the apartment where a heroin addict killed a woman friend of his, they find a high-powered rifle that was mysteriously sent to the man along with an incendiary note. The note tells the weapon’s recipient to learn how to use the gun, wait for instructions, and not tell the police.  It promises that “FREEDOM IS NEAR!!!!” It was then, as both escape and therapy that he [Tomsson Black] had begun moving in the circles of Northern white liberals who needed the presence of a black face to prove their liberalism.

And there were some whites who went about crying publicly…touching blacks on the street as if to express their suffering through contact, and sobbingly confessing their sorrow and begging the blacks’ forgiveness.  There were a few extremists who even bent over and offered their asses for blacks to kick, but blacks weren’t sure whether they were meant to kick them or kiss them, so in their traditional manner, they cautiously avoided making any decision at all.

The citizens of other nations in the world found it difficult to reconcile this excessive display of guilt by America’s white community with its traditional treatment of blacks.  What the citizens of the world didn’t understand was that American whites are a traditionally masochistic people, and their sense of guilt toward their blacks is an integral part of the national character.

The novel has an over the top quality and an apocalyptic tone. Himes pours on the violence and depicts the carnage with gusto.  Blacks massacre white men, women, children, and old people.  Whites talk about bringing back slavery and castrating black males.  They enlist big game hunters to go on “The Black Hunt”.  Blood flows in the streets.  Blacks do not get intimidated and continue killing whites.  It’s as if Himes is indulging in a fantasy long held and until now somewhat suppressed: the ultimate revenge of American blacks against American whites for the legacy of racism and injustice.  No non-violent method of protest has gotten black people to the point they need to be – equal with whites – so the only option left is violence.  At the very least, even with whites striking back, using a tank to level a Harlem house, lynching a man at a concert in Central Park, violence offers black people consolation; they have the satisfaction of seeing white people in constant fear.  The disorder spread through the secret machinations of Tomsson Black provides for a catharsis no peaceful means of protest can equal. 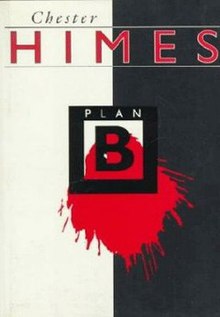 Or does it?  Does this alleged catharsis lead anywhere? For all Himes' expressed belief in the necessity of armed insurrection, Plan B betrays an ambivalence in him.  For starters, the insurrection he lays out, whatever Tomsson Black’s original plans for it, deteriorates fast into haphazard violence.  People given weapons to use, with virtually no one to guide them, run amuck.  Blacks are no different than whites in this aspect.  Near the end of the novel, Tomsson confesses that he should have anticipated this.  The uprising he envisioned has spun out of his control.  Blacks committing their murderous acts against whites has resulted in the United States becoming a field of pandemonium.  How this will end even Tomsson Black can’t predict, but he feels that he must keep distributing guns and “let maniacal, unorganized, and uncontrolled blacks massacre enough whites to make a dent in the white man’s hypocrisy…”

It's possible that this book doesn't get the attention of Himes other novels because he never finished it.  It's conceivable also that Himes stopped working on it because he’d written himself into a corner.  How do you end such a book?  Reconciliation after all the violence would seem implausible, so what do you do instead? Have the whites exterminate the blacks?  The blacks wipe out the whites?  Does Himes really think mayhem like this will lead to racial equality, or is he saying that uncoordinated violence doesn’t work and will never help blacks attain their goals?  Maybe Himes is suggesting that whatever blacks do, they have to get their numbers in order before they mount any serious offensives against the white power machine.  It’s not violence itself that Himes seems to frown on, but violence that squanders opportunity and becomes misdirected.  However it's read, Plan B comes with all the bite but less of the fun of the first eight Coffin Ed and Gravedigger Jones books, but it’s one that even in its extremity should be better known.  It was his last Harlem detective novel and his last novel overall, and for anyone at all interested in Himes or in crime fiction with a strong social bent, it's a must.

Thanks for the post here. I've not read Plan B, though I count myself a fan of Himes' novels generally. Whenever I've taught Cotton Comes to Harlem (one of my favorite books to teach, in fact), we've focused on the blend of satire and violence and anger and humor and amidst all of it the pointed social critiques. This one does indeed sound like all that amped up even further. I'll look forward to reading it sometimes, and again I appreciate the reflections here.