Turning Over the Soil in the Field of Hammett and Chandler

Guest Post by Dana King
First, thanks to Scott Adlerberg for allowing me to use his spot this week. I’ve been a fan of Do Some Damage since it premiered and Scott has made Tuesdays particularly worth reading. This is a treat for me.
Scott asked me to write about the private eye genre. Specifically, “How do you approach it with the confidence you can bring something fresh to it? How do you avoid ‘the anxiety of influence;’ you know, working in a field so well walked on?” 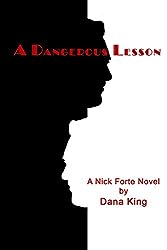 I liked PI stories from the first time I read Encyclopedia Brown or Sherlock Holmes, which naturally drew me to writing them. There was an established canon with its own Pantheon of heroes: Hammett, Chandler, Spillane, Macdonald, Parker, Lehane, and plenty of others. I had no delusions of doing anything they hadn’t done. All I ever wanted to do was to write what I was capable of as well as I could write it.
I never thought of what I wrote in comparison to anyone else until I received some reviews with flattering comparisons, along with a Shamus nomination a few years ago. (I’m not quite done riding that bad boy into the ground yet.) All of that was—and is—flattering, but I still don’t really think of myself in comparison to anyone else, nor do I try to measure up to anyone else, mainly because I know I can’t. Anyone established enough to be a yardstick is a unique collection of superior talents. I couldn’t be any of them if I tried, so why worry about it?
The “anxiety of influence” is a good term; I’m almost sure to steal it. I don’t really have any, I think because I know I can’t be as good as those guys. Frankly, I hope they do influence me. It’s like playing a sport or being a musician. You only get better by playing with people better than you. I read Hammet and Chandler and the others because I want them to influence me, mainly by keeping the bar I strive for higher than I’ll ever attain. That will keep me reaching and should allow me to get better than I would have without their influence.
Along those lines, I’m not one of those writers who doesn’t read in his chosen field when working on a book, for fear someone else’s style will rub off on me. I look for a good rub every time I open one of their books. Not so I can steal anything, but reading the masters while working myself is a good way to remind myself of what I want to accomplish in more or less real time. There are elements of all the greats I’d like to see in my writing—I think most writers have some of that—and keeping them fresh in my mind is a good way to catch myself before I fall into bad habits.

Tests have shown I’m about as left-brained as I am right-brained, so I’m not likely to be someone about whom readers and critics rave about for breaking revolutionary new ground. Considering how much great PI writing already exists, doing something completely different isn’t even necessarily a good thing; there may be a reason no one else has done it. What I hope to do is to learn from those who came before me and adapt what I can from their work to suit my skill set. For example:
I don’t think I use enough of any of their characteristics to worry about ripping them off or writing derivatively. They are always there, though, teaching a master class every time I open one of their books, showing me the direction in which I want to travel, even though I’ll have to take my own route to get there. They climbed Everest, and I’m not going to pretend I can reach such heights. I look for their guidance to keep me from wandering the foothills forever.
BIO


Dana King’s first Nick Forte novel earned a Shamus nomination for best independently produced PI novel in 2013. His newest book, A Dangerous Lesson, is the fourth Nick Forte novel. Dana recently signed with Down & Out Books to publish his Penns River novels, a series about an economically depressed town in Western Pennsylvania.

Scott Note:
A Dangerous Lesson, Dana's newest Nick Forte PI novel, just came out, and you can get it here at Amazon.
Posted by scott adlerberg at 3:00 AM

I'm ten pages from home with A Dangerous Lesson and it's another gem from this guy ... and who's got it better'n him right now? Penguins about to win the cup and a terrific new novel being released.

Dana is one of the most clever writers around these days, FACT. I started jotting down my favorite lines early on for a review and had to stop or I'd be jotting most of the book. Review this weekend on TK, but it's a terrific read, start to finish ... and the recurring characters from his other Forte novels makes it all the more inviting.