The Game is Afoot

I've got a lot going on so strap in and listen up! You might care about some of it!

I've been working on a novel for a couple years. This includes the rewrites, the beta reads, the going back for a ground-up reworking because the beta-reads didn't go the way I'd hoped, putting it aside to come back later, and all the things that usually come with a manuscript that takes a couple years of your life.

And as of Tuesday, I've shelved it.

I've been spending a lot of time recently telling myself that all the other ideas I have can wait, because goddamnit, this project will get done! But the truth is, if it were really that urgent, it'd be done. The other truth is, in the couple years I've been writing and publishing my focus has changed and I'm much better equipped to write this story about nymphomaniac bank robbers than I ever was to tackle soft science fiction.

So here it goes, right?

With a new project almost always comes a new approach. I can crank out a short story in an afternoon, but novel writing has always taken a lot more work and concentration for me. I really want to focus my ability to hit a high word count into writing a novel quickly, and it's time for me to admit that being a "pantser" is just not for me.


So, with trepidation, I set out to write an outline for the current WIP. Looking at all the options and explanations just made me feel like I wanted to hold my breath until I passed out and come back to it later, but I did run across Blake Snyder's Beat Sheet from Save the Cat, and it looked doable. After a long Facebook conversation with Jay Stringer and Bryon Quertermous, I had some actionable advice I felt like I could put to use, and immediately set about making my office look like a serial killer's den. 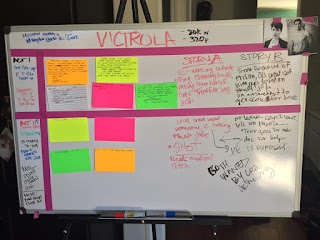 Two days in and I'm feeling like all those brain storming sessions might actually mean something when I hit the halfway mark and start wallowing in my own self-pity.

Haha, just kidding. I don't self-deprecate. But the novel I collaborated with Andrez Bergen is available for pre-order now and the release date is creeping closer.

I had a lot of fun working with Andrez on the Trista & Holt comics that became Black Sails, Disco Inferno, and I'm really looking forward to sharing this baby with the world. You've got a retelling of Tristan & Isolde with crime, disco, and characters I've really come to love (looking at you, Governal). 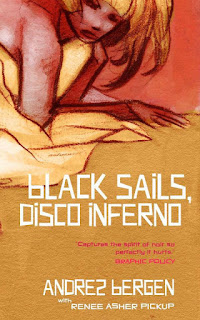 And in my ongoing efforts to leave the house and interact with real humans, I'm once again joining the SWILL crew at Beast Crawl this year. Check out our fancy Facebook invite and holla at me from the bar. We're reading at Longitude this year, same as last, and I can tell you they make some amazing bourbon cocktails at that location. Not only that, but one of my favorite Dirge Staffers (they're all my favorite, who am I kidding) promised to bring a sign and cause a scene, so you don't want to miss that.

NOT ONLY THAT, but holy cats, did you see that lineup? You get me, DSD's very own Holly West, David Corbett, Rob Pierce, and Sean Craven. This thing is going to be wild. Come see us!

Keep plugging away. I wrote up what should be the final index cards last night. This weekend I'll order them and then, hopefully, I let this upcoming project rest for a while.

Eat the elephant one bite at a time.

Thanks, Dana! I've got some of the harder parts to plan actually planned now, so it's looking a hell of a lot more doable than my usual plan which is "I dunno, I'll get there."

Sounds like you have a good handle on the new project and I wish you the best of luck. Although Bryon Quertermous isn't your best choice for advice. He can't even spell "Brian" right. ;-)

Looking forward to meeting you in person at Beast Crawl!