It's true. I don't like fish. I mean, I like English fish & chips when it's coated in batter and doesn't taste like fish. There are certain fish sticks I can buy that are also more batter than fish and therefore palatable. 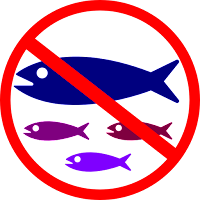 But I don't like fish. I might learn to tolerate it in order to survive if I somehow magically ended up as a contestant on Alone, because let's face it, I'm not exactly survivalist material, but tolerating fish would be a matter of necessity. It would never be a choice.

I started thinking about this when I was thinking about Kristi's excellent advice yesterday about feedback. There's a reason you need to have a threshold for criticism to be taken seriously, and that's because you have to filter out the objective analysis from the subjective opinion.

Outside of my own writing I offer editing and critique services. As a result I've read a number of unpublished manuscripts that I've had to assess. I try to note when something in the feedback is subjective. At that point, what I'm offering is food for thought. I offer it with the clear understanding that it is subjective, and try to ensure the person receiving it knows that it's just an opinion.

However, that doesn't mean that writers don't occasionally argue with me about the objective analysis. For the most part, I've been fortunate enough to work with people who are serious about improving their craft and take the feedback seriously.

Occasionally, the writer takes everything personally. Pointing out spelling mistakes and errors with the use of semicolons and commas is, to them, the equivalent of saying their baby is ugly.

Here are a few extra things I think those seeking and giving feedback should consider.


For those giving feedback:

Don't pull your punches. You aren't doing anyone any favors if you're too focused on hurting the writer's feelings. Be honest and thorough in your assessment of the material you've been asked to critique.

Keep an open mind. I don't like fish. But I didn't know just how freaking much I could love a vampire story until I read an unpublished manuscript that brought me to tears. As far as I know the writer is still sitting on that book, and it's a tragedy. It was an amazing read.

For those seeking feedback:

It's important to understand that the person who's reading your work should be trying to help you improve your craft. If all you want is a bunch of people who say it's wonderful then  you don't want critique partners. You want cheerleaders.

Separate the objective and subjective. There are rules about how to spell words and when to use commas and semicolons. There are also general story structures that are more common in publishing, so a comment about the premature climax may be an objective analysis. A comment about not liking your character's name would be subjective.

Take time to let the feedback sink in. Process it. I know when I received feedback (from a published author) on five chapters of a drafted manuscript I didn't work on that project for a month. I was disappointed. I also had a hard time seeing my way forward, given the comments. It took me a while to process the information, filter out what was subjective and to utilize the feedback to improve my writing.

The stages of feedback:

1. Feeding the Dream. Early on, we often draw support from our loved ones. They will usually provide biased feedback that's filtered through their love for us. This usually isn't objective feedback.

3. Goal-Oriented Writers. Once you're ready to begin submitting to agents and editors you might begin to outgrow your writing peer circle. In my own experience, one group I associated with years ago became very focused on their aspirations. Anyone in the group who had success with acquiring an agent or with traditional publishing soon found themselves on the outside of the group, because the focus was all about those who had the dream of someday publishing. Very little in the group delved into the business of publishing and transitioning from aspiring to published. Some had spent years polishing the same manuscripts. One had been invited to submit their manuscript to an agent and a year later still hadn't done so. They didn't want to face the submission-rejection process, and if you want to be a published writer that's something that you have to go through.

4. Agent/Editor/Select Peers. Successfully published authors tend to receive most of their feedback from other authors who they trust, their agent and their editors.

It can be very difficult to transition from stage 2 to stage 3. At that point, you may want to consider a professional critique. Always make sure the person you purchase these services from has traditional publishing credits to their name so that you know they've gone through a professional editing and revision process and are giving you valid information.
Posted by Sandra Ruttan at 12:31 PM