If you wanted to know what was going on with the contemporary crime fiction scene, you could do worse than Jen Conley’s new collection, Cannibals, but you couldn’t do much better. In terms of story depth and publication breadth, of quality and quantity, Conley’s book will be the one you see listed on your awards ballots. And there’s damn good reason for that.

Conley’s stories have appeared in Thuglit, Needle: A Magazine of Noir, Crime Factory, Beat to a Pulp, Out of the Gutter, Grand Central Noir, Big Pulp, and Literary Orphans, as well as a number of anthologies. She’s been a driving force behind the fiction site Shotgun Honey and a regular Noir at the Bar reader. 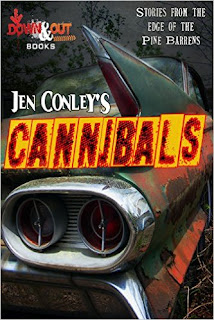 If someone asks you what’s up with crime fiction these days, this is the book you’d buy them.

This collection includes the following stories:

“Home Invasion,” published in Thuglit, was nominated for a 2011 Best of the Web Spinetingler Award.

At Needle, we had the honor of publishing “Finn’s Missing Sister,” which was later selected by the Best American Mystery Stories 2013 as “Distinguished.” Damn right it is.

All of the stories included either won awards or should have.

While I could show you any snippet of any story and have you fall in love with the writing, let’s look quickly at the opening of “Debbi, the Hero,” which will give you a taste of what Conley is doing, and how it is that these stories are so good.


I see that rotten boy who got my fourteen-year-old granddaughter pregnant. I’m just standing here in the 7-Eleven, waiting to pay for my yogurt and coffee, when he walks in with his mother, Melissa, who heads down one aisle, pretending not to see me. I don’t know Melissa well but she never bothered me until after the storm, when I became Facebook friends with her. You know the type—always posting positive inspirational quotes like: God never gives you more than you can handle. Or, I love my son! If you love your son and think he’s the best thing in your world, share! Given the present situation, I find these posts obnoxious. Yes, I unfriended her but she’s a Facebook user who hasn’t discovered the privacy button. Like an addict, I’m drawn to her page, fascinated by her hypocritical posts.
But Melissa isn’t my problem.


Building a contemporary scene. Great details. Character. Intrigue. (Is Melissa nuttier than the narrator?) And then, Blammo. “Melissa isn’t my problem.” A paragraph of quick right jabs setting you up for the left cross you never saw coming.


I drive across town, cursing, my hands gripped on the steering wheel, as I head to my bartending job. That boy needs an old-fashioned ass kicking—and I know plenty of guys who will step up—but that will also get me in trouble. Times aren’t like they used to be when I was a young woman, when people had codes. Now grown men call the police if they’ve lost a fist fight.
A billboard catches my eye: New Jersey. Stronger than the Storm. The town I live in was hit hard by the hurricane. If you Google Sandy and a picture of a bridge in the water comes up, that’s my neck of the woods.

More character development here for the narrator, with the line about grown men calling the cops really nailing the setting and the voice. People had codes. Times were different then. Now everyone is a loser.

And then, again, that left cross. Go to a book festival, throw a rock in the bar and most writers you hit would never have been able to pull off what Conley is about to pull off: telling you where the narrator lives by showing you on multiple levels. The narrator doesn’t live east of here or in the Glenfarful neighborhood. No. Sandy had an impact. The narrator lives in the fallout of that. The picture of the bridge in the water. The tying to the contemporary by way of the search engine, by way of the recent devastating storm, a storm that has devastate the characters in this story in many ways. Though this is the not the only storm to hit. And there are always more coming. You get a sense from just this glimpse of life here. No. That’s not right. Not a sense. You get a feeling. And Conley hits you hard, paragraph after paragraph, story after story.

Cannibals: Stories from the Edge of the Pine Barrens (Down & Out Books) is a strong testament to not only Conley’s skill as a writer, but to the strength of the crime fiction community.

Email ThisBlogThis!Share to TwitterShare to FacebookShare to Pinterest
Labels: down & out books, jen conley, Steve Weddle