A Patricide for the Ages

You never know where you’re going to come across a grisly and riveting crime story.  To get acquainted with an author I long wanted to read but never did, I recently picked up a newly translated collection of novellas by Stendahl called Roman Tales.  The three stories in the book were first published in France in 1839, and the one I want to highlight here is “The Cenci”, Stendahl’s take on a true crime account that dates from the late 1500’s.

In a nutshell, the story is this:

Beatrice Cenci was a teenage noblewoman living in Rome with her father, Francesco; her stepmother, Lucrezia (Francesco’s second wife); her older brother, Giacomo, and her 12 year old brother, Bernardo.  Francesco was a horror.  Whatever the accepted standard of degradations an aristocrat could inflict on common people at the time, Francesco exceeded them repeatedly, and as Stendahl puts it, “Thrown into prison thrice for these perverted affairs, he managed to get himself released by giving two thousand scudi to individuals enjoying the patronage of the twelve popes who succeeded each other during Cenci’s lifetime.”

With his own family, the man was no better.  He had a violent temper and a cruel disposition and mistreated everyone in the house. People in Rome knew he had abused his first wife and that he did nothing to help or support his three eldest sons who had left the house.  The one “virtuous deed” he did during his entire life was to build a church in the courtyard of a palazzo he had near the Tiber River, but the building of the church came about because of his “extraordinary desire to have beneath his eyes the tombs of all his children.”  Apparently he hated all his children and would tell the workman who built the church, “That’s where I want to put them all.”

Then there was Beatrice, the younger of his two daughters.  Her sister had found life with her father so unbearable she arranged for a message to be given to the Pope begging him to marry her or have her placed in a convent – anything to escape the house.  The Pope, who knew what kind of man her father was, did arrange to have her married and forced Francesco to give her a large dowry.  But her getaway, without question, made things worse for Beatrice; her father determined not to let Beatrice do to him what her sister had. 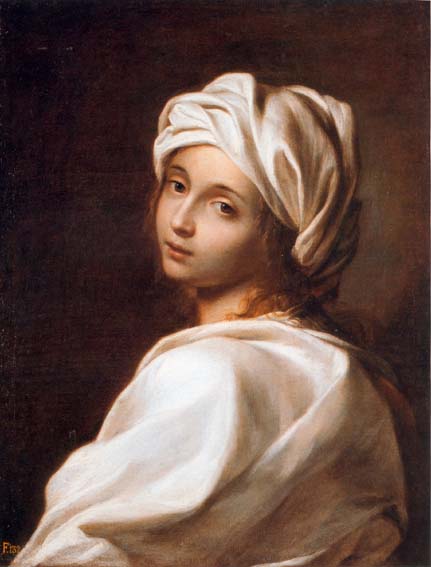 From that point on, Beatrice’s life became a living hell.  She was fourteen.  Her father confined her to one area of their palazzo and allowed no one to see her.  He brought food to her himself.  And it was during this period, according to what most people think based on the historical records, that he began raping her.  He tormented her constantly, sometimes in the presence of her stepmother, and as Stendahl writes, “He often spoke to her of the treachery of her elder sister, and, working himself into a fury by his own words, ended by raining blows upon Beatrice.”

Beatrice tried to do what her sister did and get a letter to the Pope about her father, but it never reached its destination.  It's possible her father or one of his servants intercepted it.  In any event, that document vanished and it's a big part of the story because later, when she and her stepmother were in prison for the murder of Francesco, Beatrice's lawyer could have used the document to provide evidence of the atrocities going on inside their castle. In Stendahl's words, "Was it not clear to everyone that Beatrice Cenci had a legitimate defense?"

With no help forthcoming, Beatrice and her stepmother knew they had no one to rely on but themselves.  They began to formulate the plan that "brought about their downfall".  Well, downfall, yes, it would end with their public execution, but one cannot overlook what Stendhal dryly adds - that their idea "did, however, have the advantage of putting an end to their suffering in the world."

The murder plot involved Beatrice, Lucrezia, and both brothers still living at home.  It also included two of the family's vassals who detested Francesco, one of whom had become Beatrice's lover.  On the night of September 9, 1598, when Francesco was staying at the family's country estate where he had sent Beatrice and Lucrezia after Beatrice's attempts to contact the Pope, the mother and daughter managed somehow to slip him opium to knock him out and then let the two vassals into the castle to finish him off.  Neither could do the job, however; when they saw him, in effect an old man, lying asleep and helpless in his bed, they each balked.  According to Stendahl, their cold feet infuriated Beatrice. She called them cowards.  To make matters worse, she and her mother had agreed to pay the two men to help them with the murder. In the end, Beatrice, Lucrezia, and both brothers used a hammer to bludgeon Francesco to death, and then they dragged his body out of the bedroom and through the castle before throwing it off a balcony to make his death look like he had slipped and fallen late at night on his way to the outhouse.  His body landed, and got stuck, in a tree.

What followed after that was complicated.  From the moment the body was discovered the next morning, no one believed Francesco's death had been an accident, but not much happened in the way of investigation until the papal police got wind of things.  They arrested all the suspects, young Bernardo included, and started their work.  They tortured Beatrice's lover to death, but he revealed nothing.  At the same time, a family friend who knew of the murder interjected himself into the action and ordered a hit on the other vassal to prevent him from possibly talking. You can only imagine what this friend must have thought of Francesco to go to bat for a teenage girl who'd committed patricide. Unfortunately, there was a washerwoman who on the night of the alleged killing had received a bloodsoaked sheet from Beatrice, and her deposition to the authorities helped sink the Cencis.  After a lot of legal wrangling, a papal tribunal found them guilty and sentenced them all to death.

Even during this period, though, not unlike today, there were protests against unpopular verdicts.  The regular people of Rome knew the motivations behind the murder and didn't agree with the sentence. Stendahl writes that cardinals and princes kneeled before the Pope on the accused's behalf.  He granted a stay of execution for twenty-five days, and during this time Rome's leading lawyers (acting pro bono we can assume) joined together to present a defense of the Cencis to him.  It all went for naught of course, and the Pope ultimately rejected all pleas for the Cencis.  It's thought that Pope Clement VIII, besides dwelling on the specifics of the case, feared that this patricide would encourage murders within other families.

As you might expect, the executions of Lucrezia, Beatrice, and her elder brother Giacomo were gruesome.   A large crowd attended. This happened in Rome on the morning of September 11, 1599. Giacomo, tortured in his cart all the way to the scaffold, had his head crushed by a mallet, and both Lucrezia and Beatrice were beheaded by axes.  Beatrice the executioners did last.  The only one spared was twelve year old Bernardo, though he was brought to the scaffold and made to watch the execution of each of his relatives.  Stendahl describes how the little boy fainted more than once during the proceedings.

Ah yes, it's a tale with enough corruption, familial horror, and overall grotesquerie to suit any contemporary taste, and I thoroughly enjoyed reading Stendahl's coolly told account of it.  As a matter of fact, his Roman Tales collection contains three true crime stories from Italy in the sixteenth and seventeenth centuries, and each one, as he tells it, proves compelling.  I'm glad I picked the book up and lost myself for several days in the trials and dysfunctions of the long ago past, which, really, aren't all that different from the trials and dysfunctions of today.

P.S: The Beatrice Cenci story has been the inspiration for a bunch of stuff.  There have been numerous plays, operas, and novels derived from it, and the picture shown in this post is a well-known one of Beatrice by Italian painter, Guido Reni.  This painting shows up in David Lynch's Mulholland Drive in Ruth Elms' apartment (Ruth is the aunt, perhaps seen, perhaps not, of Naomi Watts' character), and for those who might want to check out yet another telling of the Cenci story, there's one by Italian filmmaker Lucio Fulci called Conspiracy of Torture (1969) that stays quite close to the historical record of the events.  Fulci, best known for his horror movies like The Beyond and Zombie, maintained to his death that among his many films one he was quite proud of was Conspiracy of Torture.