Holly's note: I'm proud to be a part UNLOADED (Down & Out Books) and thankful to editor Eric Beetner for asking me to contribute. I'll be writing a post about the origins of my own story, "Peep Show," next week, but this week I wanted to give Eric a chance to tell us about the origins of the anthology itself. UNLOADED is available for pre-order now and officially drops April 18. 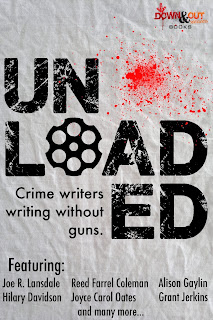 I first got the crazy idea for an anthology of crime stories without any guns back in the aftermath of the Sandy Hook school shooting. I was outraged, as many Americans were, by both the inexplicable violence and also by the circling of the wagons by the NRA and other pro-gun groups to immediately make it about them and their rights to gun ownership. The idea that maybe this nut case shouldn’t have had such easy access to the weapons he used was a non-starter.

I put aside the idea, thinking that it wouldn’t make any difference to make a book and by consequence, make a statement. Then there were more shootings – at movie theaters, military bases, workplaces, shopping malls. And I realized that the argument against even doing something small played right into their hands. The argument I so vociferously disagreed with was the same argument I was telling myself. If it doesn’t stop all violence, then why bother at all? I wanted to bother.

Violence has always been with us. Gun violence has been around since the invention of the firearm. It won’t stop. I know that. Our little book won’t stop it, won’t move the dial in Washington, most likely. But to do nothing just wasn’t tenable any more.

And I noticed that other writers felt the same way. And we all felt helpless. We’d rant on Twitter, post links on Facebook. I felt we needed to do more. UNLOADED was born.

1) I don’t want to take away all your guns. I believe strongly in limits, in more rigorous background checks, in closing loopholes, in making guns harder to use for anyone not the owner, for more training, and for restrictions on guns clearly manufactured for military use.

2) I know a collection of short stories without any guns in them is a small gesture.

The thing is, myself and the other writers included in Unloaded began to worry that we were a part of the problem. That we glorified guns in our writing. That we added to a culture obsessed with guns. We wanted to speak out and say we know the difference between fantasy and reality, and we want reality to look a little less like the violence-filled fantasies in our stories.

The writers I reached out to came on board the project enthusiastically and without hesitation. We represent gun owners and non-owners, Democrats and Republicans. We represent the overwhelming majority of Americans who feel that some greater level of gun control is needed and that the mass shootings that occur far too regularly are a product, yes, of mental illness, but also of a culture that accepts guns and gun violence as a cost of our freedom. And we feel that our current gun culture is not anywhere near what the founders intended – a direct repudiation of the NRA position that the home stockpiles of weapons and the ease by which we can get guns would make the founders proud somehow.

And we used the greatest weapon at our disposal – our words.

This collection is intended to thrill and excite. My intention was always for the readers not to even notice the absence of guns, and maybe in some small way, to open a dialogue that if we tried to reduce the prevalence of guns in our everyday life the way we have all done in our fiction, even for a brief time, then maybe we could see another way.

And though I know it’s small, the old arguments ring hollow to me now. Because if we can save even one tragic accident, one mass shooting, one disgruntled ex-employee, one suicidal teen…then one is enough. Even saving one is better than staying silent, because staying silent is the same as seeing someone load a gun and saying nothing.

Unloaded is out April 18th and it contains original stories, and two reprints, from some of today’s top crime and mystery writers. All writers donated their stories and all profits will go to benefit the non-profit States United To Prevent Gun Violence (www.ceasefireusa.org)

The ebook is up for preorders on Amazon and eagle-eyed readers may notice the print version is already available early.

Eric Beetner is the author of more than a dozen novels including RUMRUNNERS, THE DEVIL DOESN’T WANT ME, DIG TWO GRAVES, WHITE HOT PISTOL and THE YEAR I DIED SEVEN TIMES. He is co-author (with JB Kohl) of ONE TOO MANY BLOWS TO THE HEAD, BORROWED TROUBLE and OVER THEIR HEADS and co-wrote THE BACKLIST with author Frank Zafiro. He lives in Los Angeles where he co-hosts the Noir At The Bar reading series. For more visit ericbeetner.com.

This is a great idea and an excellent cast of contributors. I know exactly how you feel, and have wondered myself if my use of guns to resolve most of my stories might be contributing in its way, at least to the tone of popular culture. (Not that I'm Michael Connelly or Lee Child in my readership, but there's an atmosphere to which we all contribute in some small way.) I didn't realize until the first draft of my recently finished manuscripts was complete that there were no guns in it at all, so maybe there has been an influence on me.

Best of luck with this. It's a great idea.

What I've wondered, in relation to this anthology, is whether, by taking guns out of our stories, we've actually added fuel to the argument "Guns don't kill people, people kill people."

It cuts both ways. The "guns don't kill people; people do" argument is true at a superficial level. No gun has ever deliberately killed a person without human intervention. The real argument centers around the fact that guns are about the only thing one can buy that kills when when used as intended. That's not to say there aren't other uses, but that's why they were invented and refined.

I think what a collection such as this does is take the discussion to that next level in two ways. True, it's people who kill people, but we also need to remove some of the aura that guns are inherently cool. My objection with a lot of books is that they glorify the badass hero who shoots and takes names. Let's show there are other ways to kick ass.

That argument is so steeped in bullshit. Of course people kill people. A gun is a tool, like any other. The difference being that a gun, when properly used for its intended purpose, kills. Sure, someone could go into a school with a knife or a hammer and cause mayhem and death, but not with the same body count. It's the seatbelt argument too. Cars kill people every year, sure, so we implemented safety precautions. People fought against seat belts when they first came out. Now it's a non issue. The fact that you can't even approach the gun issue in this country is what bothers me. Most people agree that tighter restrictions and more safety precautions are a good thing, but the gun lobby is so powerful that it's a non starter from a legislative position. It's frustrating that I have to fear that my children's school is too exposed to a mad man with a gun just so somebody can claim their 2nd amendment rights to own a stockpile of weapons. And I know the vast majority of gun owners are responsible, reasonable people. This is a fringe element who is making it difficult for the rest of us, but sometimes to work in a society, you need to take one for the team and live with more restrictions that maybe you would like when it's for the common good.

As a gun owner, it frightens me how easy it is to acquire military weapons. I know people who've been committed who bought an AR style rifle after getting a doctor's note. A majority support universal background checks, but the arms lobby has blocked that, blocked tracking guns sold to criminals by "problem" dealers, and blocked research into gun violence.
The usual answer presented without evidence is that "criminals know where to get guns illegally." Yes, because it's legal to make private sales without background checks. Because gun sellers aren't required to ask "Are you buying this for someone else who is not legally able to buy a gun?" You'll never stop all illegal sales. Stop lights and insurance cards don't stop ALL car accidents, but laws reduced them by 50-75%.